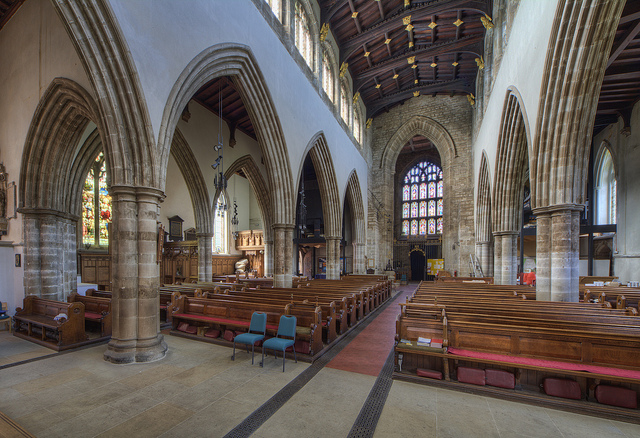 View of the nave to the great west tower arch

Loughborough is our largest town in the north of the county and it expanded a great deal during the Industrial Revolution, from 1801 to 1831 the population doubled to 10,969. It is the administrative centre for Charnwwod district and has a population today of 59,000.
Mentioned in the Domesday Book the village began life as a Saxon village and the town is probably named after a certain ‘Lehedes’ and the second part ‘borough’ means a fortified settlement or ‘burh’. So we have eventually Loghborough. Today it is probably most famous for its large University which specializes in sport amongst other things. 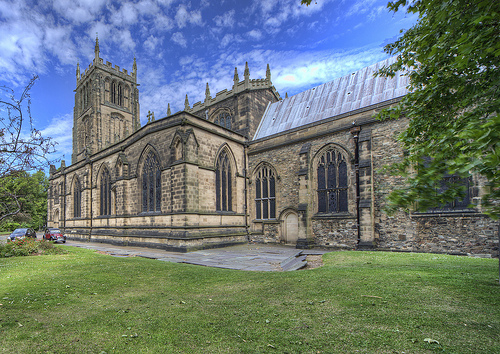 Exterior south view, the tower has the most interest

It also has John Taylors Bellfounders which can trace itself back to the 14th century, and of course All Saints has a fine peal of bells made by Taylors. There is also the Carillon War Memorial and a few small museums in the town which are worth a visit. Talking of visits, Thomas Cook made his first ‘excursion’ from Leicester to Loughborough in 1841, it cannot have been a very lively affair as it was a temperance group.
The church itself is sited in the oldest part of the town but it does not have the character of Market Harborough or Melton Mowbray. The oldest fabric dates to the 14th century (around 1330) but it may well have replaced an earlier Saxon and Norman structure on the site. 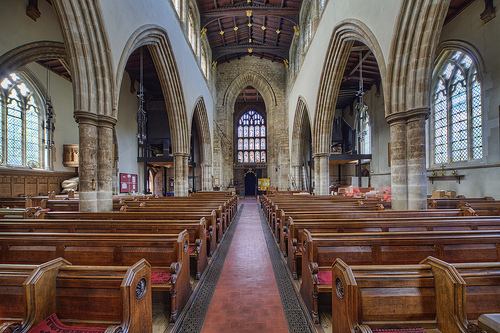 Nave view to the west arch. The acrades date to around 1330

The church has a grand west tower, two storey south porch, nave, north and south aisles, transepts and chancel with later additions. It is for all intents a large parish church that has grown with the fortunes of the town. The west tower with its pinnacles dates from around 1450 when it was heightened and the clerestory added. The impressive west tower arch inside leads to the fine nave roof which angel has figures playing instruments. The chancel is perhaps the oldest part of the building and is slightly offset with the later nave. There are no grand monuments but there are some interesting memorials and in the chancel is the piece for Joanna Walters (died 1673) showing a woman with two babies in shrouds. There are remains of piscina in the 14th century transepts and the font is Elizabethan. 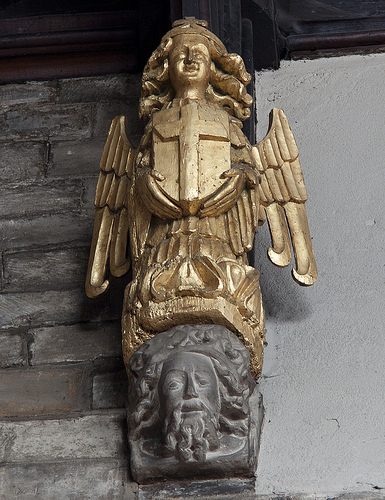 View of one of the carved angels.

Until 1859 the church had box pews and galleries but the Victorians completed several ‘restorations’ during their tenure and these were removed as well as a triple decker pulpit. From 1860-63 Sir George Gilbert Scott completed a large restoration of the building including all the furniture. A few years later a vestry and organ chamber was added to the north side. In 1962 and 1965 there was some work completed by George Pace on a nave altar and organ and choir stalls installed at the west end of the church.
There is limited parking near the church and of course there are plenty of places to get refreshments in the town. I believe the church is usually open and it is worth a visit if you are in the town. There are other churches in Loughborough and I hope to add these at a later date.