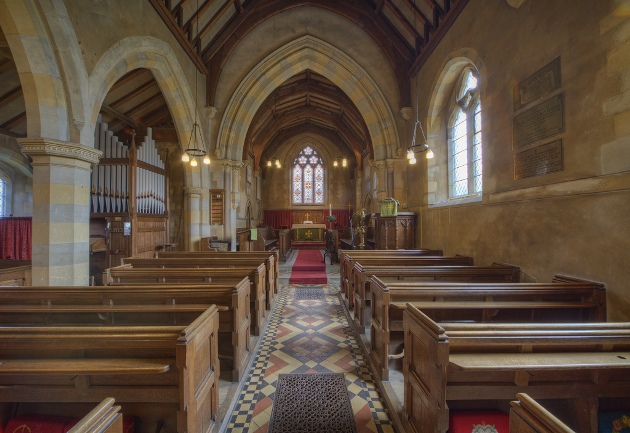 Leire’s nave and chancel with the two colour stonework

This entry is probably going to have to be ‘short & sweet’, my usual sources for information have little on Leire or the church of St Peters that sits in the middle of the village. Most of this information has come from the Leire.net site. The village has a population of around 500 and is 10 miles south-east of Leicester. The village name may derive from the old British name for the Soar, a tributary of which has its source to the south of the village. The village was mentioned in the Domesday Book when the number of households was around 20. 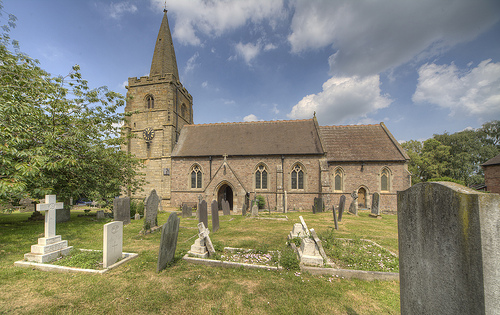 South view of Leire Church with its squat tower and recessed spire.

St Peters has a west tower with spire, north aisle, nave, chancel and south porch. The oldest part of the present church is the 14th century ashlar tower, the rest was rebuilt in 1867-68 when the rest of the present church was built to replace an earlier structure.
The architect was William Smith from Drummon Street in London, he added the north aisle and rebuilt the church with granite and syenite. The four bay arcade with its layered coloured stone is similar to Gilmorton – in fact it was the same architect who also want on to rebuild the church at Shawell. The floor is of encaustic tiles with soft wood boarding being used in the pews and choir stalls, all the woodwork is of oak. 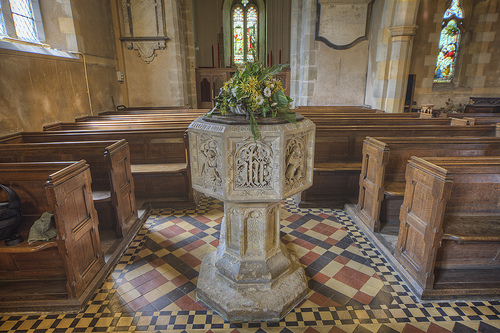 The font predates the Victorian rebuild of the church, only the tower is medieval

There is one interesting monument to a Susannah Smith (d1792) which has Father Time scything down time. The memorial and font predate the rebuild. Nikolaus Pevsner mentions in his entry that the church seemed ‘gloomy’, I have to agree but this is probably due to a lack of a clerestory. There is parking outside the church but it is usually locked. There are facilities in the village with two pubs.