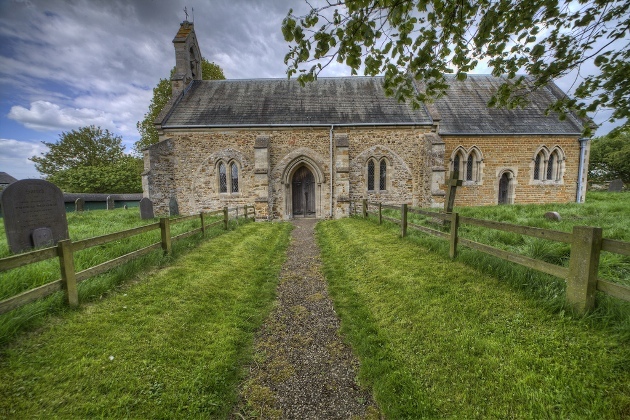 St Luke’s at Laugton. A small church heavily restored by the Victorians

Situated some 5 miles west of Market Harborough in the south-east of the county the small village of Laughton is recorded in 2001 as having a population of only 80. The Laughton Hills to the south of the village rise to over 550ft and there are some good walks around the area.

Its nearest neighbours are Gumley and Moseley with also Foxton and Saddington Reservoir to the north nearby. The village was recorded in the Domesday Book of 1086 and by the start of the 13th century the manor was held by the Earl of Leicester. It passed through many distinguished families in the 14th and 15th centuries and you can read more on the history of the village via the link at the excellent British History website below. 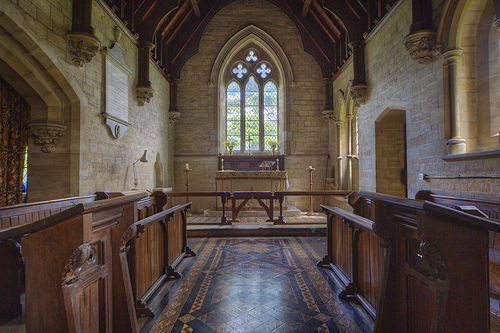 The small Victorian chancel of 1879 with its clear windows allows plenty of light to enter.

The church of St Lukes consists of a chancel, nave, bellcote, vestry and south porch and is built of cobble walling and ironstone. It is understandably a small church for this small rural village and although some parts of the fabric dates from the 13th century there has been much restoration in the 18th & 19th centuries when the north and south aisles were demolished in 1784. In fact until this date the church was substantially larger. 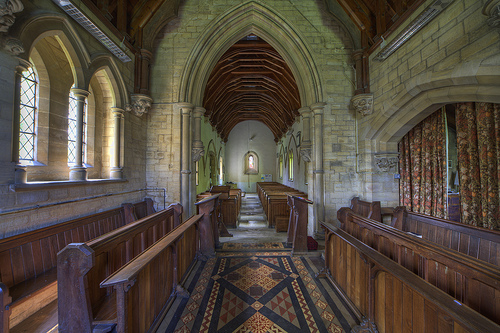 The view from the chancel through the nave to the 13th century west wall.

The west wall of the nave still retains cobblestones and dates from the 13th century, there is an external projection below the bell-cote and this is pieced by a narrow lancet window with a round-headed arch. The arcades of the previous aisle are now incorporated into the walls of the nave and consist of three bays. These can clearly be seen in the pictures below.

In 1879 a general restoration was undertaken by a Charles Kirk of Sleaford at a cost of £1,400. The chancel was rebuilt and the north vestry was added. The nave was re-roofed and new lancet windows were inserted. Also the clerestory added in the 15th century was removed at this time. The furniture dates mostly from the Victorian period.
In the churchyard on the west and south sides are surviving mud walls which were restored and are still in situ, these are very rare and the church is worth visiting just to view these. 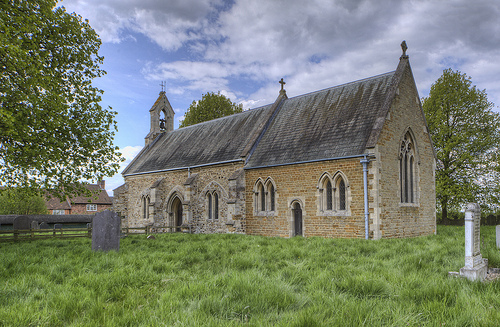 The village has no amenities itself but nearby Gumley and Moseley each has a pub for you to visit. There is limited parking outside the church on Main street.
St Lukes is an interesting church because of the fact it has lost its aisles and even its clerestory and it has therefore been much reduced in size. In 1841 the population was recorded as 180 in the village but within 80 years it had reduced to 87, a dramatic fall. Like all agricultural villages many jobs were lost to mechanization and many people left to find work in the towns and cities. Laughton perhaps no longer required such a large church and they took the opportunity to turn it into a smaller chapel when most other villages kept their churches usually to the same size although also suffering from de-population. For this fact the church is worth a visit.
The church is open during daylight hours.