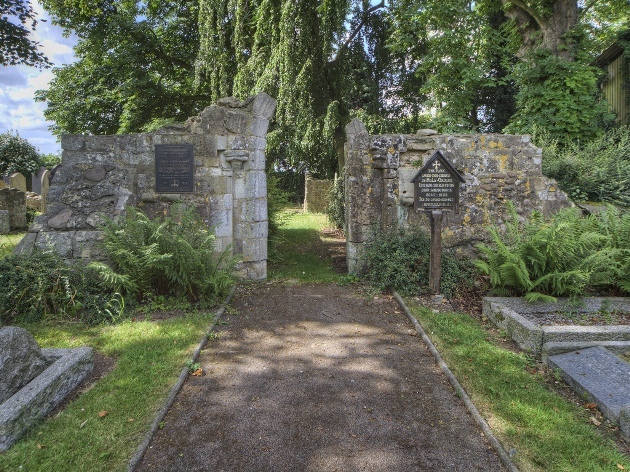 The pretty ruins of Knaptoft Church

Today Knaptoft is a small hamlet of a few houses and farms in the Harborough district some ten miles south of Leicester. It was once a much larger village but most of it was deserted by the 17th century. The only visible remains from the original village are some farm buildings, the medieval fish ponds to the south (restored 1976-82 and now commercial fishing) and the ruined parish church. You can make out earthworks around the east of the church where perhaps the village originally stood. 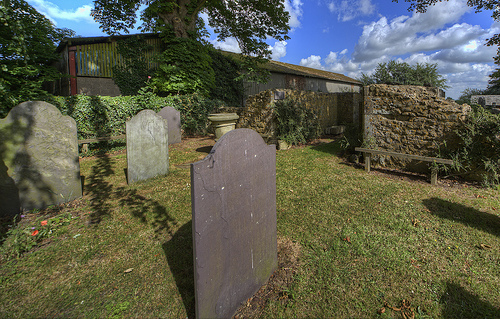 The village was recorded in the Domesday book as Cnapetot and in 1301 was known to comprise a windmill, 2 fish ponds, 20 tenants and a manor house. The farm house to the south-west is thought to be the site of the previous manor house. Why the village became ‘deserted’ is a matter of conjecture. I expect there was more than one reason why the village became depopulated, but enclosure in the 16th century probably sealed its fate. The Horton family held the manor from 1279 until 1761, a Henry de Horton built the manor house next to the church in 1279, this was demolished in 1761 and a new house built on the site. 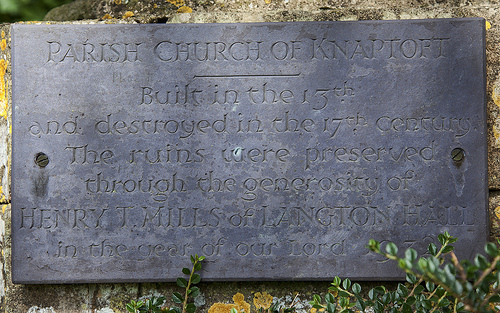 The now roofless church of St Nicholas probably consisted of a nave, chancel, large north porch and south doorway. There could also have been a small porch to the south. From the remains it is difficult to be entirely accurate. There are some carved stone that looks particularly fine in the north nave wall and the chancel arch pillars are in place. The nave is filled with headstones and the urn shaped font is still in situ. In the chancel a once great tree grew, this has now been capped with a stone monument. The tower originally sat above the north porch – a peculiar arrangement but similar to the church at Owston (which I will be visiting soon). 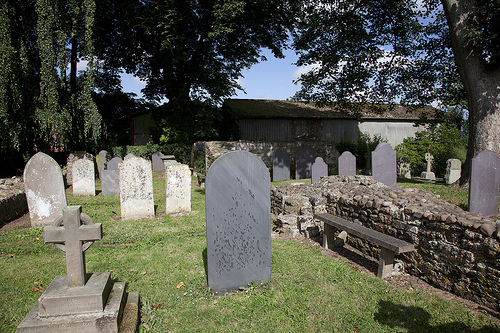 The church fell into ruins during the middle of the 17th century, tradition states (as well as the information on the plaques) that the church was sacked and destroyed by Oliver Cromwell’s army after the Battle of Naseby in June 1645 whilst chasing fleeing Royalist troops who were trying to escape to the Royalist stronghold at Leicester. There is some evidence to suggest it was also damaged by fire. Personally I am too sure of the Naseby connection; during my visits around the churches (especially in south Leicestershire) many seem to have some tradition of soldiers sharpening their swords, damaging the churches before and after the battle at Naseby. I expect the church fell into ruin without the soldiers help and I expect by the Battle of Naseby this process was already well underway. 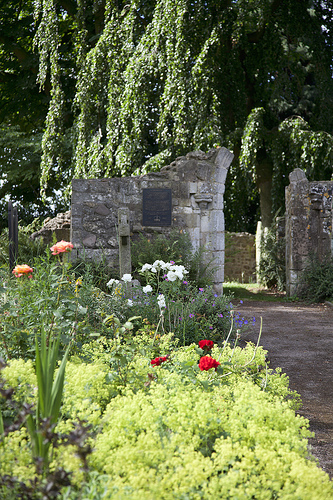 The pretty gardens are well maintained.

Today the churchyard is a beautiful memorial garden which must take much care and it is a quiet and reflective spot. A new stone monument stands in the middle of the lawn and there are other headstones dotted around. The churchyard was and still is used for burials and occasionally the church is still used during the summer for open air services on a Sunday.
There is a car park by the church but no amenities in the village itself, Mowsley is probably the nearest place with a pub. Please visit Knaptoft especially during the summer when the gardens are in bloom and you walk around the ruins. There are plenty of seats in the garden so sit yourself down and relax and take your time here and keep an eye out for the ghost, a tradition of course but you never know.