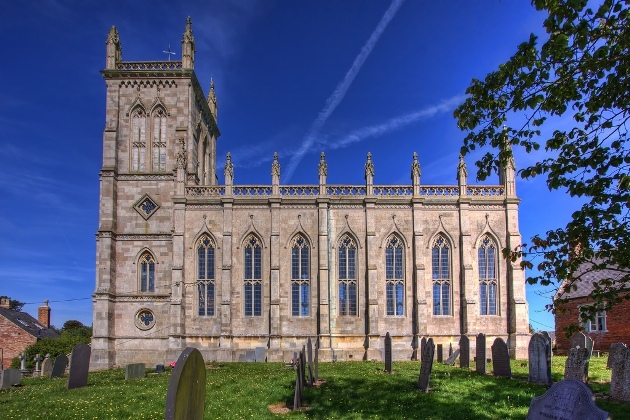 Perhaps the most beautiful church in the Midlands

Perhaps the most beautiful church in the midlands region and one of the finest parish churches in the whole of the England. This Gothic Revival Church started in 1760 was completed in 1761 by John Wing the Younger of Leicester and it is a masterpiece of Gothic architecture. But let us start as I always do with some background information.
After the Norman Conquest in 1066 the manor of Kings Norton passed to the Earls of Leicester, then through various families until in 1600 the Whalley family acquired the large estate at Kings Norton and built the manor house. The Fortrey family then became the estate owners when William Fortrey inherited the estate from his mother a Whalley, and he was the builder of the present church. In the 20th century the land was sold to the Cooperative Wholsesale Society who then split the land and sold this to W.H Heard and Wyggeston’s Hospital. The village has always been small and the population is around 70 people today. It is nearly 7 miles south-east from Leicester in the rolling hills of rural Leicestershire. 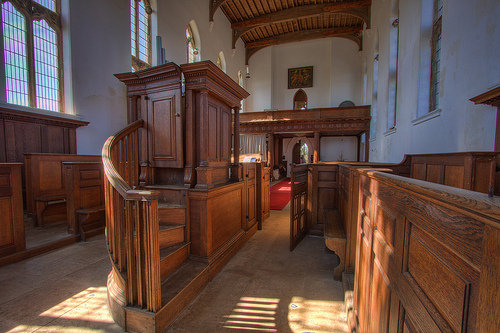 The Georgian interior is mostly unchanged since the church was built

There was a previous church on the site which was maintained by the convent at Ouston and consisted of a nave, chancel, tower and north and south aisles. It fell into decay and the faculty granted for the work states that it was beyond economic repair and the foundations on the south side of the buildings steeple had given way. William proposed a new church and would pay for the building from his own funds which amounted to £20,000.
The driving force behind William’s passion was his interest for campanology (bell-ringing). In 1741 he had the nearby church at Gaulby rebuilt (see entry on this) with its ornate tower and pinnacles by John Wing the Elder who’s son would go on to build the church at Kings Norton. The church at Gaulby is perhaps the template for the later church at Kings Norton, both with their grand towers and in the Gothic style. 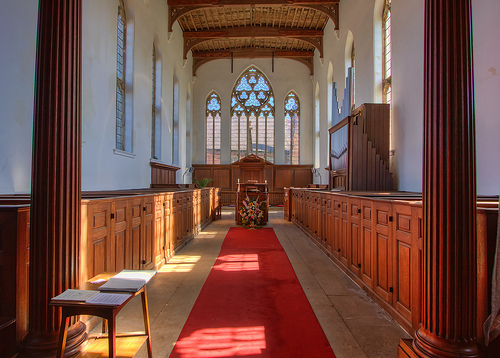 John Wing the Younger started the building work in 1760 and completed this the following year in 1761, however the spire took another 14 years to complete. The tower is built of brick with Ketton stone from Rutland as the facing material and this was used on the outside of the nave and chancel these being all in one. The church sits on a hill within the village and with the original tall spire it was bound to be struck by lightning which it was in 1843, the villagers raised £191 to restore it. Then on 13th May 1850 the spire was struck again, but this time there was extensive damage to the roof, structure and interior and it was felt best not to rebuild the huge spire and have any more strikes. The 18th century font was destroyed by the last strike as well as the organ and new items were installed. At the east end of the church in-front of the window there is a fine monument to William Fortrey and his mother. 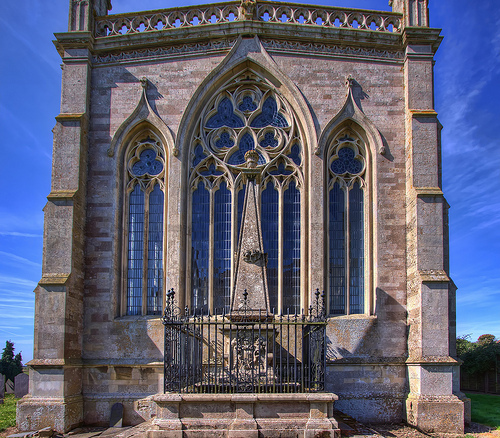 On the inside the beautiful large windows give plenty of light into the church which consists of a long high nave and chancel in one with a gallery supported by wooden Doric pillars at the west end. The Georgian interior is mostly untouched from the original build and the rich Norwegian Oak with the white washed plastered walls makes a most pleasing sight. On my visit parishioners were making the church ready for the Harvest Festival and the display of flowers and vegetables in-front of the grand three tiered pulpit has made for some great images. 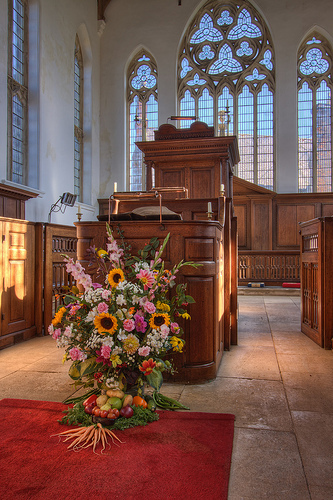 The Harvest Festival display in front of the fantastic pulpit

This church has to be one of the highlights of Leicestershire and Rutland, it is a beautiful building that you cannot but admire and this applies to the interior as well as the magnificent exterior. Even if you are not interesting in architecture or churches I am sure you would enjoy a visit to this church.
There is parking outside the church but access for wheelchair users is hampered by a flight of steps to the church. There are no facilities in Kings Norton itself but there is a public house at Illston on the Hill nearby. Also note the drive from Illston on the Hill to Kings Norton gives wonderful views of the church if you are coming from that direction. If you do visit this church also visit Gaulby nearby being the other church built by the remarkable William Fortrey. The church is open every Saturday from 14:00 – 16:00 during the summer months (May-end of August).