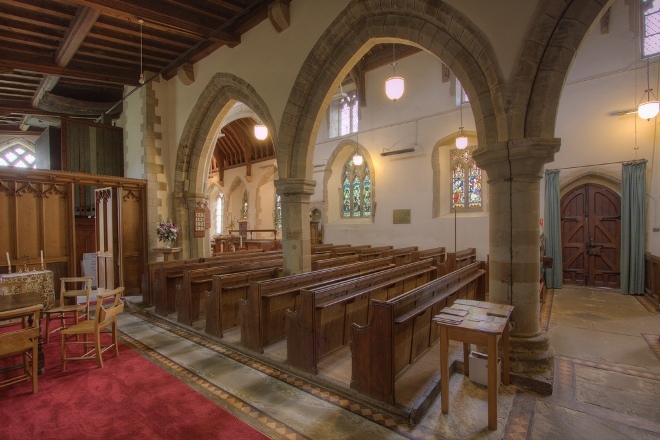 View from north aisle to nave and south entrance

Kimcote and Walcote have a combined population of around 550 according to the 2001 census. These two villages although separate have very close links and are 12 miles south of Leicester and 9 miles west of Harborough. The nearest town is Lutterworth which is just a few miles away. Walton once had a chapel dedicated to St James but this probably fell into disuse and was no longer used after 1630, as far as I am aware there are no visible remains of the old church at Walton. It is recorded in 1219 that a priest names Adam held mass three times a week at the chapel in Walcote. 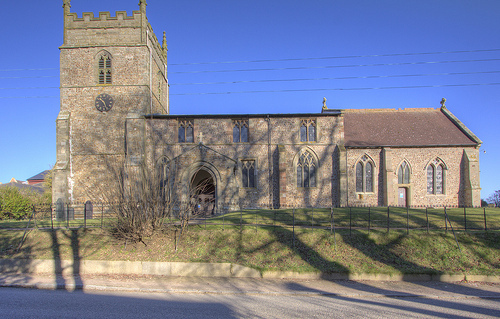 South view of All Saints in the small village of Kimcote

The present church at Kimcote dates from the 13th century and the oldest part of the church is the chancel whose window design suggests a date earlier than 1300. The church consists of a low west tower, nave, north aisle, chancel and vestry. The north aisle dates from around 1340 and can best be seen at the west end. Further east the wall was replaced with four pillars and a chantry chapel was installed in the east end as can be seen from the piscina in the vestry and in the old alcoves in the wall.
The church has the remains of a rood loft and the entrance to the loft can be seen on the stairway in the south wall by the pulpit, at the Reformation nearly all rood lofts were removed. On the south wall we also have a ‘leper squint’, this was used by the parishioners who were ill or outcasts to view the mass through the wall from outside without being near to the main congregation inside, it probably dates from the 14th century. The roof and clerestory date from the 15th century. 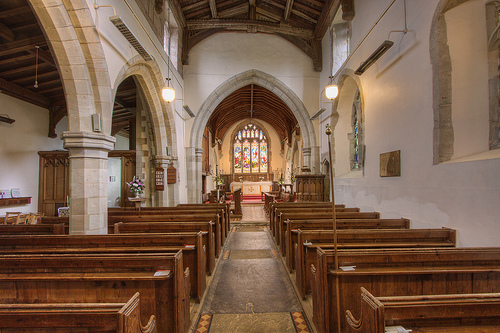 The church underwent a major restoration in 1642, at around that time the font was desecrated and the cover removed, by 1654 the font was restored. The church originally had a steeple but this fell into the church in 1771 and the tower was rebuilt without one. There may have also been further damage to the font after this event.
In 1869 the Victorians completed a restoration with the lead roof being replaced by slate and a heightening of the pitch. There were also changes to the number of lights in the east window. One of the windows in the south wall of the chancel is by Theodura Salusbury. In 1905 the belfry screen was restored, and in the 1950’s a screen was placed across the east end of the north aisle closing off the vestry. The most recent alteration was the widening of the altar to the same width of the east window. 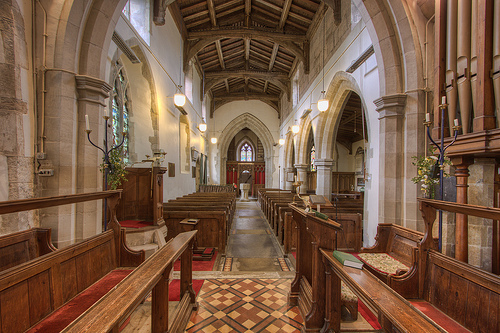 View to west end of church and nave. Below right north view of church externally

All Saints is a pretty little church set in typical Leicestershire rural village. The interior is well cared for and has much character, although restored by the Victorians it has been completed sympathetically with regard to earlier fabric. The leper squint and the perpendicular roof are examples of this. There is parking on the road outside but the church is normally locked outside of normal services. The nearest place for refreshments is the pub at Walton or a selection in nearby Gilmorton.