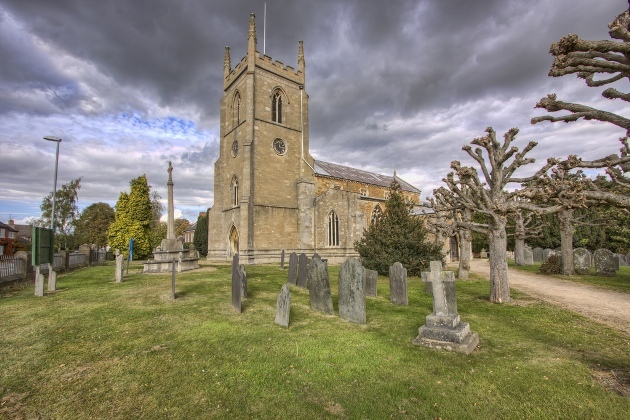 St Wildrid’s at Kibworth from the south-west

The two villages of Kibworth Harcourt and Kibworth Beauchamp are some 8 miles south-east of Leicester. The busy A6 separates the two villages which are so close together we may as well call them ‘Kibworth’ for the rest of this text. There is only one church and that is St Wilfrid’s although there are two parishes. Population in 2001 for both villages was around 4,800. There are plans to expand the village with large developments (some of which are already in progress) right the way through to 2012 with 610 houses. Although this building plan was understandably opposed by the villagers it is only right that all villages take a fair portion of the new housing that is required in the county instead of the usual decisions of building most of it around already crowded areas such as Oadby, Wigston, Blaby etc. Personally more rural villages should take more housing of all types. Anyway I digress……..social comment is not really appropriate for the site so lets get back on track with the church. 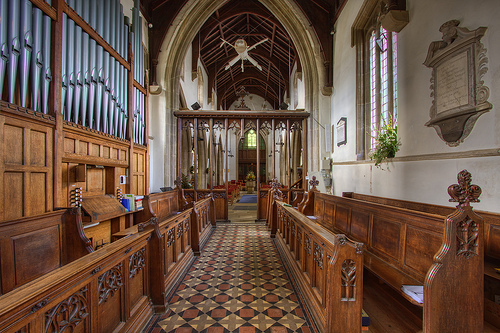 View down chancel to nave and west tower.

The two names of the villages Beauchamp and Harcourt are families that held the manors. The ‘de Beauchamp’ family held the manor as Chief Pantelers (banner carrier, dresser, butler) to the King on the day of his Coronation, this Norman Family held the manor after the Conquest. In the 17th century the manor passed to the Halford family. The ‘de Harcourt’ family also of course Norman held the manor in the 12th-13th centuries. In 1271 most of the manor was bought by Walter of Merton for the endowment of his new college in Oxford. Today land and property in the village is still held by Merton College at Oxford. 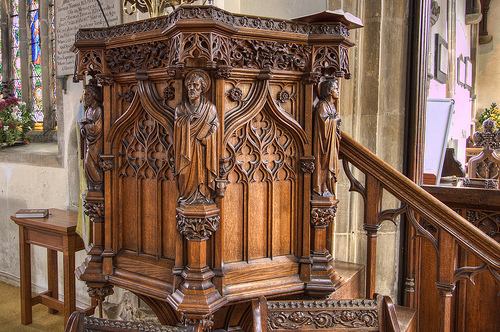 The church consists of a west tower, north and south aisles, nave, chancel and vestry. There are some new church rooms to the north which have a nice aspect. The church dates from the 13th century but has seen many changes over the years. There are two porches both 14th century which traditionally catered for Harcourt (north) and Beauchamp (south). The wooden rood screen, carved pulpit and choir stalls date to the 19th century, the original pews have mostly been removed with modern flexible seating installed.
The font is probably 13th century and was removed from the church in the 1650’s by the Puritan Roundhead minister Captain John Yaxley (read more on him in link). It was used as a horse trough for many years until it was reinstated in 1864. The plain 17th century font was given to a church in Zanzibar – would be interested in knowing if its still there?? 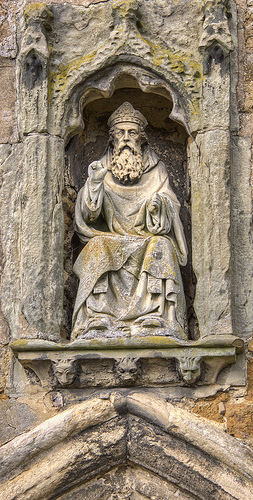 St Wilfrid above the south porch

The ashlar tower was rebuilt in 1832-36 after the original tower and steeple collapsed. The dedication of the church is to St Wilfrid (634-709) who is remembered as the leading bishop who persuaded the Great Synod of Whitby to forge greater links with Rome and the papal authority from the late 7th century rather than continue the Celtic tradition of Christianity. His feast of title is 12th October. There is a stone statue of St. Wilfrid over the south porch door together with a stained glass window alongside one of the founder of Merton College, Oxford – Walter de Merton (Bishop of Rochester and Chancellor of England) on the west side of the tower and visible from the bell-ringers chamber. The Warden and Fellows of Merton College bought the advowson of St Wilfrid’s in 1771.

I can see that St Wilfrid’s is a ‘busy’ church which is always pleasing to see. The church has some nice features and if you are ever passing it is worth a visit inside.The church is open everyday during daylight hours (how pleasing to see this) but often things are going on at the church.