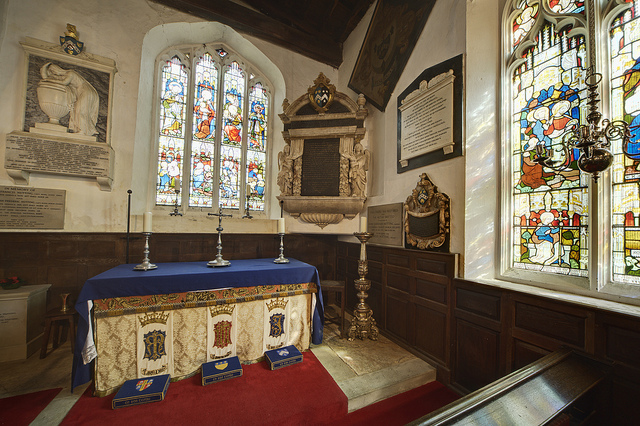 This small village is approximately ten miles north-east of Leicester near to Beeby and Keyham and has a population of a few hundred. I visited the church during the annual Ride & Stride event in 2010. The history of the village is tied in with nearby Quenby Hall. Between 1764 and 1776 Shuckbrugh Ashby of the hall built a model village in Hungarton with many brick built dwellings, they all have a yellow and red brick pattern and date stones so you should be able to find them. 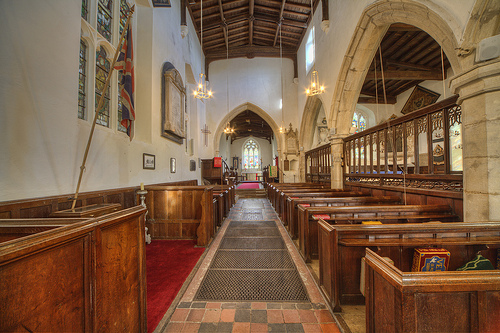 There are some earlier buildings and many later ones now but it has a pleasant look and they have a pub and a village hall. The church sits high on a hill overlooking the surrounding countryside and can be seen for many miles. 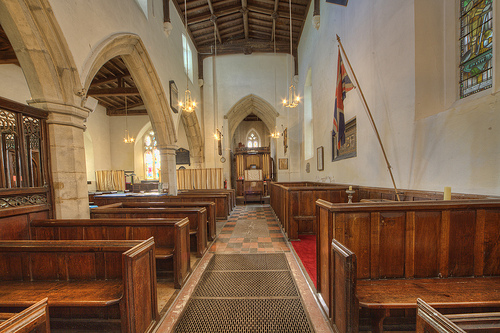 Looking towards west tower and arcade to south aisle on left.

Leicester Abbey held the church at Hungarton before 1162 probably given as a gift or from a donor. The church consists of a west tower with crocketted recessed spire, nave, chancel and south aisle leading to the Quenby Chapel. The church mostly dates from the ‘decorated period’ (1250-1350) but the clerestory is later and dates to the 15th century when these really came into fashion and were added to so many churches. The Norman font with its square design and lozenge carving looks like a cut-down version and the corners have been taken off for some obscure reason. 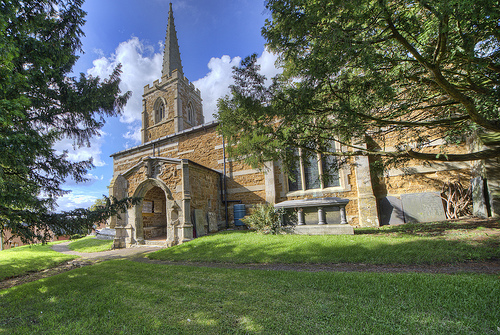 View of south porch and tower with recessed spire.

The pews have some set aside for the notably families, the Quenby chapel is a very nice feature with some good monuments to the past owners of Quenby Hall including Shuckbrugh Ashby (what a most unusual first name). This monument by Thomas Banks has mourning women bending over an urn, a nice piece and worthy of a visit. On the north wall of the nave are some 18th century painted heraldic motifs to the Quenby Hall residents, on them are an image of a ‘black boy’, I was told by the ladies there that he was a favourite of one of the owners of the Hall in the 18th century, but I cannot remember the exact story but if anyone can shed any light on this information I would be happy to add this to the entry. 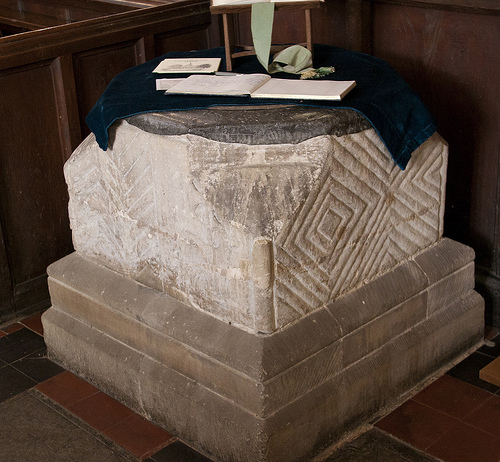 Norman font with the corners taken off for some unknown reason

I am not sure on the opening times of the church – I have an inkling it is usually locked but I will find out as it is a delightful church perched on a hill with pretty views of the countryside around and it has many items of interest.

Update – Thanks to John Murray I now have some more information. The ‘Black Boy’ was in reference to the Black Boy Hotel (now Inn) that the Burnaby’s of Baggrave Hall owned in the 18th century. The Burnaby’s continued to live at Baggrave Hall until 1939 when it was sold.
The unusual name of ‘Shuckbrugh’ was in reference to his mothers maiden name. His mother resided at Shuckbrugh Hall in Northamptonshire, and the Shruckbrugh family still reside there to this day.

The church at Hungarton is usually LOCKED. More information here.