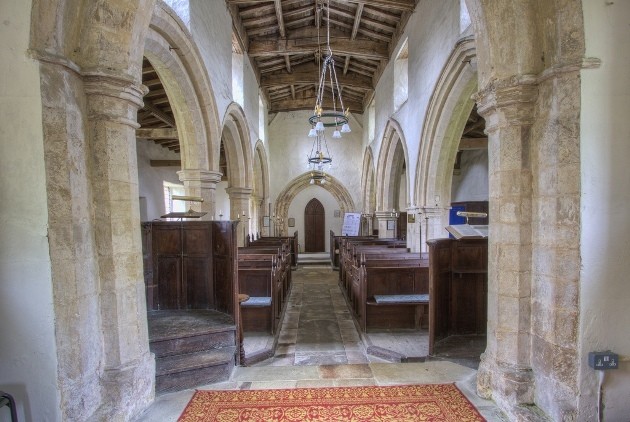 This village is 15 miles south-east of Leicester and some five miles north of Market Harborough. It was mentioned in the Domesday book and a link to the British History site is below where you can read more on the early years of this community.
The village today is very pretty, in fact it is too pretty and looks ‘false’ in an odd type of way. This is probably because in the early part of the 20th century almost all the village was rebuilt by the Hardcastles of Blaston Hall. All the houses in the village are the result of complete or partial rebuilding by the Hardcastles. The brick cottages are the work of Thomas Hardcastle (d. 1902) in 1882-3, but most of the rebuilding was carried out by his son T. A. Hardcastle between 1905 and 1911. He set out to create a model ‘garden’ village, planted with a great variety of trees and ornamental shrubs. 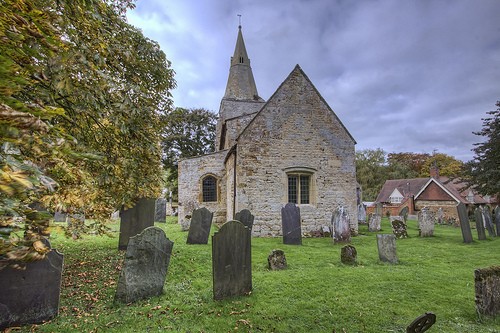 The cottages are built of local ironstone, are planned on generous lines, and stand in large gardens. Where original early-17th-century features existed, Hardcastle was careful to retain them, and all later work was altered to conform with this style. An exception is Orchard House, which is of red brick and has a symmetrical ‘Queen Anne’ frontage dated 1913. The Tudor House is of 17th-century origin, retaining four-centred stone door-heads. It was largely rebuilt in 1905 as the Horninghold Estate Office. A pair of stone cottages at the north end of the village carries a tablet of 1911, stating that the Globe Inn formerly stood on the site. The tradition of well-kept gardens, hedges, and grass verges is still maintained in the village and it is worth a walk around the village to view the buildings. I did have the feeling that this is a rather a select retreat and although the village is overbearingly pretty it lacks something I cannot quite put my finger on, very odd. 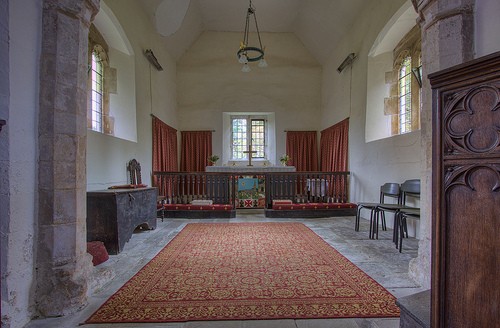 The chancel area with its later added windows

Anyway back to St Peters which stands to the southwest of the village and is built of ironstone and limestone. The church consists of a chancel, nave, north and south aisles (3 bays), tower with spire and north & south porches. If you walk around the church the most interesting feature is the southern 12th century doorway. The base of the tower and some portions of the nave wall are also Norman, the south aisle was added in the 13th century, and later in the 13th the north aisle was added. The builders thankfully kept the southern doorway when building the southern aisle and repositioned the doorway which originally would have led straight into the nave. The voussoirs of its semi-circular arch have three tiers of chip-carved ornament below a billet hoodmould. The chamfers of the imposts are finely carved with honeysuckle and other ornament and include symbolic beasts on the two reveals. 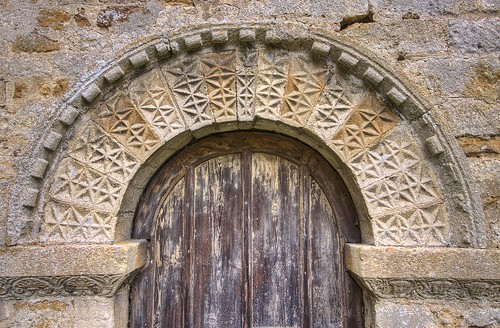 The tower dates from the 13th century as does the small broached spire, the buttresses were added in the 14th century to the tower. The clerestory was added in the 15th century and the roofs of both the nave and aisles raised. In 1794 cracks were reported in the tower walls, and underpinning was necessary for repairs. Various repairs were carried out in 1829 and 1836, new internal fittings were installed between 1833-1844. The north porch was rebuilt in 1904-06 and new three-light windows installed in the chancel. By 1934 the church was in a poor condition and repairs were carried out in 1936. In 1951 a 13th century coffin lid was unearthed of Clipsham stone and this is now in the nave by the west tower it is thought to be a Knights Templar. The plain octagonal font is 13th century and stands on circular supports. 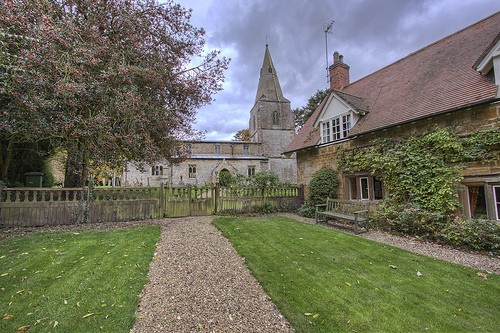 The path via the pretty cottages to the church

The church is pleasant and still used as a place of worship but also as the village hall. The church needs repairs and they are trying to raise £100,000 to repair the building. Access is fine, there are no facilities in the village (nearest Hallaton) and the church is usually open.