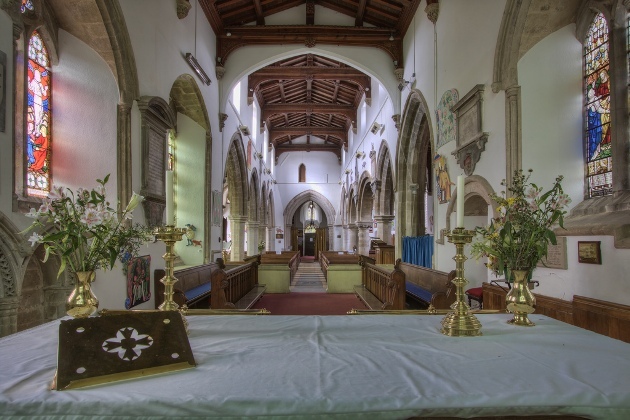 View from Chancel at Hallaton Church

Hallaton a village nearly 16 miles south-east of Leicester has a population of around 550. It has a famous annual bottle kicking event that may be of pagan origin and more can be read at the link on Wikipedia. There have been Roman remains found around the village and there may have been a motte and bailey castle at the village on nearby Castle Hill. In 2000 a hoard of more than 5000 silver and gold coins were found which dated to the late Iron Age. 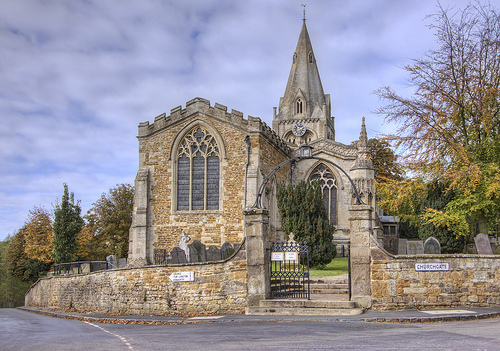 East window of this pretty church

The village was in the Domesday Book as ‘Alctone’ when there were 24 taxable villagers. Early in the 12th century the right of advowson was presented to Leeds Priory for half of the rectory and the other by half by a lord of the local manor. In fact up until 1728 the parish had two rectors and two lords of the manor. These families were Bardolf and Engaine. The manors and titles changed many times and if you are interested in delving further into the families and history of the village I provide a link to the British History site. Hallaton was probably the centre of economic life in the 13th & 14th centuries in this area of the county but its importance gradually declined. 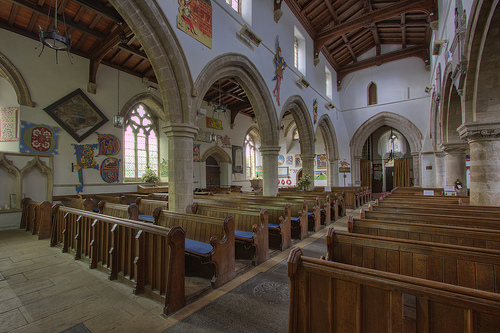 Picture taken across the nave to south aisle. The church was having a display of art

The church consists of a west tower and broached spire, north and south porch, nave, north aisle, south aisle, chancel, vestry (now toilet & kitchen) and crypt. Built of ironstone and limestone parts of the church date back to the Norman period with later additions. The north porch was added in the 15th century which contains some original timbers. Inside is an early Norman tympanum showing St Michael slaying a dragon. There was a Norman church here before and the roofline of the earlier church can be seen in the 13th century wall of the north aisle at the west end. The tower dates from the 13th century and most of the other fabric dates from the 14th-15th centuries. At the east end of the north aisle on the external wall is a magnificent Decorated Gothic turret with shields of the Bardolf and Engaine families who were Lords of the manors. It may have enclosed a staircase leading to a rood loft, and old records mention a second turret but its whereabouts are unknown. 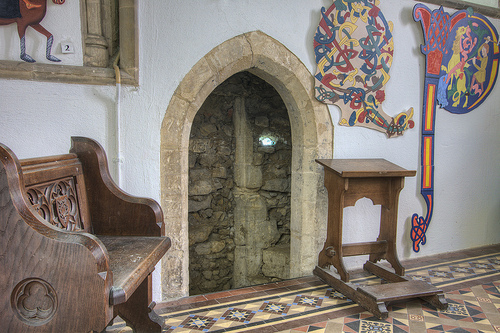 At the east end of the chancel under the window are signs of a blocked doorway, on the inside lies a set of steps leading downward and a glass bottle placed in the wall. There may have been an entrance into the chancel through a door at the east end which would have been most unusual, but Hallaton was unusual in having two rectors from the Norman period right up until 1728. There is a crypt with 15th century rib vaulting at the east end of the north aisle which was used in the past as a ossuary (site made to serve as the final resting place of human skeletal remains). This is now used as the boiler room. 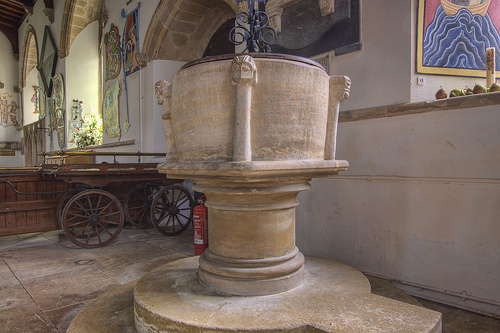 On entering the church from the north porch there are three late Norman arches supporting the aisle, the south aisle arches date from the 14th century and the clerestory dates from the 15th century. The original chancel floor was lower than today, there are sedilia (now too low with the raised floor) and a piscina in the south wall. The earlier nave roof line can be seen on the east wall od the tower as you look down the nave from the chancel. The font is Norman with four carved heads, two human and two demons. At the west end of the north aisle is a Saxon grave marker, the oldest object in the church. 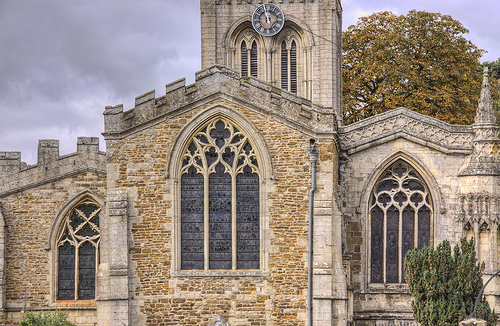 The church has plenty of gargoyles and carved heads (around 75 in all) scattered around the building. The vestry now houses a modern kitchen and toilet facilities this part of the church was added in 1923. The church tower has six bells and the church clock was replaced in 1904 with a rare type of escapement designed for Big Ben by Lord Grimthorpe in 1852. The musical box from the old clock in 1779 plays “Old Dunsmore” and still plays to the village every three hours.

In his book, Pevsner described the church as ‘one of the most imposing of Leicestershire village churches’, and the village as ‘one of the most enjoyable villages in the county’. I have to agree, the village is a delight and makes for a lovely walk around the streets and lanes. The church itself in its prominent position is a fine building and has much to examine on the inside and outside. The church is open every day, but access can be tricky with the steps down into the church. There are a couple of pubs within the village to visit for refreshments.

Revd Nicky Morgan 2010
Just to say thank you for taking these photos and making them available for all to see on the website – a number of people have commented on them to me – and as priest of the parishes of the Hallaton benefice I have just got round to having a look and am delighted that you have done this. Thank you

The church at Hallaton is usually OPEN. More information here.