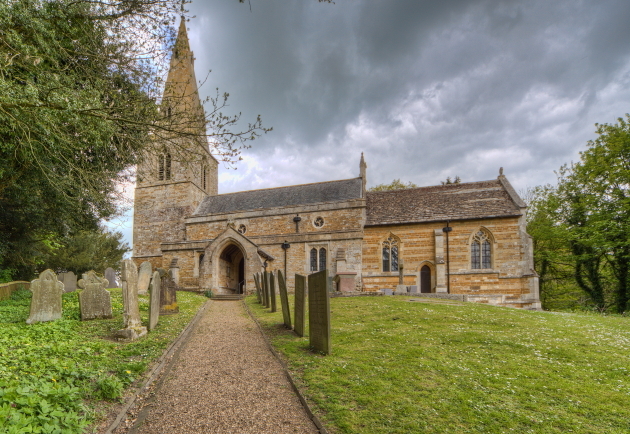 Gumley is eleven miles south-east of Leicester and is sited on the ridge of high ground with its near neighbours Mowsley and Laughton. Foxton village and the locks are also nearby.

In 1086 the recorded population was 20, by 1821 this had risen to 289 before a gradual fall to just over a 100 today. The village is mentioned even earlier in 749 when King Aethelbald of Mercia held a synod at Gumley under the instigation of Pope Boniface. Gumley must have been held in some importance as King Offa also visited Gumley in 772 & 779. 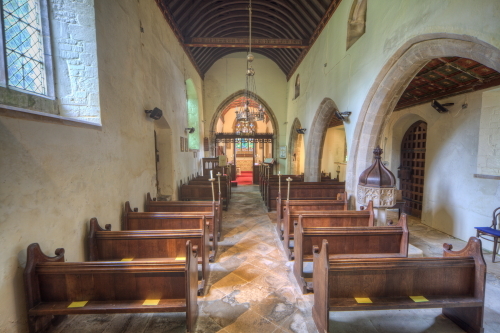 Nave view to chancel, the furniture as well as the font are 19th century

The village was originally sited around the church which now stands apart from the later buildings which now are to the south of the church along the road to Foxton. The building of Gumley Hall (built 1764) probably resulted in some of the buildings around the church at that time being removed. Gumley Hall employed many people during its heyday but was demolished in 1962. The Hall used to stand to the east of the church with a lake behind which is still there but private property. There was no electricity until 1931, but the owners of Gumley Hall made good this deficiency by generating their own supplies. In the small factory-like building with a large chimney-stack south of the church Capt. Whitmore in the late 19th century produced gas, and Mr. Murray Smith in the early 20th century converted the installation to produce electricity. 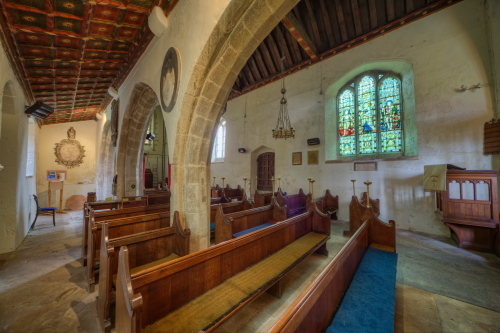 View of the narrow south aisle and through the arch the nave and north wall.

The Hall was originally built by the son of Joseph Cradock a Leicester hosier and draper who acquired the manor and lands from the Horton family in the 18th century, Joseph Cradock the son became a well known antiquary and patron of the arts. Cradock laid out the gardens and plantations of Gumley Hall in imitation of the Parc de St. Cloud, and in the summer months they became a fashionable resort for the gentry of Leicester, particularly those who came to take the mineral waters of its ‘spa’, a chalybeate spring found in 1789. Cradock moved in the literary society of Goldsmith, Johnson, and Burke, and built a theatre at Gumley which was used for amateur productions and by Garrick. Cradock spent too much money on the building and had to sell up and it changed hands many times. During WWII the Hall was used to train foreign agents who were sent to German occupied territory. After the war the Hall was turned into flats but deteriorated rapidly. The villagers were invited to the final ball at the Hall before it was sadly finally demolished in 1962. The Fernie Hunt also used the Hall for their meets from the 1920’s. As the Hall was just yards from St Helen’s it must have been used by future spies, medieval villagers and the famous visitors to the Hall to meet the Cradocks. Queen Victoria also visited the Hall and I expect the church. 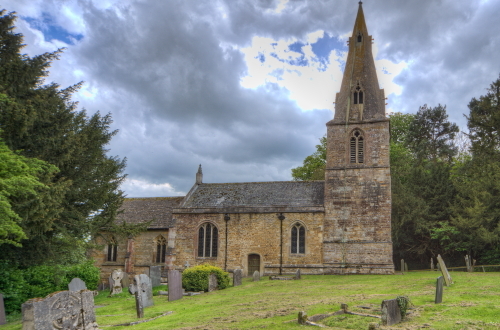 View of exterior from North

The pretty little church of St Helens is sited on the side of a hill and consists of a west tower & spire, nave, chancel, south aisle and porch. Like Foxton nearby it was given to Daventry Priory by Robert son of Vitalis, after 1266 this passed to the Dean and Chapter of Lincoln. The building is largely of the 14th century although there would have been an earlier structure on the site. The south aisle is very narrow whilst the arcade of three bays leads through to the small nave. 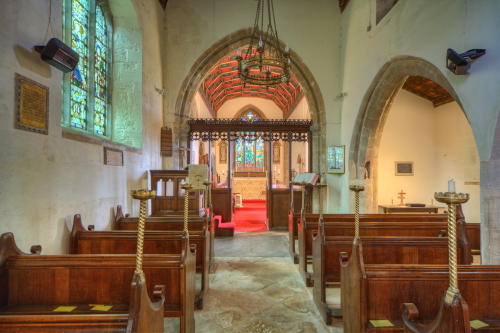 View to chancel and the brightly painted wooden roof

The tower dates from the late 14th century and has a broached spire and crocketted heads. The north wall and windows date from the 16th century when some rebuilding took place. Until the 19th century there was also a north porch. The church underwent restoration work in the 19th century, the clerestory windows in their circular form date from this period. Also the roof was redone and the chancel rebuilt in the restoration. Most if not all of the furniture is Victorian. There are a couple of nice wall plaques and monuments and the font dates to the 19th century.

I know I have perhaps dwelt too long on Gumley Hall, but when I visited I was inquisitive about the nearby buildings and the ’empty area’ to the east of the church. St Helen is sited in a very pretty location with woods on one side and is an attractive small church. It has no grand monuments and neither does it have any fine architectural detail. But I found the church to be a peaceful building with much character. It is usually unlocked and is well worth a visit. There is a pub in the village and plenty of good walks around the area.

John March adds – “The gas and the electricity mentioned, was produced in a building now a house called the Old Engine House, half way down the village next to the what was the school and is now the Village Hall.”

The church at Gumley is usually OPEN. More information here.