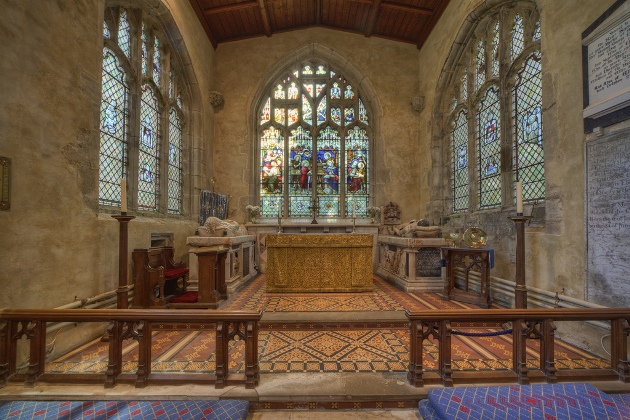 The village of Frolesworth is ten miles south-west of Leicester and four miles north of Lutterworth. It is sited on the high ground with Broughton Astley its nearest neighbour a few miles to the north. The church of St Nicholas sits on the highest point and the impressive tower with its large pinnacles can be seen for miles around. 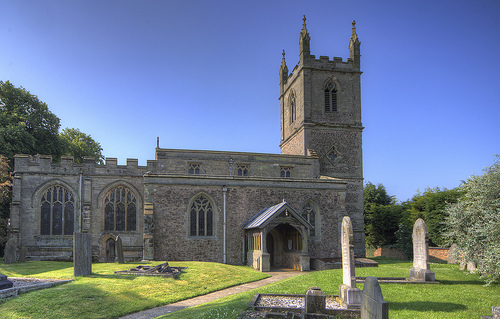 The church consists of a west tower, north & south aisles, chancel, nave, vestry and north porch. The earliest parts of the church date to the 13th century, but the tower was rebuilt in 1762 and a further Victorian restoration took place in 1887-8 by W. Bassett-Smith. The embattled parapet and angle pinnacles with fleurons add height and interest to the tower. The south aisle and chancel date from the 15th century as does the clerestory. The north aisle arcade dates to the 13th century whilst the south arcade dates to the 14th century. There is a doorway and remains of the rood staircase in the east end of the north aisle and the rood loft entrance can clearly be seen. 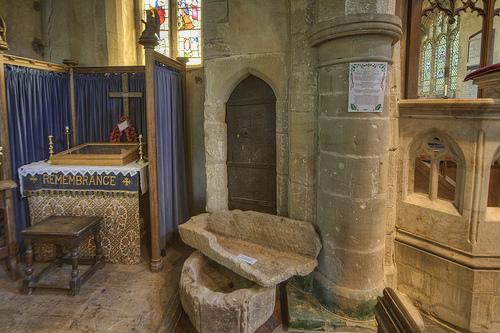 Entrance to rood staircase, the medieval font, and a broken stone coffin all early medieval

The original font now lies before the doorway whilst the present font is Victorian. The wooden screen was installed in 1927 leading to the chancel with its twin sets of perpendicular windows which are an attractive feature. The chancel arch is perhaps the oldest part of the present church dating from the early part of the 13th century and decorated with nail head in the capitals. There are small remains of 15th century glass in the chancel set into a later 19th century design. The stained glass in the east window was installed in 1898 and represents the childhood of Christ with various English saints. 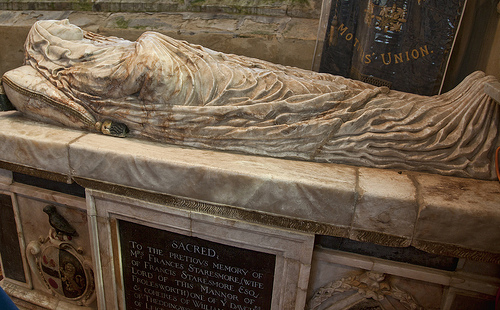 The alabaster tomb to Frances Staresmore who died in 1657

So far the description fits many of the churches in Leicestershire but Frolesworth has some very interesting alabaster tombs and memorials. One of the wall monuments is to John Smith who was born in Frolesworth in 1656 and became Lord Chief Baron of the Exchequer in Scotland. He founded the Frolesworth Hospital which still is still in use as an old people’s home in the village and the oldest part dates to 1725. It also has its own chapel and I am hoping to add it as an entry on the site. 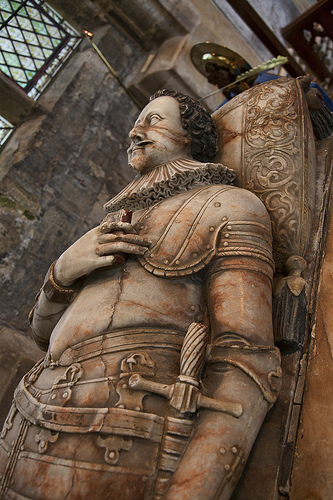 The fine alabaster tomb to Francis Staresmore with its decorated pillow and armour detail.

The two alabaster tombs are sited either side of the altar. On the right is Francis Staresmore who died in 1626, the memorial was erected by his widow in 1631 and shows him in armour with his feet pointing towards the east against a shield of arms. On the side of the chest in high relief are the effigies of his 8 children, 3 girls and 5 boys. The other tomb showing a lady wrapped in a shroud with heraldic symbols is Frances Staresmore his wife who died later in 1657. Both tombs are of great interest and they are in good condition although some repairs are required to the armoured Francis. 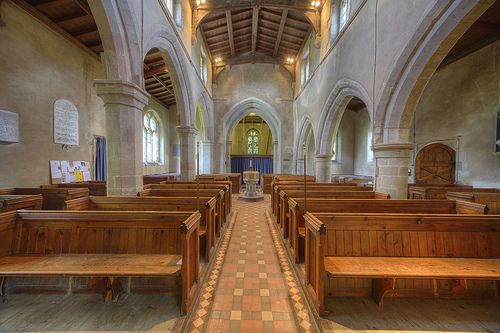 View to the west tower through the nave.

St Nicholas is a fine church with some interesting monuments, it also has great views from the south side of the church over the surrounding south Leicestershire countryside. There are no amenities in the village and unfortunately the church is usually locked outside of services. There is parking outside the church and the nearest place for facilities is in nearby Broughton Astley.