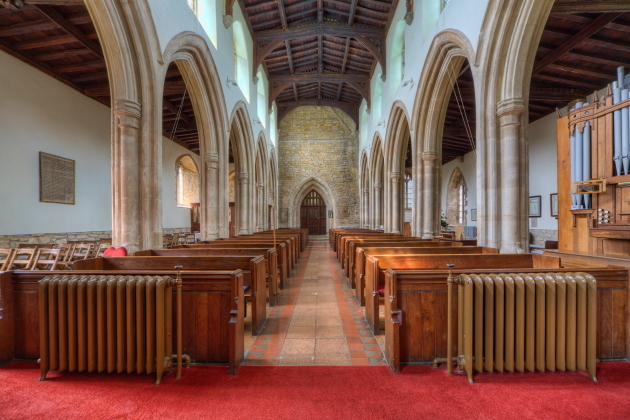 To the north-west of Market Harborough is the village of Foxton some 13 miles south-east of Leicester. The village is perhaps overshadowed by the nearby Foxton Locks, a set of ten locks set on the Grand Union canal which is a major attraction in the area . As a child it used to be an exciting trip out to see the boats passing through the locks, it still is and I often stop and take walk down if I am passing. 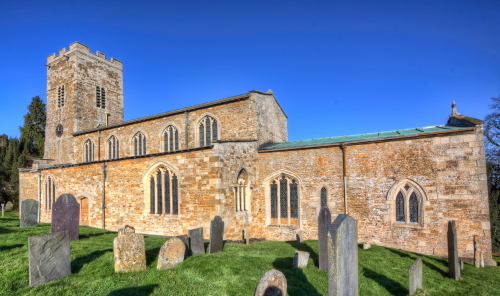 View from the south of this 13th century building.

Foxton the village itself is perhaps overlooked, but it also has the canal passing through the village from the locks and the church of St Andrews makes a pleasant detour from the sometimes busy locks – and there is also a pub nearby.
Foxton was mentioned in the Domesday Book in 1086 with a population of around thirty, today the population is around 300. The manors of Foxton were split into three parts and you can read more on the early history of the village at the link here. 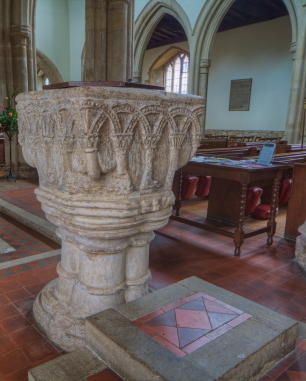 The Norman font which probably stood in an earlier church than the present 13th C one.

There was a priest at Foxton in 1086 and in 1109 Robert son of Vitalis gave Foxton church to Daventry Priory. In 1558 the advowson (the right to appoint a priest) was granted to the Bishop of Lincoln before passing to the Crown in the 17th century. In 1605 there were over 200 communicants at the church. In 1662 the parish had been deserted by its vicar who later became a non-conformist preacher. Later a John Ashton vicar from 1711-39 held services every Sunday and communion just three times a year. From 1739 to 1876 the village was without a vicar and the duties were performed by curates who also had to look after neighbouring parishes. 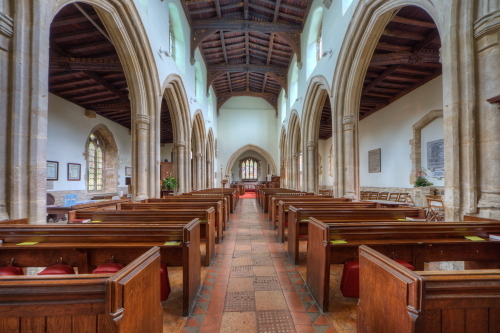 View to chancel from west tower, the five arcades are fine examples

The church of St Andrew sits on the high ground overlooking the village and canal, it consists of a west tower, north & south aisles, nave , chancel and north porch. The structure probably replaces an earlier building of which some items remain but the oldest fabric is in the west end of the chancel and the lower stage of the tower which date to the 13th century. The north porch and north aisle date from the 14th century and the clerestory, top of the tower and coeval arcades date from the 15th century, the tall elegant arches are similar to the ones at nearby Market Harborough. 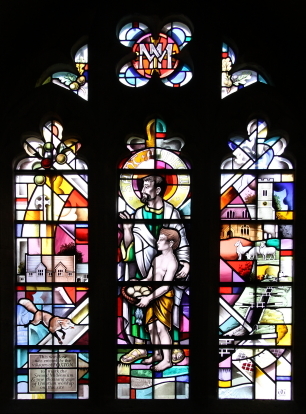 Stained glass window in south aisle added for the millennium

It was recorded in 1797 by the archdeacon that the church was very dirty, the seats ‘wretchedly bad, the roof leaky, the walls defective, and the interior in need of plastering. His comments must have caused some action because by 1806 the church was recorded as ‘in good condition’. In 1891-3 a thorough restoration took place at a cost of £2,750 by H. Hardwicke Langston of London (chancel) and the rest by William White. A plaque in the north aisle commemorates the event. The interior was refitted the, chancel reroofed and east window restored. The south porch was also demolished and the doorway blocked. 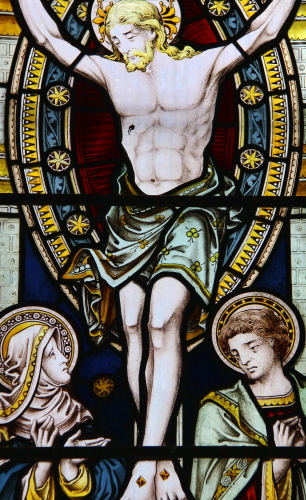 The font is Norman and dates to the mid 12th century, it is a fine item with its carved arcading and semi circular arches. It rests on a later pedestal not the original one. There is also the remains of a Saxon cross shaft carved with interlaced ornament in the church. Both of these items give good indication that a previous structure stood on the site. There is an attractive modern stained glass window in the south aisle to commemorate the millennium and there also some interesting Victorian boards.
Foxton has charm, although renovated by the Victorians there is still much of the original fabric on display and it has some fine arcades as well as a magnificent font and other items of interest. If you are visiting Foxton locks take my advice. Park your car by the church (its free) and walk to the locks (its not far) and on your return have a pint in the pub by the church (missing all the crowds at the Locks) and then take a stroll up to the church before your journey home, now how’s that for a nice trip out.