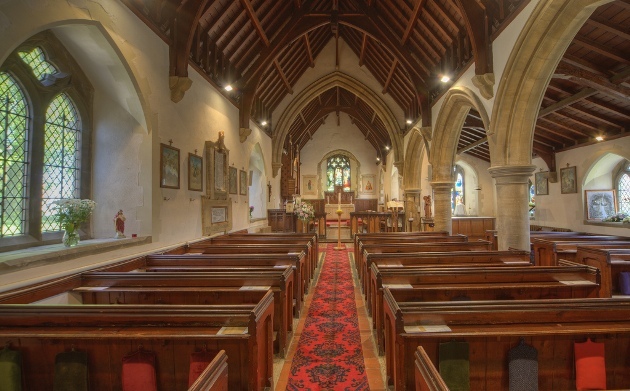 The large village of Fleckney about 8 miles south-east of Leicester and 7 miles north of Market Harborough has a population of around 4,700 according to the 2001 census. It has grown rapidly during the last century and although most of the village is modern there are structures dating to the 18th-19th centuries. Fleckney was in fact a far smaller village during most of its history. In the Domesday Book it is recorded that the population was only 3, but it did reach 1,800 by the 19th century when industry arrived at Fleckney with its brickworks and hosiery. 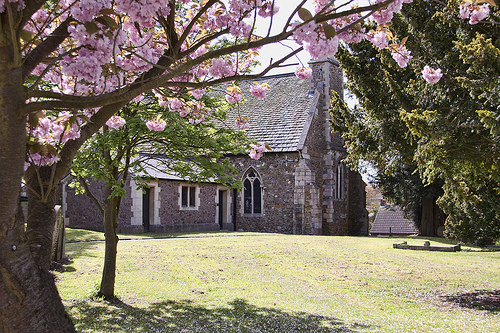 Spring blossom on the south lawns

The church at Fleckney was originally a chapelry of Wistow. Being such a small village it did not warrant its own priest so it was served from the ‘mother’ church at Wistow. By 1220 it did have its own resident chaplain and the church was extended at this time. In 1482 both churches were given to Sulby Abbey in Northamptonshire but after the dissolution of the abbeys by Henry VIII they reverted back to Wistow. It was not until 1864 that Fleckney became a separate vicarage in its own right. 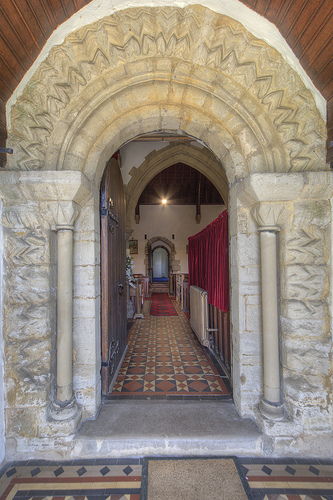 The fine Norman doorway moved and rebuilt during the Victorian building work.

The church at Fleckney consists of a nave, chancel, south aisle and porch, north choir vestry and bellcote. There are two Norman doorways north and south, the north now leads into the vestry and is rather worn. The southern Norman doorway was rebuilt by the Victorians and is a fine example with fine chevron and zig-zag ornament. These probably date to the 12th century when the church was first built probably with money from the Hastings family who held the manor at Wistow.
In the 13th-14th centuries the building was extensively renovated with the addition of the west window set deep into the thick wall. The east window also dates from this period although the stained glass is Victorian.
The next major changes were in 1868-70 when Charles Kirk of Sleaford completed the south aisle extension with its five arches. He also altered the chancel arch, renewed many windows, added an organ chamber and the south porch and also rebuilt the bellcote to take two bells. The choir vestry was added in 1954. 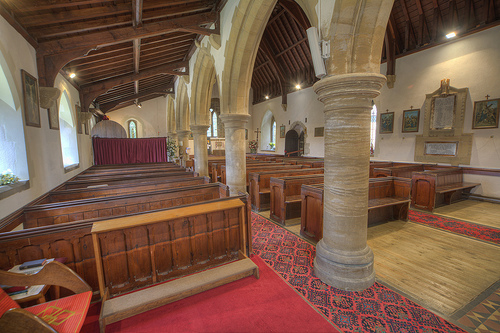 There are Victorian paintings around the church as ‘Stations of the Cross’ these were rescued from Aylestone Park church in Leicester when it was being demolished. The furniture (pews and pulpit) date to the Victorian restoration as does the organ.
I would like to add that the majority of the information came from the excellent guide book by Ian Matthewman.
Fleckney had an interesting industrial period and you can read more on this via the link above but one fact I will divulge is that in 1886 R. Rowley & Co built a factory in Fleckney on Saddington Road after moving from their Leicester site which as stormed by hand-loom weavers in the riots of 1885. As a protection from attack their new factory had no windows on the street frontage to protect their machines and workers. This feature earned the factory the local name of the ‘gaol’.
Furnivals (created 1890) the ‘soft drinks’ company was also based in Fleckney, I expect many Leicestershire people will remember their fizzy drinks from the 1960’s and onwards. There is some interesting information online here.
There are plenty of amenities in the village and there is parking outside of the church. However this church is unfortunately locked at the present time outside of normal services.