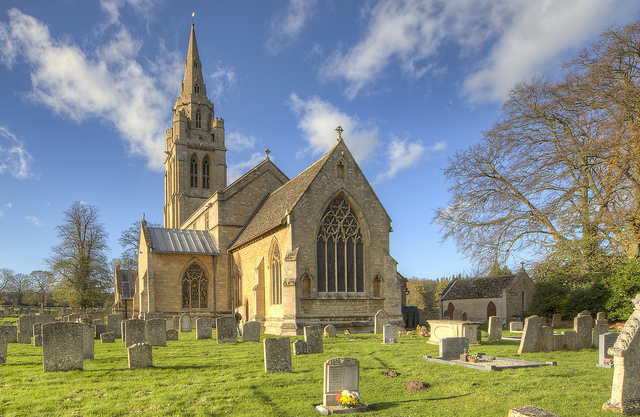 This fine church with its amazing array of monuments is another of the counties best. But first a potted history on the village and manors. The village lies a few miles east of Oakham and north of Rutland Water and according to the 2001 census the population was around 600. It is recorded in the Domesday book and was held by Judith a widow to Earl Waltheof in 1086. Maud their eldest daughter married a Norman, Simon de St. Liz who held the earldom of Huntingdon, when he died in 1111 she married David, King of Scotland. From that date it followed the descent of the Earldom and Honour of Huntingdon. You can read more on the manor and the different families by following the link at the end, but I am going to ‘jump’ to 1629 when Edward Noel, Lord Noel of Ridlington married into the manor of Exton. In 1682 another Edward Noel (grandson of the earlier) was created Earl Of Gainsborough and they have held the manor ever since and the descendants continue to live in the ‘new’ hall of Exton Park. 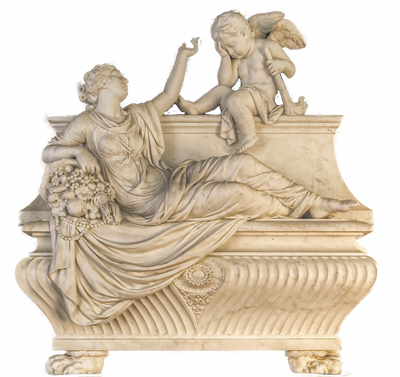 Memorial by Nollekins to 4th Earl of Gainsborough

The ruins of the old Tudor hall can be seen from the east end of the church. It was probably built by Sir James Harrington and dates to the early 17th century. Apparently it was a fine house but was unfortunately badly damaged by fire in 1810 and also again in 1915 and only the shell now survives. A ‘new’ hall was built to the north and was added to over the decades. There is a Roman Catholic chapel attached to the hall so hopefully when I have completed all the parish churches I can return and complete the chapel. 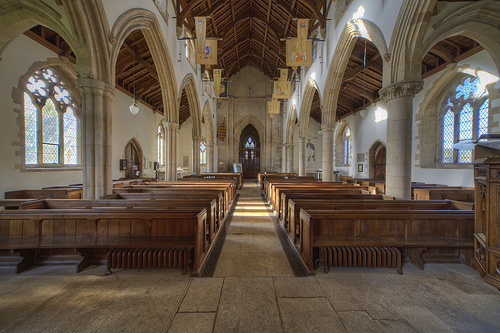 Now back to the church. It is set in a quiet location away from the village and I wonder whether the medieval village was situated around the church and it migrated east for reasons unknown, I could speculate but space is short on this entry. Whatever the reason the church now sits by itself in a beautiful spot and and it can be appreciated all the more. The first recorded mention of a vicar at Exton was in 1225 and the earliest parts of the church may date to that period but most of the fabric dates to the 14th century. The church consists of a west tower with short spire and two tiers of lucarnes, nave, south porch, north and south aisles, north and south transepts, chancel with organ chamber and vestry. 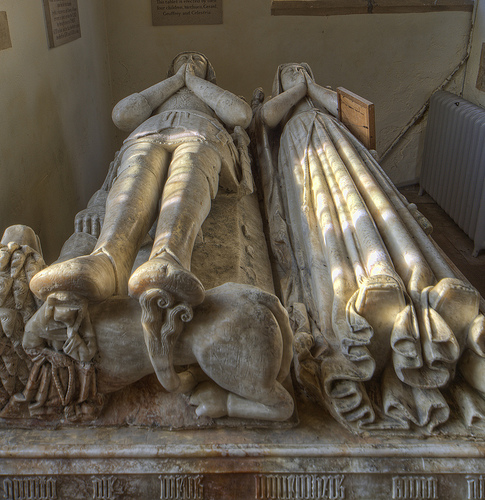 On the 25th April 1843 the spire was struck by lightning and masonry fell through the nave roof and caused much damage. The architect R. C. Carpenter, and then J. L. Pearson in 1851 restored much of the church using original fabric but often not in its original place. The font has eight shafts, ogee arches and dates from the 14th century. In the nave we have 21 banners showing heraldic devices and coats of arms of the Noel family which would have been used in funeral processions and then presented to the church. Some of them are replicas as the originals were disintegrating.
Now I come onto the monuments and sculptures in the church which I will concentrate on with the remaining room for the entry. Ranging from the 16th-18th centuries the monuments to the Noels and the Earls of Gainsborough are some of the finest in England with work by Joseph Nollekens and Grinling Gibbons. These are shortened entries, you can find more information in the excellent booklet on sale at the church, and there is also a link above to more information on the church. 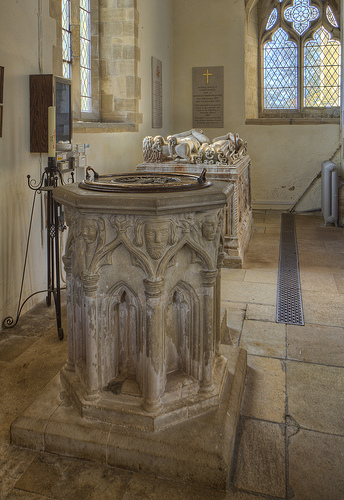 I will complete this as a ‘walk around’. As you enter the church and turn left into the south aisle, behind the font you will see the alabaster tomb to John Harington (d.1592) and his wife Alice with prone effigies with some fine carving on the tomb. Now into the north aisle against the east wall we have a monument to Lieutenant-General Bennett Noel who died in 1771, the first of two monuments in the church by Joseph Nollekens who was one of the founding members of the Royal Academy created in 1768. Considered to be one of the best English sculptors in the 18th century he made a fortune from his work and when he died in 1823 he left the then considerable sum of £200,000. The black and white marble chest monument in front of the ‘Nollekens’ was erected for Anne, wife of Lord Bruce of Kinloss who died in 1627. 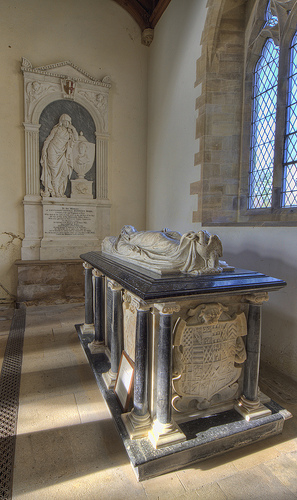 Walking down the north aisle to the north trancept and facing you we have one of the finest monuments in the church by Grinling Gibbons to Viscount Campden, his four wives and nineteen children. It really is an impressive piece, nearly as impressive as having nineteen children and four wives!
Grinling Gibbons is most famous for his fine wood carving and he worked on St Paul’s Cathedral and the Royal Palaces, the monument cost £1000, a considerable amount in 1683. 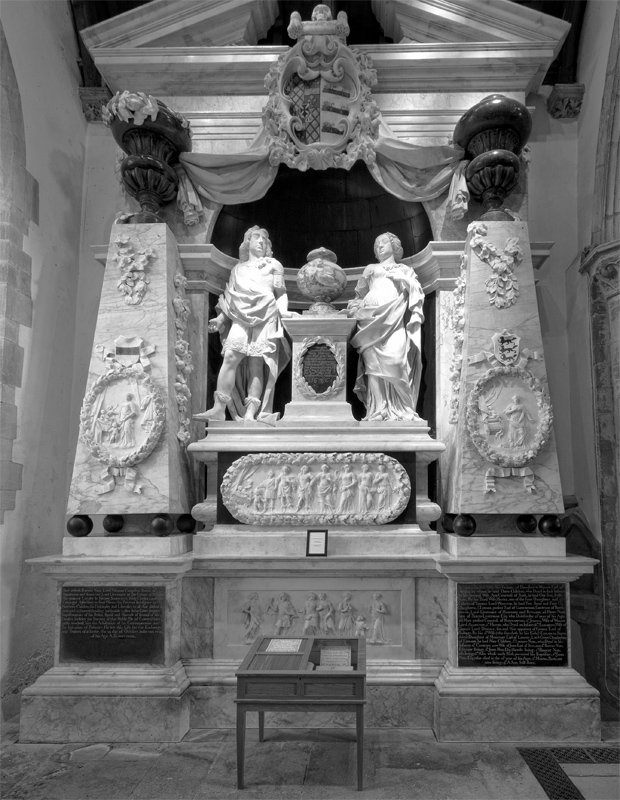 Opposite the grand masterpiece on the west wall of the trancept we have one of the nineteen offspring, a memorial to James Noel who died aged 18 in Roman dress and wig. Now enter the chancel and the north wall we have James Harington (d. 1592) and his wife Lucy in prayer. They had 18 children and lived to be over 70. On the south side of the chancel we have the second Nollekins monument to the 4th Earl of Gainsborough who died in 1751 and his wife Elizabeth. She was an Exton girl by all accounts and known as the ‘The Cottage Countess’, she survived her husband and married his cousin Thomas Noel and all three are depicted on the monument. 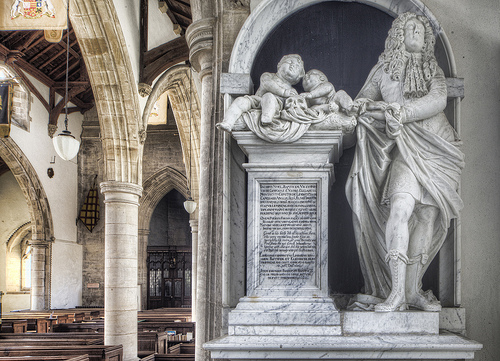 Finally head to the south trancept and admire the grand memorial to John Harington who was created Baron Harington of Exton in 1603 by James I.
The church is a must for anyone interested in fantastic sculpture and monuments, they are also set in a delightful church in a very pretty location. There is limited parking via a short private road to the church and access is good. There is the Fox and Hounds in the village opposite the green which has facilities, we ate there, and had a good meal. There are also some other churches nearby and you are really spoilt for choice on which to go and see. I would suggest Empingham and Tickencote which are nearby.
One of the highlights of the two counties and deserving of a trip out to admire this lovely church and its fine set of monuments, nothing more to add – except its open every day.

Leave a Reply to C B Newham Cancel reply