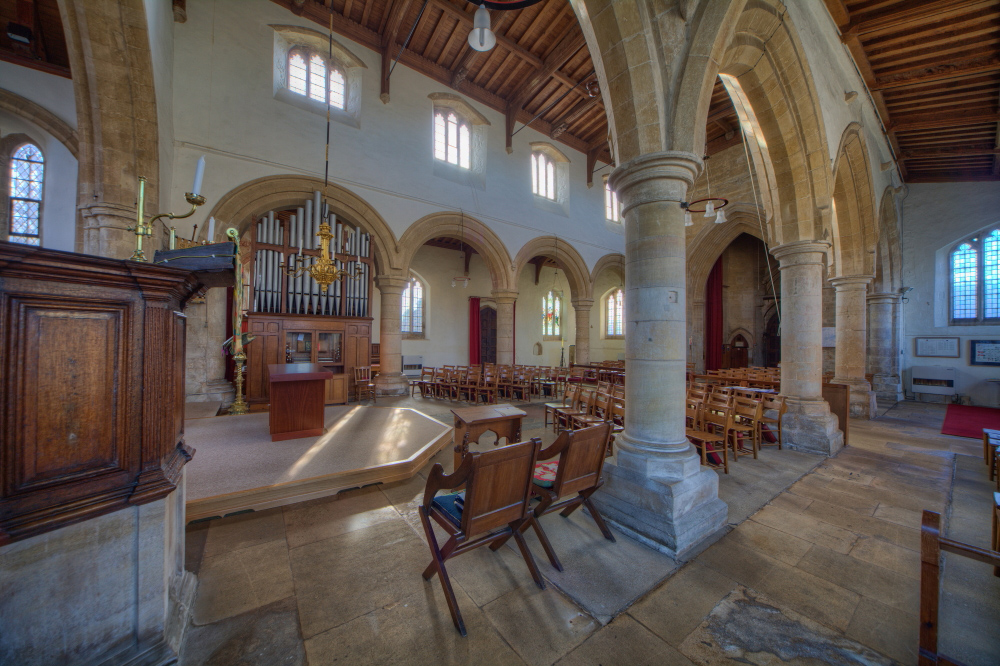 With a population of over 800 this village lies to the east of Rutland Water along the A606. On 12th March 1470 during the War of the Roses the Battle of Losecoat field took place near the village where the Yorkists under King Edward IV defeated the Lancastrians under Robert Welles, 8th Baron Willoughby de Eresby. It is reported that Lord Willoughby who was being held hostage by the King was beheaded before the battle in front of his son’s own army. Not a great start and Edwards men routed the Lancastrians from the field. 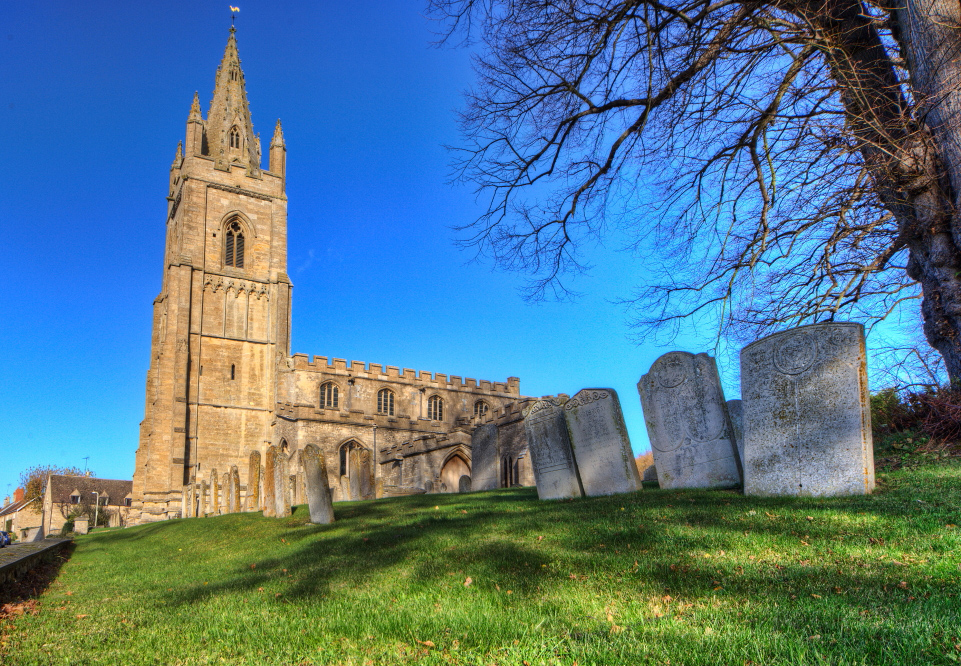 Empingham church has an elegant tower and recessed spire.

Gilbert de Gand held a manor at the village during the Domesday survey. This passed to Roger Mowbray early in the 13th century but the manors passed through many families and the Crown. Gilbert Heathcote who has a memorial in Edith Weston church held the manor from 1729. Apart from being Lord Mayor of London, he was a founder of the Bank of England and served as a Director for the East India Company. He rebuilt the manor house at Normanton and was buried at the church only eight days after he had been made a baronet. Normanton was submerged by Rutland Water and Normanton church ‘raised’ to the lake side. His memorial was moved to the church at Edith Weston. On his death he was reputed to the richest commoner in England with around £700,000. You can read more on the various families and manors by following the link to the British History site here. 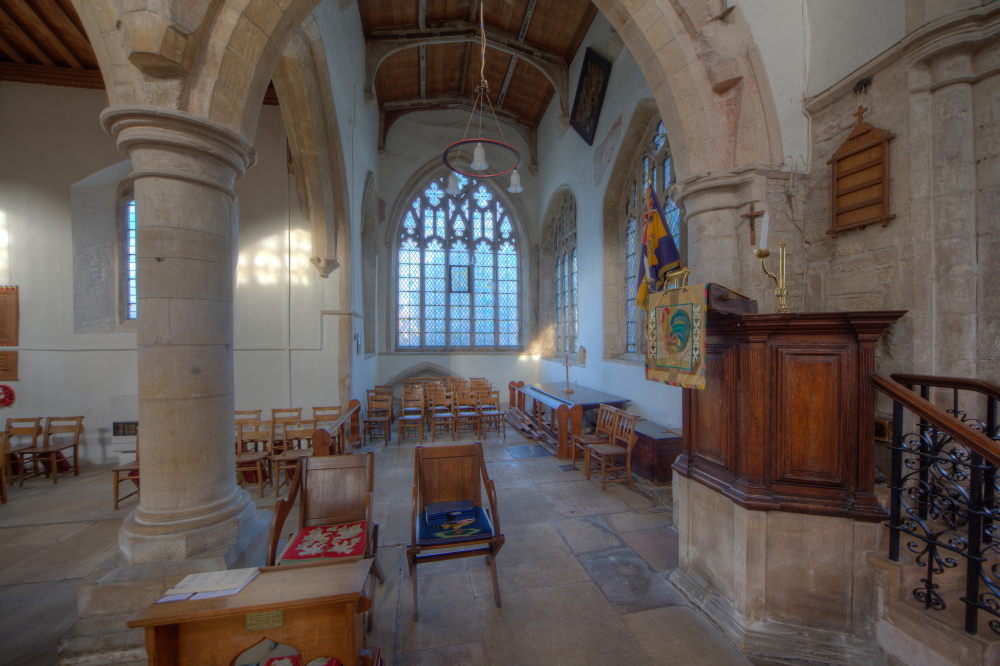 North transept with the fine windows, church has no pews but ‘flexible’ seating

So now let us now concentrate on the church itself. The church at Empingham was a Peculiar of Lincoln Cathedral and the title of a Prebend there. When attending services at Lincoln Cathedral they were given ‘prebendal’ seats usually at the back of the choir stalls. Because of its importance this church it is a large structure with impressive architecture and features. 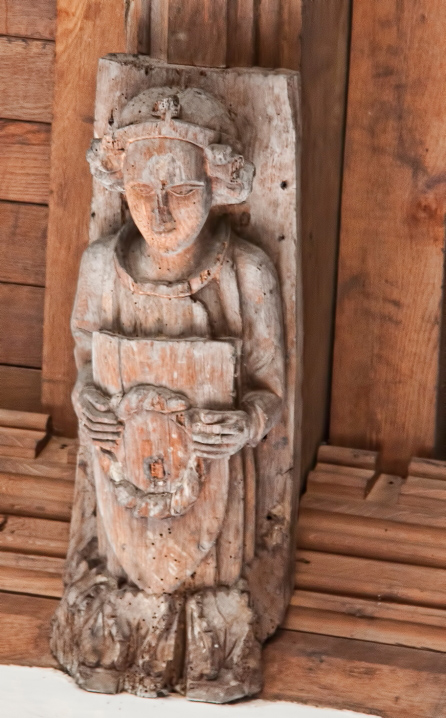 St Peter’s consists of a tall west tower with small crocketed spire, nave, south and north aisles, transepts to north and south, chancel, vestry and lastly a south porch.
Entry is via the 14th century west tower and the fine doorway with ogee top and ballflower decoration. The large tower also has a set of pinnacles and battlements. Much of the rest of the church dates to the 13th century; this includes the transepts, chancel and the windows therein. The north transept may have been remodelled in the 15th century. Both the arcades and aisles date to the 13th century, the clerestory dates to the 15th century as does the roof and the pretty carved wooden angels in the nave. There is some surviving medieval painting in the south aisle and more in the south transept, although it is difficult to gain entry as the south transept is being used for storage. Over the south doorway in red there are some five-petalled flowers and tendrils. 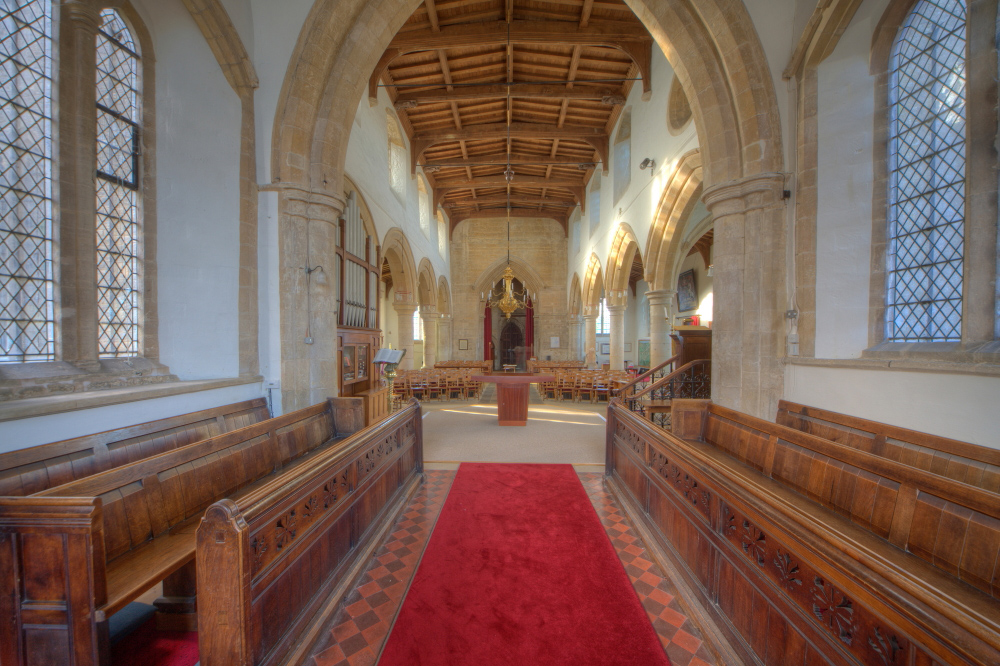 View from chancel area through to nave and west tower arch

In the chancel we have a fine triple set of sedilia and piscina and there is also another piscina in each of the transepts which would have had their own altars and chapels. There are a number of memorials and a couple of 13th century slabs. But if monuments or grand memorials are your interest the fantastic church at Exton should be visited either before or after this one as it is the next nearest village. 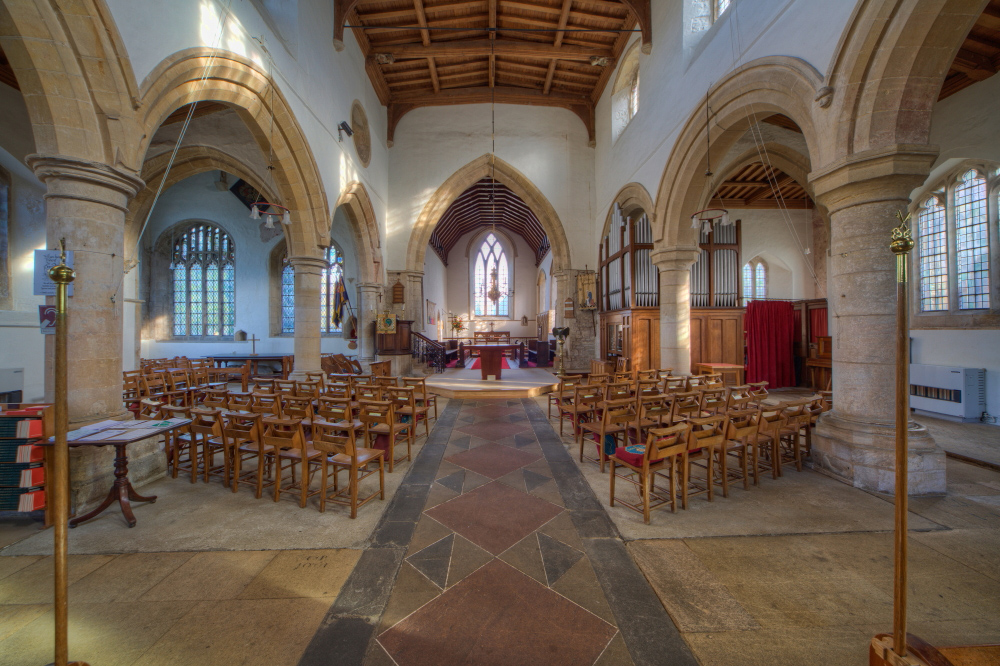 The nave and aisles at Empingham

The village has diminished in size over the years, in the early medieval period the village had fairs and markets and there was a chapel of St Botolph to the east which has long since disappeared. It is a pretty village with stone cottages and east of the church is the Prebendal House with a frontage of around 1700. There are also the remains of the nearby village of Hardwick just north of the Great North Road north-east from the village – I will be adding a section on deserted villages soon so look out for more information.

Empingham is an impressive building for such a small village, the large windows add much light and the openness of the nave, aisles and transepts adds a feeling of space to the building. At the time of the visit I was not entirely convinced by the building and felt something was lacking, something I could not quite put my finger on. Looking back it was probably because this was the sixth church I had visited that day, and it had been a long day with Exton and Tickencote completed earlier. Now I can appreciate it more and it is worth a visit, there is parking by the church and it is usually open. With the nearby churches at Tickencote and Exton you would have an excellent day out.

Janice Morris has kindly let us use one of her images of the medieval painting on this page.