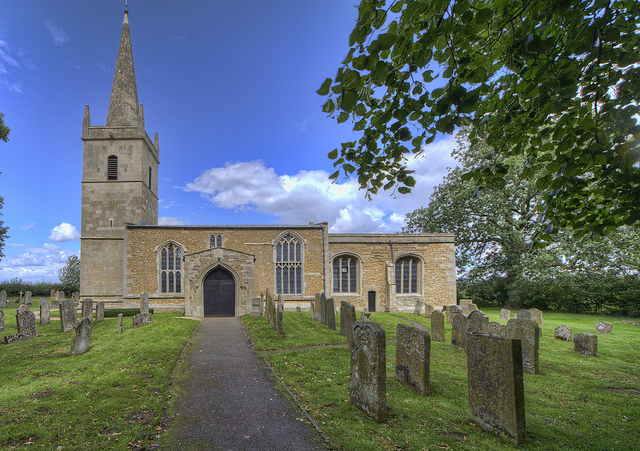 Just over a mile south-east from Oakham is the pretty little village of Egleton which had a population of only 79 in the 2001 census. The village is very near to Rutland Water and the Anglian Water Bird Watching Centre is accessed via the village. During the Domesday Survey the village is not mentioned but was one of the five ‘berewicks’ of the King’s manor of Oakham. These were outlying settlements attached to Oakham. The lords of Oakham Castle held the ‘hamlet’ but it is doubtful it had a ‘manor’ of its own until 1484 when the manor was granted to Henry Grey, Lord of Codnor. The manor seems to have been mostly held by the Crown until Queen Elizabeth sold it in 1600 to Sir John Spencer. The Duke of Buckingham came into possession of the manor but it was seized by Oliver Cromwell during the Commonwealth in 1652. After the Restoration the manor was returned to the Duke of Buckingham. You can read more by following the link here. 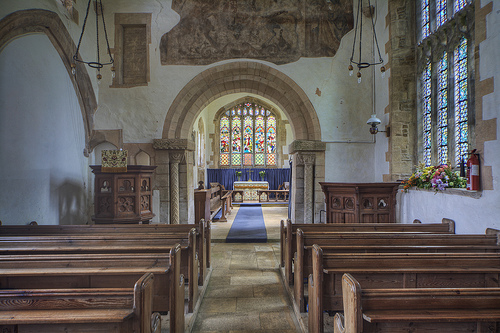 Chancel arch showing the Norman carved shafts, above the arch some Georgian painting

Egleton probably had a small chapel and the ‘mother’ church at Oakham provided a priest for services. It is reported that in 1547 the vicar of Oakham only had one curate to assist him plus some chantry priests. By the 17th century the chapel at Egleton had its own curate and the village petitioned the Council of State for their own vicarage and vicar. This never came about and village continued to be supported by the main church at Oakham with it seems various periods of poor service. 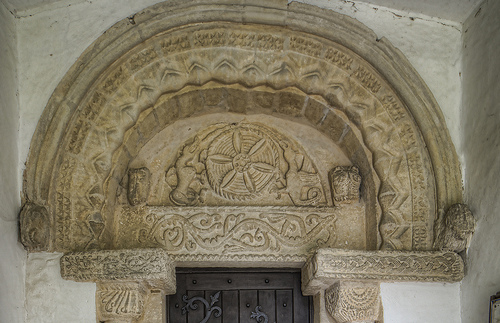 The fantastic Norman entrance with the finely carved Tympanum

Egleton suffered from the general neglect of the chapelries of Oakham during the time of Thomas Thickpenny, vicar of Oakham (1565 to 1596). Francis Pratt was presented in 1576 for saying to Thickpenny that “if all covetousness were lost it would be found in you priests…..and in the chancel of Egleton”. The church was at this time served by Thomas Ashbrooke, a layman and schoolmaster at Oakham. He had aided in administering the Communion, which was celebrated only once a year—none ‘would receive often if it were oftener ministered unto them.’ Ashbrooke was ordered to desist from administering the sacrament and the vicar warned to have four celebrations a year. In 1586 it was reported ‘that the vicar letteth his benefice and there is an alehouse kept upon it.’ The negligence continued through the early part of the 17th century, when Zacharias Seaton, the farmer of the rectory, was presented for not keeping the chancel in repair. 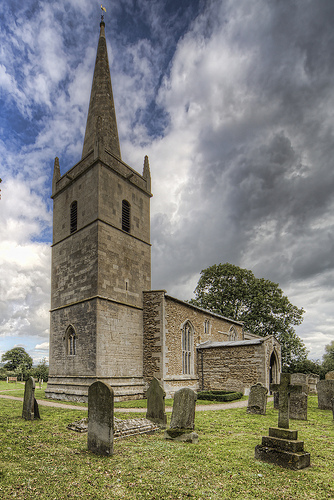 The church at Egleton consists of an ashlar faced west tower with spire, nave, chancel and south porch. There was a north aisle but this was pulled down and the arcade blocked. The most striking feature is the Norman south doorway and tympanum. This really is an impressive sight and has fine carved mouldings with animals and foliage and perhaps a human head. The tympanum has a wheel of six petal like spokes with two upright beasts. Also dating to the 12th century is the chancel arch with its large columns and fine decorated shafts. The west tower dates to the 14th century but the spire was added later in the 18th century. The windows in the south wall and chancel as well as the clerestory are ‘perp’ so probably 15th century. The square font dates to the 13th century. There are remains of the rood staircase and also a squint cut through the north wall of the chancel arch which would have been directed at the old north aisle. 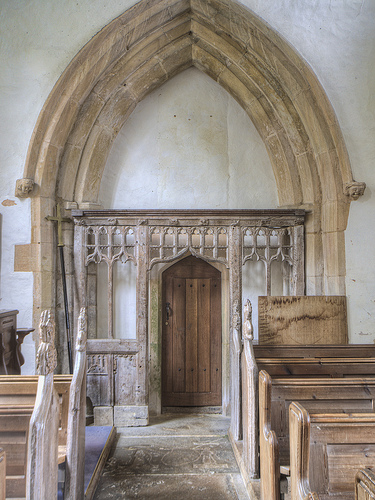 Egleton does not have any grand monuments or memorials but it is worth visiting for its fine south doorway and chancel arch. The church has character and being near to Oakham and Rutland Water there is always plenty to see and do. Open every day during daylight hours with limited parking outside. A good choice would be to visit Hambleton after or before this church. Definitely worth a visit.

The church at Egleton is usually OPEN. More information here.