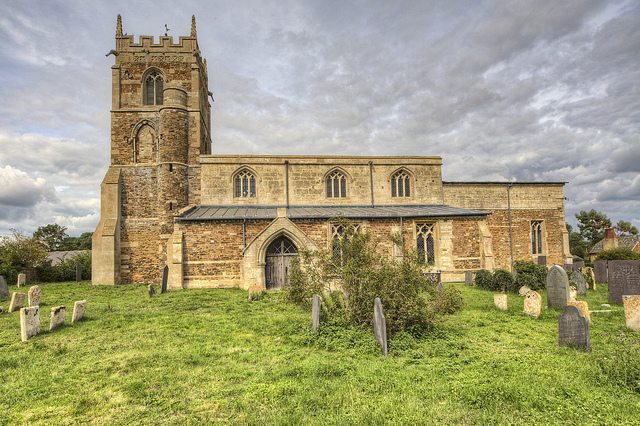 The north view of Edmonthorpe with external turret

This small village of around 80 residents is 17 miles from Leicester and 8 miles from Melton very close to the county border with Rutland. The name may refer to a Saxon monk called Eadmer or mean ‘east mound’ or ‘barrier’. Thorpe is a Norse name meaning ‘street, village or daughter settlement’ which is common throughout the Danelaw area. In the Domesday Book it is recorded as Edmerestorp and was held by Henry of Ferrers who also held nearby Wymondham. 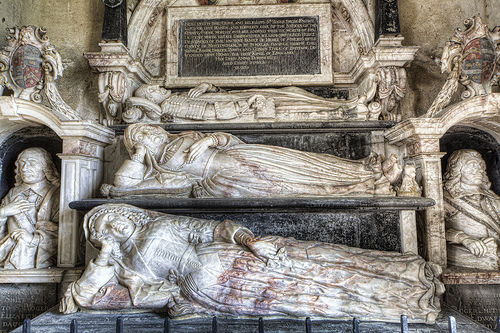 Monument to Roger Smith top, with his two wives below in the south aisle

The church is now in the care of The Churches Conservation Trust and has some fine memorials and a grand alabaster monument. It is a very pretty church in a peaceful location. The church has a west tower of which the lower stages date to the 13th century and are the oldest part of the church. It also has a nave, chancel, and north and south aisles. The tower was heightened in the 15th century when the clerestory was added, on the south side of the tower is the external staircase to the belfry which is unusual in Leicestershire & Rutland as most were built into the fabric of the tower. 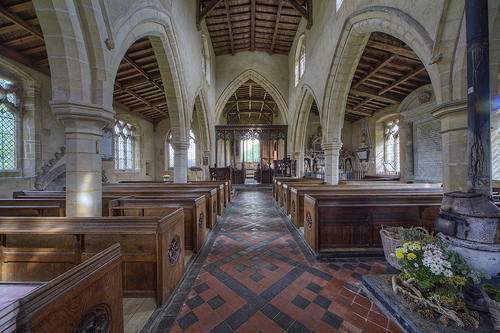 View down nave towards the chancel and screen, the nave was restored by the Victorians

The square windows in the south aisle are very attractive and date to the 14th century when the aisle was added. The chancel has three windows on each side, again of square design. The east window is a large Decorated design from the period 1275-1380. There are also some unusual quatrefoil openings in the chancel to the east, north and south in square panels which are low down. It has been speculated that these perhaps lit a crypt but they are too high up from the chancel floor. It seems to be rather a mystery as to what they were exactly installed for. The north aisle contains more 14th century fabric and has a piscina and aumbry and was probably used as a chapel before the Reformation. 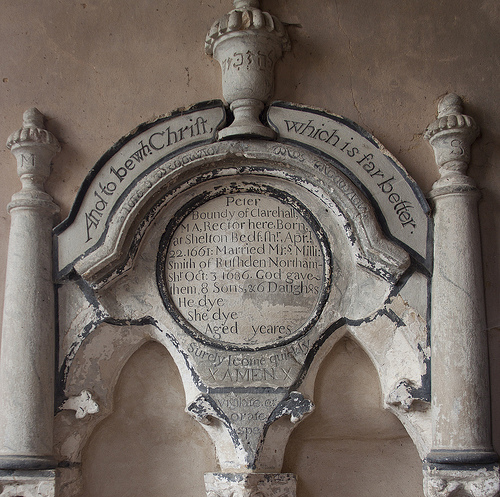 Monument to Peter Boundy with Latin, Hebrew, Greek and English inscriptions, he had 8 sons and 6 daughters.

The north porch is an 18th century addition although the doorway dates to the 14th century. In 1858 the Victorians completed restoration work under the architect Robert Winter Johnson of Melton Mowbray. The nave seating was installed, he unblocked the tower arch, rehung the bells, installed new floors and fitted a pulpit. The Pochin family who owned Edmonthorpe Hall kept a family pew with its own door instead of the new seating. The Hall was destroyed by fire in 1943 and only the Tudor stable-block survived. The chancel screen dates from the 15th century and is a fine example, the font is 13th century and there is some medieval glass fragments in the tower west window and the chancel north windows. 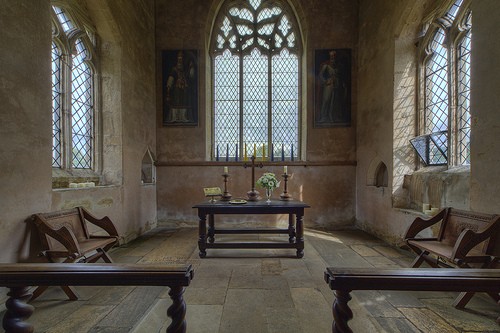 The chancel with paintings either side of the east window .

The church has four important monuments and these were restored in 2000 by Skillington Workshop Ltd of Grantham. Th most impressive is the monument at the east end of the south aisle, the window was filled in when the monument was installed in the 17th century. This grand piece to Sir Roger Smith who died in 1655 has alabaster effigies of himself and his two wives, Jane Heron (d. 1599) and Anne Goodman (d. 1652). There are also obelisks bearing shields of arms and busts of his son and grandson who died before him. Some of the carving is very fine. Next a wall monument to Edward Smith (d. 1762) made out of coloured marble with an egg shaped urn and black sarcophagus, then a white veined marble monument with pillars to Dame Olivia Pepys (d. 1710) and her husband Sir Edward Smith (d. 1720). Last in the chancel we have the monument to Peter Boundy who was the village rector from 1709-30. This is placed in the medieval sedilia and has inscriptions in Latin, Hebrew, Greek and English. 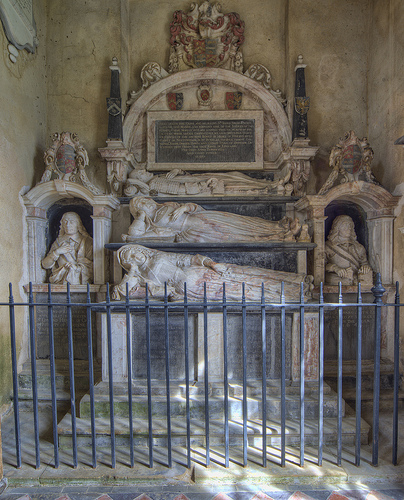 Edmonthorpe is a very fine church with some impressive monuments set in some of Leicestershire’s finest countryside so of course you should visit. The church is open at weekends and if you are passing in the week there are some key-holders listed in the north porch who live nearby. Nearest pub is in Wymondham which serves great food. Link above.