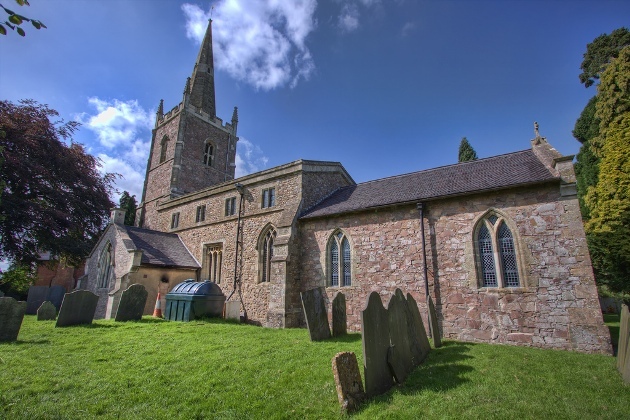 An interesting entry in ‘Nichols‘ tells us that in 1745 the Duke of Cumberland marched through the village of Dunton Bassett at the head of an English Army on his way to Culloden Moor to defeat Bonnie Prince Charlie, who with the remnants of the Scottish Highlanders was retreating from Derby. They were barracked in the village and church and some of the scored stonework inside and outside the church signifies this event with them sharpening their swords – of course other people will take the view that this is just a silly story. I will leave that up to you… 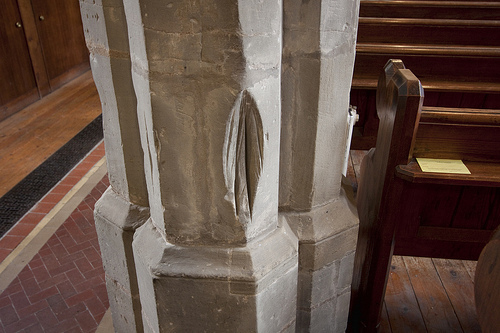 However another view is that Roundhead troops who used churches as barracks made the grooves when sharpening their weapons ready for the battle at nearby Naseby in 1645…the plot thickens. It could also have been the congregation sharpening their knives or arrows, and so it goes on.
The Village of Dunton Bassett lies approx 9 miles south-west of Leicester just off the A426 to Lutterworth a few miles further south. There was probably a Saxon settlement here before the mention of Donitone in the Domesday Book where a Robert de Buci held the manor. He probably came over with William the Conqueror and was given land as a reward in many parts of Leicestershire. There would have been a Saxon church probably on the same spot as the present one. The origin of the name probably means ‘town on the hill’ and the church commands great views over the surrounding countryside. 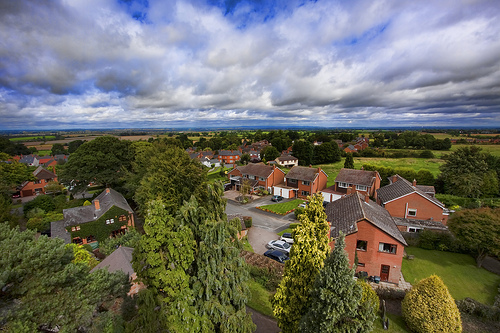 By 1181 the manor of Dunton Bassett belonged to Hugh, the Earl of Chester, he died in that year and passed the manor onto his daughter Geva who married Richard Bassett (who supplied the second part of the villages name). She is believed to have built the church soon after 1200 and her stone portrait sits over the doorway to the south vestry. There are also two portraits in the nave arcade which are believed to be the masons who built the church for Lady Geva. 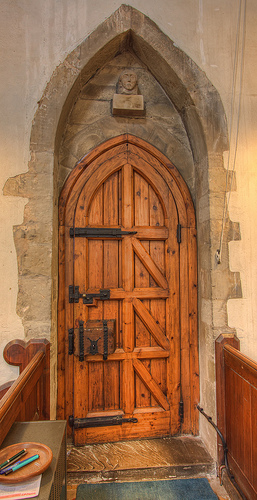 The Bassett’s held the manor until 1389 when it passed to the Shirley family. By 1564 there were 24 families in the village and the following year Francis Shirley sold all the manor, messuages (dwelling-houses, outbuildings, orchards, gardens etc) to Robert Brokesby (Brooksby sic.).

The church has a west tower, recessed spire behind battlements with spirelets, nave, chancel, north aisle and vestry. The oldest parts of the church which date from Geva’s time are the north aisle and nave, two south windows and the east window of the chancel. In the 14th Century the clerestory was added, as well as the roof, tower and spire. Some of the pews date also from this period and are still in the north aisle. In the 15th century further work was undertaken with the tower arch and windows, the chancel may well have been added then and this was rebuilt in the 19th century. The chancel arch dates from this period. 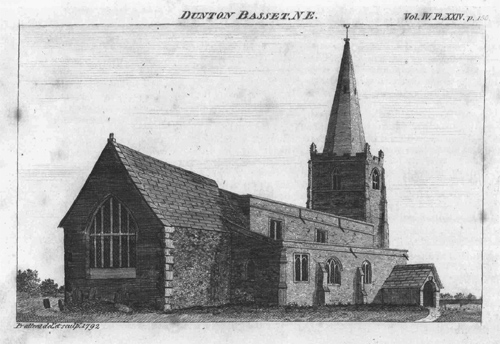 The vestry is modern and now houses toilet and kitchen which has been well designed and installed.
Entry is via the west tower, there is a stone coffin lid built into the wall of the tower on your left as you enter, it is as old as the church and was probably put there in the 19th century when found during the rebuilding of the chancel. 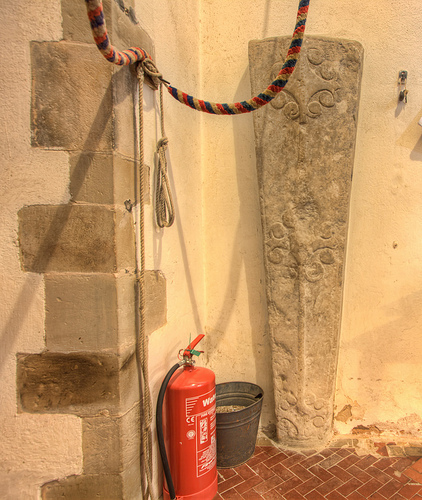 From 1209 until the Reformation (1520’s) the vicars at Dunton Bassett were chosen by Canwell Priory in Sutton Coldfield. This Benedictine Priory was founded by Lady Geva, who gave the priory the church and land at Dunton Bassett. In 1531 a Sir Edward Bradborn was ‘presented by the King, by reason of the suppression of the monastery of Canell’. There ended Lady Geva’s good intention.
The church sits on the high ground, and I must thank the churchwarden who allowed me up the tower to take the picture from the battlements below the spire where we could see for many miles. I do like the south view with its fine square clerestory windows and lower mixture of styles. 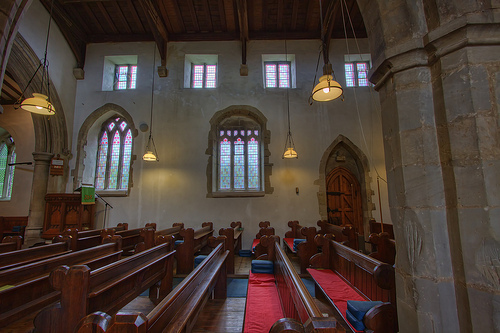 In all Dunton Bassett is a very fine church, they have also done a tremendous job on the kitchen and toilet facilities. Although sometimes I concentrate on the historical aspects of the building, we must remember that these churches have to ‘modernise’ if they are continually to be used in the future, the congregation at Dunton Bassett have done an excellent job on their church.

” William Rest died Sept. 15, 1729, aged 56.
Farewell my friends, likewise my children dear,
This toilsome world, with all its pain and care:
You soon must follow, for you cannot stay;
Our Saviour calls, and then you must obey.”

” Here lieth the bodj of George Moore,
who departed this life April 13, 1734, aged about 72.
Also the body of Finis, wife of George Moore,
Who departed tins life Jun. 8, 1745, aged 71.
To the memory of George Moore, and Finis his wife,
this monument is erected by George Moore their son,
in acknowledgement of their paternal affection to him,
whose appointment of this tribute, by his last will,
shewed a strong fense of duty,respect, and gratitude,
to his deceased parents.
The universal good character which he bore
among his friends aud acquaintances, who best knew him,
is a strong inducement here to insert that,
in the general course of his life,
he was a friendly, worthy, honest man,
and conscientious Christian.
His abode, the latter part of his life,
was at Potton in Bedfordshire;
Where he died, and was buried, in 1759.”

The church is still very active and access is fine with a short walk up to the church. There are facilities in Dunton with a couple of public houses and shop. Thanks to the churchwarden for the historical information that has helped in this text. 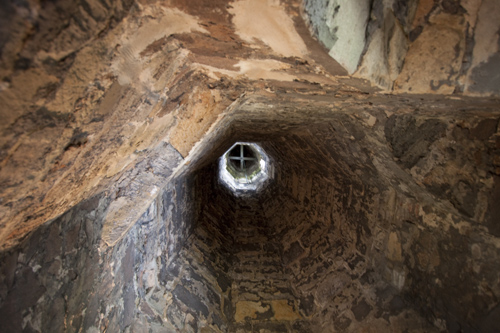 An image taken looking up the spire at Dunton Bassett Church