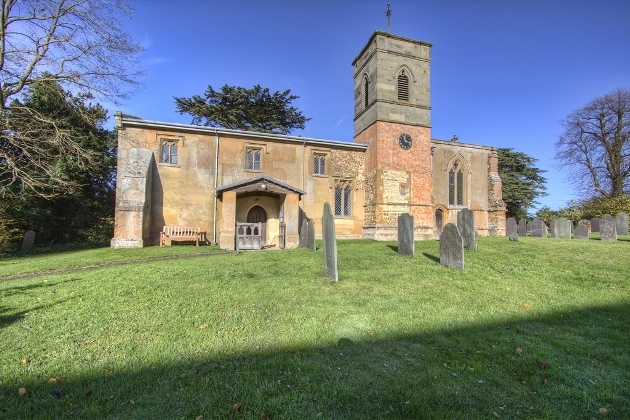 The unusual church at Cotesbach with its offset tower

Cotesbach is a few miles south of Lutterworth and fifteen miles south of Leicester. The first people to settle in Cotesbach were probably the Danes that swept through the country in the ninth century, and later, after King Alfred had reached a peace settlement in 879 giving the Danes the “Danelaw”, or land to the North of the Watling Street (now the A5) in which to live, Cotesbach probably became a stable settlement for the first time and began to put down its roots.

Many theories exist to account for the village name of “Cotesbach”, but the writer favours a combination of the old English word “cuit” meaning wood and “beche” meaning beech tree, thus cuit-beche meaning a beech wood. Another explanation could be “cot” or cottage and “boek” Danish for stream, thus the cottage by the stream. In the Doomsday survey of 1086 set up by William the Conqueror they recorded that “Cotesbece”, as they spelt it, was then a community of 14 households and a water-mill, but with no mention of a church. 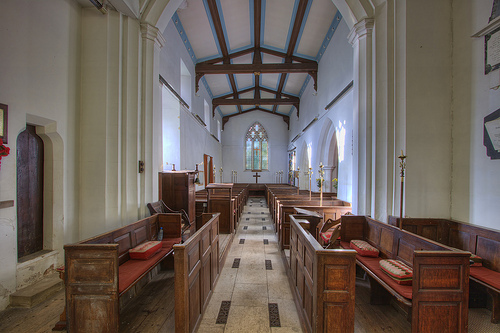 View from chancel to west end and nave

Part of the agreement made between the Danes and King Alfred was that the Danes would become Christian, but it took many more years before Cotesbach had its own church. We estimate that, probably after a wooden structure had preceded it, work was started on a stone church here in the 13th century. The first mention of a church in the village comes in 1279 when the then Lord of the Manor, Theobald de Verdon held also “the advowson of the church”, in other words he had the right to appoint the priest. Though no mention of a church as such has been found earlier than 1279, Cotesbach had its own Rector, Walter de Clinton, as early as 1221. To see some of the vestiges of the earliest stone building, walk round outside to the East end wall where at the base you will see the undressed stone boulders which are the oldest remaining parts of the church. Also very old is the little tower of yellow stone which encloses the helical staircase to the clock landing and the belfry in the present enlarged tower. This can also be best seen from outside since we stripped off the stucco in 1983 which had hidden it for the previous 150 years. The little window was discovered at the same time and reglazed. 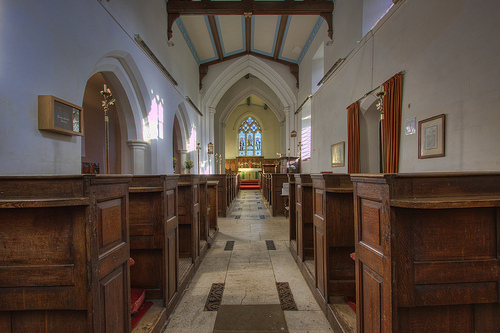 East view to chancel through nave, this is a beautiful little church

In 1312 Roger de Brustollia is inducted to Cotesbach as Rector whilst Lutterworth have their own Rector – Bertram de Verdon. Maybe this indicates that Henry de Bray during his 24 years as incumbent started the building of the first stone church in Cotesbach so that from then on we should have our own rector. Certainly that theory would fit the accepted historical dating of the origins of the present church building. During the last years of the fourteenth century the bell which presently hangs in the belfry at Cotesbach was cast by “Johannes de Yorke”, and cast into the metal around the rim it bears the legend “IN HONORE SCE TRINITATIS”. It could have hung at Cotesbach since that date and is still in service chiming the hours for those within earshot in the village. 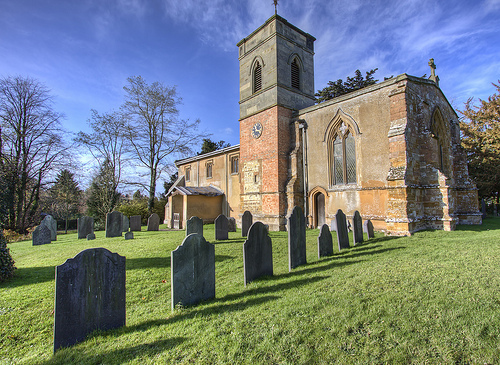 In 1702 a Dr Edward Wells, an academic from Oxford, who was a man of many accomplishments and much vigour left an indelible mark on our village. It was he who brought the church building back into good repair, building in the process the brick west wall which you see today using bricks that were made in the village. With bricks of the same type Dr Wells built himself a small rectory opposite the church and this is the central portion of the building which has now grown into the Cotesbach Hall that stands there today. Edward Wells also started the first school for village children  which was housed in the outbuildings of the Hall. Villagers were charged one penny per week per child. In 1812 Under the rectorship of Robert Marriott the younger, £400 was spent completely refurbishing and changing the church building bringing it substantially into the shape it is today. 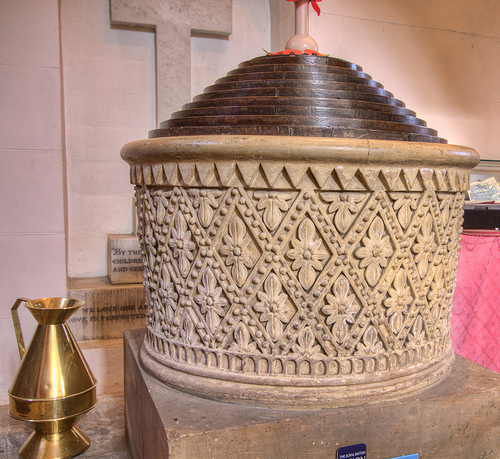 The richly carved font and cover

The old central tower seen in Nichol’s etching of 1795 was demolished, the present roof and decorative friezes built, and, using 14,400 bricks, the new side tower was built to its present height and width, and the interior chancel arches fashioned to accommodate the new clock loft and a chimney for the hot air from the new church heating system. Within living memory the church was still heated by this 1812 system, which involved an external fire at the west end from which heated air was ducted through flues still visible along the length of the aisle which eventually exhausted up the tower chimney. When the new building work was completed in 1812, stucco was applied all over the external walls which after surviving admirably for over 150 years, has only recently been partially removed. In 1919 at the end of the Great War, the church clock was “erected by the parishioners of the church as a memorial of the Great War and as a thank offering to almighty God on the conclusion of a victorious peace” The clock is a handsome cast iron flat frame clock with brass gearing made by Wm Potts of Leeds and has a double three-legged gravity escapement and a gravity strike. It displays on a three foot flat dial on the outside of the tower. At the same time as the clock in 1919 the stained glass panels were installed in the East Window of the chancel as a memorial to the two Marriott boys whose lives were lost in the Great War, Frederick Ernest and Hugh Digby, both killed in action in 1915 and Charles Marriott who died in 1919. The glasswork is probably the work of James Powell of London. A complete list of those of the village who lost their lives in the 1914 – 1918 War can be seen on the south wall just to the side of the Porch door. Thanks to Richard Oldham for use of his excellent text in this write-up. I do like Cotesbach church it is a very attractive looking building with its unusual squat off centre tower. The church is usually locked and there is car park space outside. For amenities Lutterworth is probably the nearest.