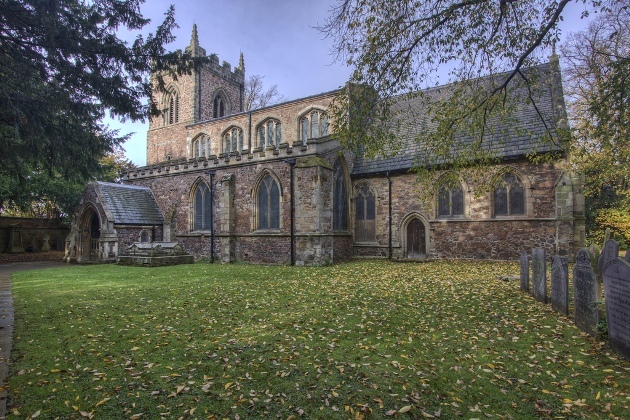 This village is five miles north of Leicester in the Soar valley near to Syston and Sileby. I have little information on the early years of the village so will concentrate on the church itself. The present church mostly dates from the 13th century and consists of a west tower, nave, north & south aisles, chancel and 19th century south porch. The oldest parts of the church are the north aisle and nave which date from the 12th century. 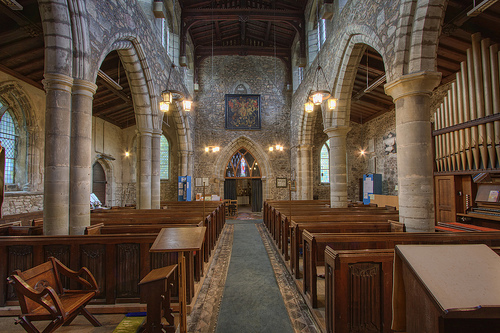 iew of west tower and nave. The original roof line can be seen in the west wall of the tower

The south aisle is from the 13th century the pillars are later than the 12th C north aisle and the clerestory was added in the 15th century. The tower dates from the 13th century and the ‘Grant of Arms’ of the Fisher family displayed on the tower wall above the arch. The original north entrance in the aisle was walled up in the 15th century. There are memorial tablets to several of the Fisher family of which Geoffrey Fisher who became Archbishop of Canterbury in the 1950’s is the most famous. 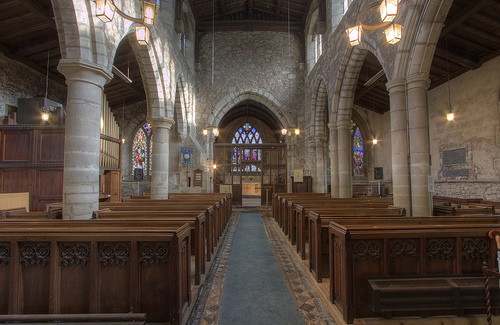 There is still the remains of the 14th century rood staircase, and the chancel screen is carved oak from the medieval period. The chancel itself dates from the 14th century and contains four crudely-carved bench ends dating from the latter part of the 15th century. There are a set of three sedila and a piscina in the south wall of the chancel. The fine east window is by Douglas Strachan (1875-1950) and was installed in memory of the local Astill family. 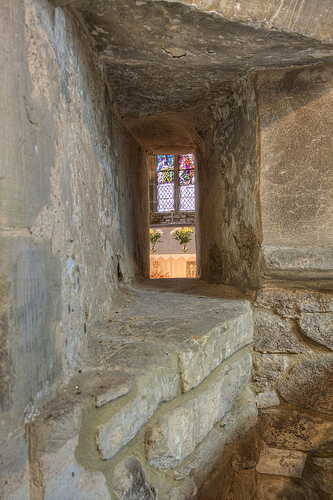 One of the ‘squints’ that would originally have been outside of the church enabling the sick or disciplined to be able to see and take part in Mass.

There are also opening in the inner walls called ‘squints’, these allowed views of the altar. The one near to the rood staircase enabled the assistant priest to keep pace with the priest at the high altar. The larger squint behind the pulpit was probably an external squint until the south aisle was built enclosing it. This enabled the sick and infectious and those under church discipline to follow the mass. The font dates from the 13th century and is located on what is one of the original stone piers most of which were removed in the 12th century when the north arcade was raised. The surface of the plinth on which the font stands is made up of 14th century encaustic tiles. The church was renovated by H Goddard and Son in 1864-65 (so far they have Victorianized nine churches on the Journal). 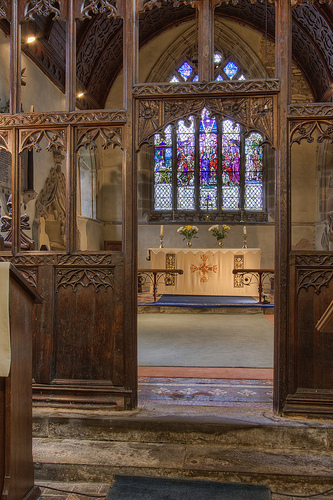 All Saints is pretty church and has a lovely churchyard. It does have a severe damp problem, this is affecting the font and floor. There are plans to fix the problem with a new sealed floor and they also have further ideas on modernizing the church. Access is fine with a small car park and there is a pub in the village however the church is usually locked outside of normal services.

Lindsay Slater
Also fond memories of Rev. Peter Yates. I was confirmed in this church in the 1960’s, lived at Cossington Hall.

Anthony Mead
Fond memories of the rev Peter Yates who presided at the church in the early 1960’s.

Pam
What beautiful pictures! I was so grateful to see these. My 9gg grandfather (John Webster ) was an active member of this church in early 1600s, as was many generations of Websters before him in Cossington. Thanks for bringing it alive!