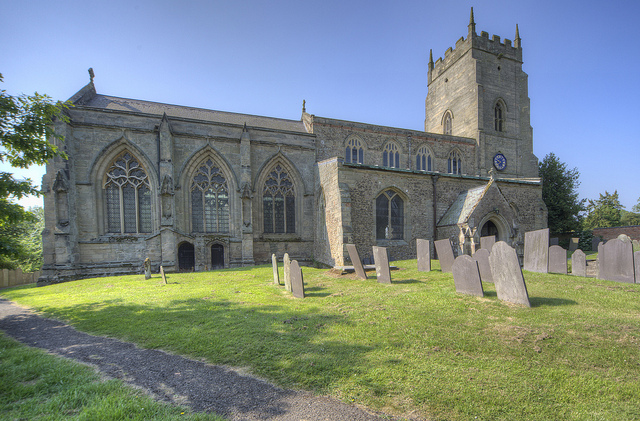 Claybrooke has an amazing Chancel and wood carvings

Claybrooke Parva and Magna are in the south of Leicestershire near to the A5 and the county boundary with Warwickshire. The parish church of St Peter not only looks after the parishioners of Claybrooke Magna and Parva but of also nearby Ullesthorpe and Wibtoft. Although Wibtoft has a small chapel, Ullesthorpe has none although in medieval times there may also have been a chapel there.

This lovely church is sited near a bend of the road and is positioned back with a pretty drive in front and surrounded by trees and open ground. This church has a real presence and the chancel is a delight. The church consists of a west tower, nave, chancel and north & south aisles. The tower was probably rebuilt in the 17th century; the lower parts are older with dated stones for 1614 and 1615 further up. The chancel dates from around 1340, but other parts of the church date from perhaps a slightly earlier period. The arcades in the nave date from the Perpendicular period (probably 14th-15th century) and are pink sandstone piers with arches of double wave mouldings. On the tower wall inside the nave can clearly be seen the steep previous roofline before the later clerestory was added. 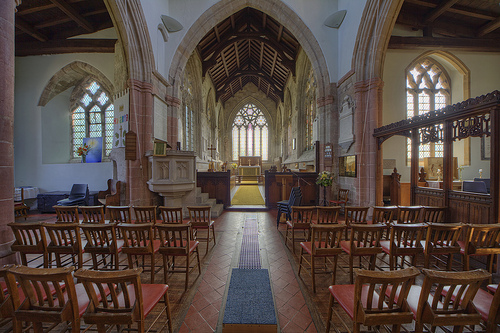 Nave and chancel view, the east window is Victorian added by E.E Street 1878.

Claybrooke church is justifiably famed for its fine chancel which somehow seems at odds with the rest of the church. This part of the building is far grander than the rest with its three large-light windows with flowing tracery. There are remains of medieval glass (circa 14th century) in the windows and only one window in the south is of stained glass, this dating from 1878 during the restoration by a fellow called E. E. Street. When Nichols wrote his History books on the county the east window was bricked up, the current window was probably installed in the Victorian restoration. 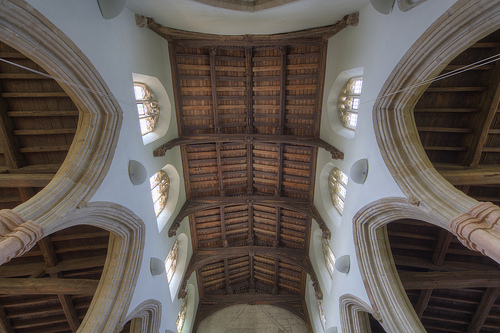 Some of the original rood screen survives at the entrance of the chancel and on the external walls of the chancel inbuilt within the buttresses are vacant niches which would have held statues. There are two north doorways, one for the priest and one originally from the chancel to the sacristy. The chancel still shows some remains of the original paintwork around a doorway, and in fact it was probably all painted in rich colours and gilded. Today it is still impressive.

Also of interest is the nave roof which has undergone major restoration. This has many wood carvings including a green man, monsters and devils and many more figures of which only some are shown here. There has been some major research on the church by one of the villagers which is also available within the building. 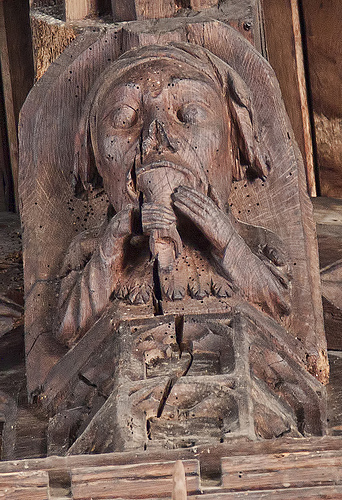 One of the many wooden carvings – take binoculars

There is some parking by the church but unfortunately it is usually locked outside services, this is a real shame as the chancel is perhaps one of the finest in the counties and it is a church full of character. There is a pub in the village but no other facilities.