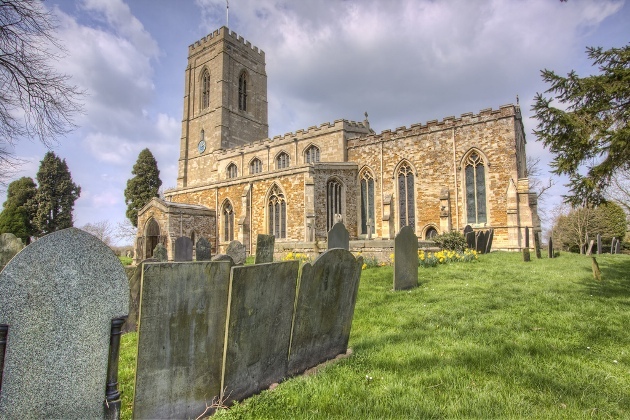 One of the finest churches in Leicestershire & Rutland

The village of Church Langton is 4 miles north of Market Harborough and is surrounded by the small satellite villages of East & West Langton, Thorpe Langton and Tur Langton. The ancient parish of Church Langton was the ‘mother’ church for the other villages and the church stands over 400ft on the crest of a ridge and can be seen for miles around. The area is known as ‘the Langtons’ and is popular with walkers, cyclists and those looking for a quieter part of Leicestershire rather than the busy city and suburbs.

There was a Saxon settlement at Church Langton and since the 12th century the daughter settlements of Tur Langon and Thorpe langton had their own chapels. You can read more on these on their own entries. 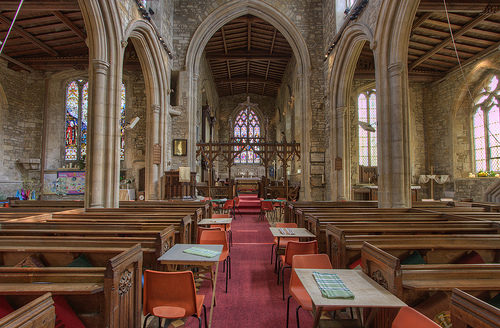 The nave and high chancel arch of this impressive church – tables out for ‘cream teas’. Summer only

The first thing that strikes you about the church is its magnificent tall tower of grey ashlar. It has clasping buttresses with many set-offs, a large west doorway, tall two-light bell openings with a transom. All this is perpendicular and similar to many more major towers in this part of England. The church consists of a west tower, nave, north & south aisles, chancel and vestry.
The north aisle dates from the late 13th century, whilst the south aisle is slightly later from c.1330, some of the tracery dates from this period. The chancel although restored by H. Goddard & Son in 1865-66 also dates from around 1300, probably before. The alabaster reredos in the chancel is a representation of the Last Supper by da Vinci completed in 1892 and three years later the oak rood screen was added across the chancel arch. The church is very tall and the four bay arcade are dated with the clerestory to the 15th century.

The sedilia and piscina in the chancel have cusped ogee heads of c. 1320. The south doorway and porch also date from the early 14th century. Another feature of this period is a large bracket on the east wall of the north aisle which rests on carved corbel heads. A rood-loft stair at the south-east corner of this aisle is contained in a semi-octagonal turret which projects externally. A bracket for the rood remains on the south side of the chancel arch. The octagonal plain font dates from 1662. In the vestry is a crudely carved sculpture of a naked standing figure probably Norman. There are some bust reliefs in the chancel and in the south aisle a recess with recumbent effigy to Sir Richard Roberts died 1644. 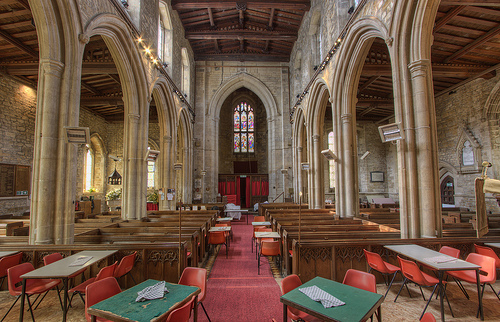 In 1865 the mausoleum to the Hanbury family was demolished and its coffins were removed to a brick vault under the new vestry and organ chamber which was then being built on the north side of the chancel as part of the £3000 renovations by the Goddards (they do get around). The Hanbury Monument was put in the vestry and has a weeping figure of a child, supposed to be a copy from a monument by Blasset in Amiens cathedral. Probably connected with John Hanbury died 1774 aged ten. This is not usually open to the public as the vestry is locked. 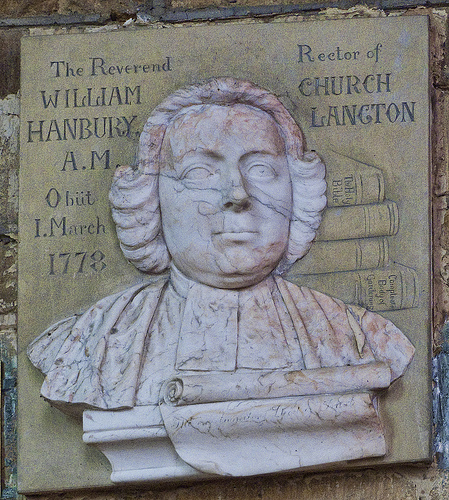 We must discuss further the Hanburys of Church Langton. In 1753 the Rev. William Hanbury who was a keen gardener and architectural enthusiast embarked on commercial nurseries at Gumley and Tur Langton which were very successful. He also organised three music festivals at the church between 1759 and 1761 to contribute to the charitable trust he established to finance his extraordinary collegiate foundation. Though worked out in detail it was unrealized, but it would have been a ‘truly gothic’ church larger than any English cathedral with library, museum, music school, hospital and many more offices and areas of learning. In fact Handel’s Messiah was the first performance of the music ever in an English church and many of the gentry came to Church Langton to see the event including the Duke of Devonshire who had to lodge with a tradesman. 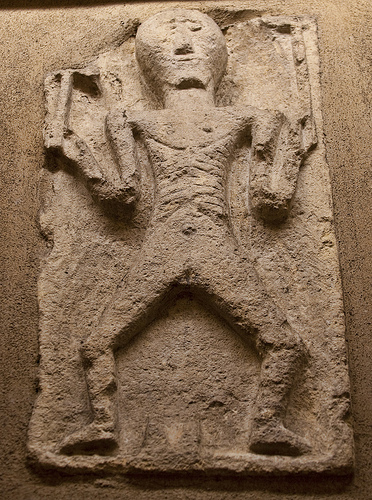 The Hanbury charity was founded in 1767 by the Revd. William Hanbury. It is governed by a Scheme of 1895, which was amended in 1922. Since an order made by the Charity Commissioners in 1905, the charity has been divided into two parts: the Educational Foundation which finances the Hanbury Schools; and the foundation which provides three annual sums for the provision of beef, hospital services, and organists’ salaries. The fine school buildings in the village built again by the Goddard family were paid for by the trust and built in 1873. There were attempts in 1922 to change the remit of the charity to support the church’s fabric but this was unsuccessful. Grants are still given today from the Hanbury Trust which is still supporting the village although the schools are not now used. For many years they were used as Field schools where school children from all over Leicestershire visited and stayed for a few days to enjoy the countryside. 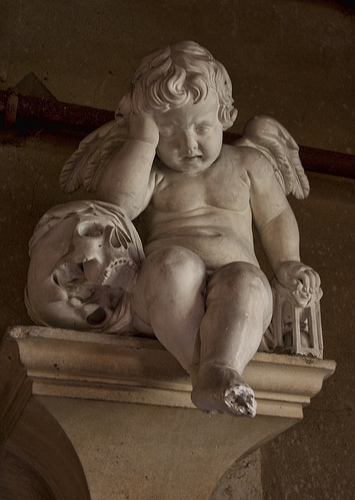 Once outside the Hanbury monument is now in the vestry.

Church Langton is worth a trip out, it is always open, has a good pub within easy walking distance and is set in some of Leicestershire’s finest countryside. On Sundays (in 2015) in summer (Easter to October 3rd) they servercream teas from 15:00-17:00 to raise funds – even more worthwhile to take a trip out to see this remarkable church and its fascinating history with the Hanbury’s. My only disappointment is that William Hanbury never completed his dream, what a sight that would have made on the crest at Church Langton.

Steffan Hughes
What an outstanding parish church this is and really a magnificent example of an English Country parish church. The rolling hills of West Leciestershire provide an excellent setting for a superb church. We must not forget the glory of the Georgian Rectory in Chrch Langton also largely built by the Hanbury’s which is certainly the finest Georgian building I have seen and possibly the finest Georgian building in England.  Unsurprisingly Church Langton was the primary living in Leicestershire in the middle ages and the results show.

Maggie Wilson
Visited Church Langton last w/e. Good to see evidence of church being used by all ages, as would have happened in past times but also sad because it was so untidy that it seemed neglected. Wish I’d known about this website then as would have liked info. before visit and none available in church. Think this is a fantastic project – thank you very much. [told about site by Tony, bell ringer]