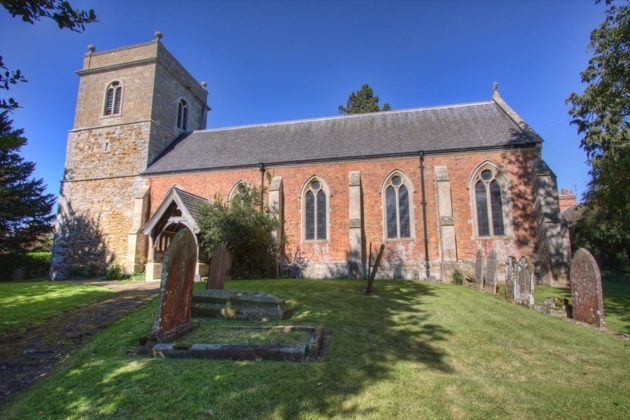 Another fine church at Carlton Curlieu

This small village of nearly 30 people is some 11 miles south-east of Leicester and a couple of miles north of Kibworth. In the Domesday Book it is recorded that the manor belonged to (yes we have met him many times!) a Hugh de Grentemesnil who was given many manors and land throughout Leicestershire and further a field for his support during the Norman Conquest. There were two manors within Carlton they both passed through many families until in 1597 a Thomas Palmer of East Carlton Northants bought one manor, and in 1654 Sir Geoffrey Palmer acquired the other. The manor has been in the hands of the Palmers ever since and they reside at the 17th century Hall in the village today. 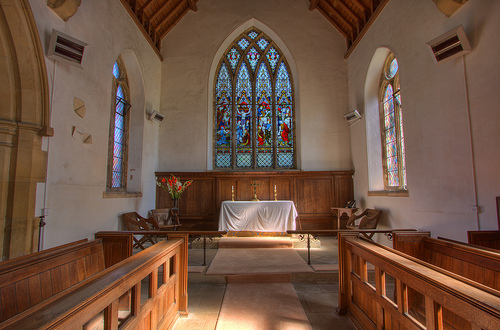 Chancel area and altar, the church was rebuilt in 1767 and restored in 1880

The church of St Mary’s has been largely rebuilt, although the large tower dates from the Norman period (11th-12th century). The top of the tower with the belfry was added in 1686, there are three bells all inscribed and dated 1732. The church has a nave, chancel, south porch, and north trancept/vestry and organ chamber, originally there was a north aisle but this was demolished in the 18th century rebuild. There is a still a fine Norman arch at the west end of the tower. 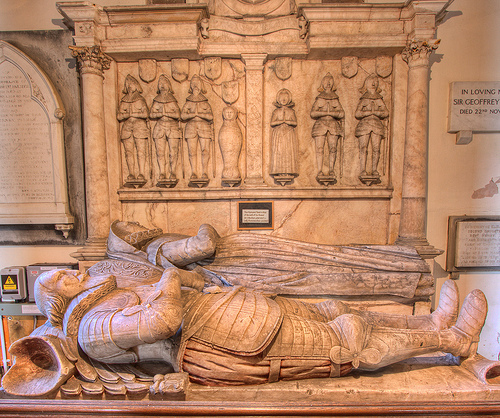 The alabaster monument to Sir John Bale and wife

In 1767 the nave and chancel were rebuilt and none of the earlier church survives. A further restoration in 1880 resulted in the south porch being rebuilt and the roof raised and renewed. The north chapel was also rebuilt and then used as a vestry and organ chamber, this has ‘hidden’ some fine monuments behind the organ but you can still get to them although it is a ‘squeeze’.
Above the arch are the Royal Coats of Arms of George III (1801-1816) but it is behind the organ that the main interest of the church is housed. There is a fine alabaster monument to Sir John Bale (died 1622) and his wife Frances (died 1624) and above them a carved relief of their children standing over them. The Bale family had been Lords of the manor during the 16th-17th century.
In the window behind the monument are still some 15th century glass showing the Palmer shield, the seven shields of arms illustrate notable marriages in the Palmer family. There are other wall monuments to the Palmer family on the east wall of the vestry. There is also a further monument outside to a William Fenwicke (died 1733) on the north wall of the chapel consisting of a obelisk and inscription as below; 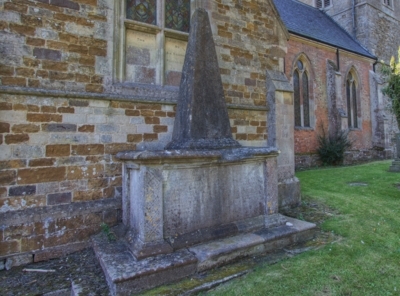 “Here lies WILLIAM FENWICKE, Clerk of the family of BRINCKBURN in Northumberland. He was a faithful & powerful labourer in Christ’s vineyard, exercising his Ministry with great diligence, and a most affecting zeal, first in the Parish Church of Thackham Sussex and afterwards in that of Hallaton in this county, and last of all in this, of all which Churches he was successively Rector. He was a great lover of good men & a constant promoter of good designs. He was long a member of the Society for promoting Christian knowledge to which as well as to the Society for propagating the Gospel in Foreign Parts, he was a constant yearly contributor; & to each of them at his death he bequeathed the sum of twenty pounds. He also bequeathed the sum of twenty pounds towards teaching the poor children to read at Hallaton, and being thus full of good works as well as full of days. He departed this life in the 77th year of his Age, Oct 8 1733 & lies sleeping here in sure and certain hope of the resurrection to eternal life through Jesus our Lord.
He married CICELY daughter of GILBERT COLES D.D by whom he had one son & two daughters; & in whom he found a wiling partner in good works and devotion. Most happy he thought himself in such a wife & always thankfully acknowledged the Providence which led him to such a choice: She died Jan 5th 1741. The righteous shall be had in everlasting remembrance” 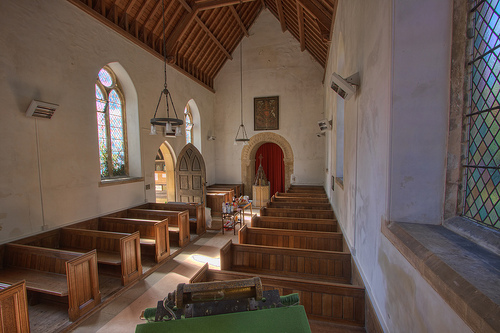 View of nave and west tower arch from pulpit

The churchyard is just as pretty as the actual building and although the Norman tower looks odd against the later brick nave and chancel it adds character. I visited during the yearly Ride & Stride event – may I add that they put on a very good spread for the walkers and riders with chocolates, cheese, biscuits, drinks and they excelled themselves!
There are no amenities in the village, parking is limited by the church but access is fine. The church is not usually open which is a shame as this church is worth a visit.

Toni Smith
If you would like to see transcriptions of the graves in and around the church in Carlton Curlieu, go to the following link