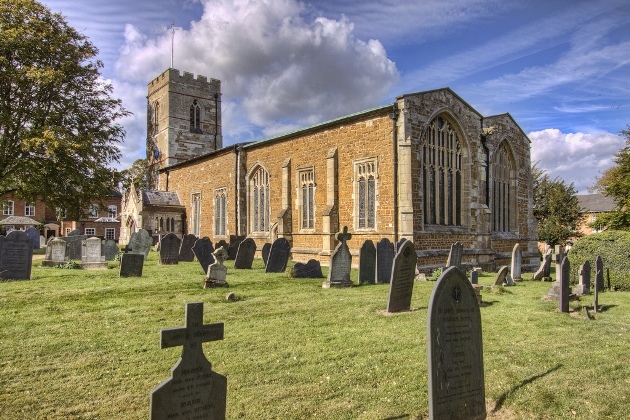 The pretty church at Burton Overy

This is another pretty village that lies some 8 miles south-east of Leicester. It is recorded in the Domesday book as Burtone, it was later known as Burton Novrey, before eventually ending up as Burton Overy. The population today is around 300. After the Norman Conquest it was acquired by my old friend (I must see his name in most parish histories) Hugh de Grentemesnil.

This is an impressive church from the outset when viewing the church from the entrance. The two large east windows both of a similar design are separated by a large gargoyle that meets the two roofs from the chancel and north chapel. The tower is the oldest part of the church and dates from the late 13th century as does the south entrance. The church consists of a west tower, nave, chancel and a large north chapel which was originally a north aisle which has been extended. 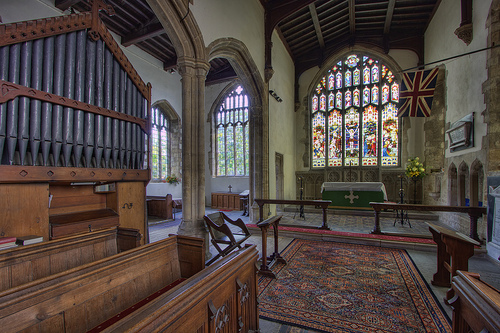 The chancel and east window with the Lady Chapel to the left.

Most of the building dates from the 14th-15th centuries and the Lady Chapel (originally the north aisle) was added in the late 15th or 16th centuries. The font dates from the 13th century but the heavy oak cover was made between 1958-1968 by a DIY rector, the Reverend Lancelot Foster. 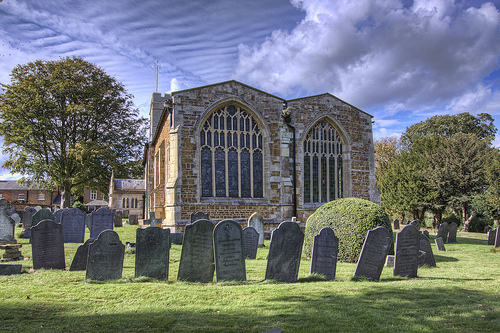 The fine east end windows of the chancel and Lady Chapel

The church has has an impressive rood screen that dates from the 16th century and in the chancel we have a triple sedilia and piscina with ogee arches from the 13th century. There is also another piscina in the south wall of the Lady Chapel. The arcade which divides the nave from the north aisle has three bays and two circular pillars with moulded capitals. The clerestory was added in the 15th century. 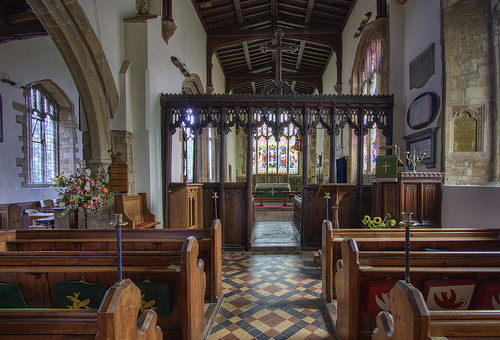 The corbels which support the roof timbers of the nave depict the heads of either animals or people. The corbel over the pulpit may have been intended as a ‘speak no evail’, and the corbel opposite the door is believed to depict a previous rector. The pulpit and pews were installed in the 1860’s and the organ was donated by a Captain Sutton in 1874.
The ‘Thorp’ rectors had a long and close association with the church. From 1852-1916 (the second longest incumbency in Leicestershire) Frederick Thorp was the ‘hunting’ parson, he was descendent of a Theophilus Burditt rector during the Civil War who was expelled by Cromwell’s Parliamentarians. The Reverend Frederick Thorp’s son, Charles, became Admiral Thorp and donated St Andrew’s with the Union Flag which hangs in the chancel which came from the gunboat Thirsk where he had served as 1st Lieutenant. The Thorp rectors are commemorated in three windows in the south wall of the chancel these were installed in 1857. 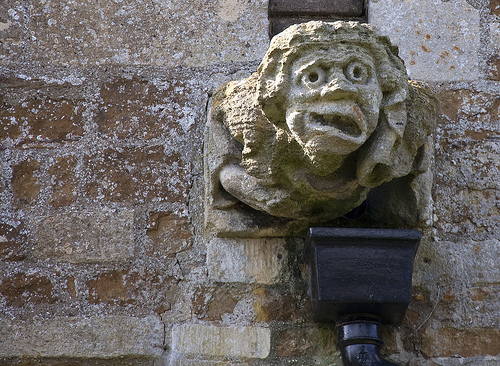 One of the fine gargoyles at St Andrews

The church is in a very pretty location with the old rectory attached to the churchyard to the west. There are many great features in the church and the large north Lady Chapel with its fine east window is very fine. I have added a link for a ‘great potted’ history on the village which is well worth a read. Most of the text for this entry comes from the Church History A4 sheet in the church.
As an added incentive to visit there is a public house in the village and parking for the church is along the road outside. Disabled visitors should be ok apart from a few small steps into the church. This church is open every day and is worth a visit in my opinion, some interesting features, great history and if you go the right time of year free walnuts from the tree near the east windows. What more can you ask for?

Kate Nicholls
Hope to get over to England later this year or early next. Longing to see for myself the gravestones of all my Beardsley ancestors and see if I can get further back from William Beardsley born 1750. Apparently his son, also William farmed 400 acres in Burton Overy. If anyone knows anything about the actual fields these were and where he lived, I would be very grateful. Apparently he built Glen House in Great Glen. Need to find the ties between these two locations.

Dierck Beardsley
Well, Kate nicholls( my sister and i made it over to Burton Overy and found our ancestors graves. It was quite emotional. The church was beautiful, and the grounds so well kept. It was an interesting feeling being so close to my earliest known ancestor. It was a shame I couldn’t find where they lived.

Frances Rouse
How moving to find the church where one’s ancestors worshipped, and so beautiful – Sultzers, Woodwards and associated families.