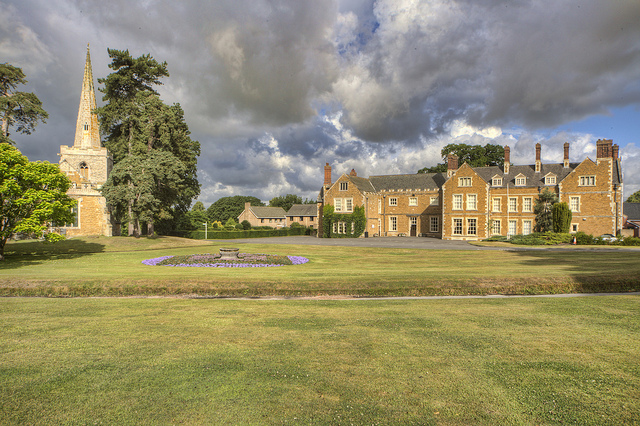 Nine miles north-east of Leicester is the church of St Michael set in the pretty grounds of Brooksby Hall. The area was settled by the Danes and much later Brooksby Hall became the home of the powerful Villiers family who are first mentioned at Brooksby in 1235 but are of Norman descent and probably arrived in 1066 with King William. 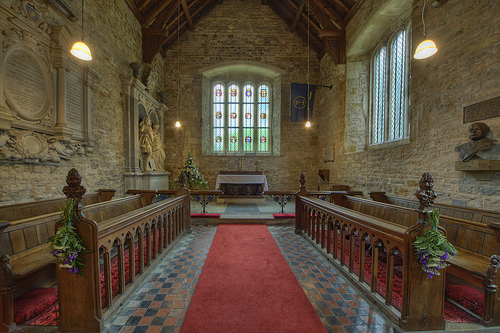 Above: The chancel area of this small church with monuments on left.

There was a village around the church but it disappeared after the Black Death decimated the village probably in early 1349. This had a devastating effect on the country and population and many villages were depopulated at this time. I hope to add a detailed section on Leicestershire & the Black Death in the near future.
Brooksby survived, but only as a home to the Villiers family who remained at Brooksby until 1712. Their most famous descendent was George Villiers, 1st Duke of Buckingham, (b. 1592 d. 1628) who was born at Brooskby and became a favorite of King James 1st of England. 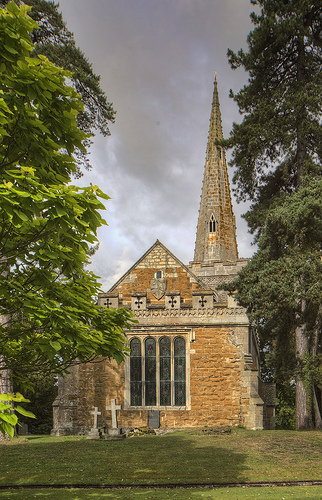 East end of church with the pretty crocketted spire

There has been much discussion on whether the King and Duke were in fact lovers but this remains controversial. His military exploits were not that successful and neither were his attempts in foreign affairs. In 1627, Buckingham led 7,000 men to La Rochelle in France to lift the siege of Huguenot allies, it was a failure and led to the loss of 4,000 men. Whilst organizing a second campaign in 1628 he was stabbed to death at the Greyhound pub in Portsmouth by a John Felton, an Army Officer who had been wounded in the first operation, he was subsequently hanged in October 1628. Buckingham did marry Lady Katherine Manners who was a daughter of the 6th Earl of Rutland and they had three children, Charles (who died as a baby), Mary and George. After 1712 the Hall passed through many families including Earl Beatty of Brooksby and North Sea, an admiral of the Royal Navy and commander of the British battlecrusiers during the Battle of Jutland. In the 1950’s the Hall and grounds became an agricultural college which also specializes in equine and animal care studies. 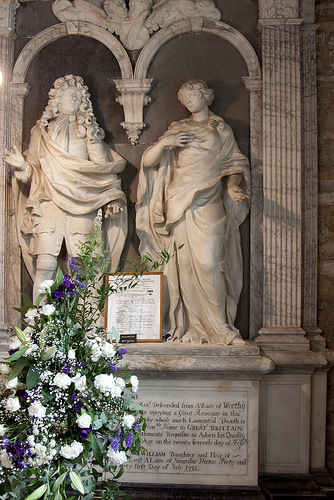 The memorial to Sir William Villiers and wife.

The church of St Michael lies in the grounds of the Hall and dates from the 14th century. There is mention of an earlier structure on the site but little or any of this fabric survives in the present structure. The tower is early 14th century with a frieze, battlements and recessed spire which was rebuilt in 1881. The rest of the church consists of a nave and chancel which is on different alignments. The rest of the church dates to the Perpindicular period but some of the features are early Tudor (late 15th to 16th century), these being the windows. 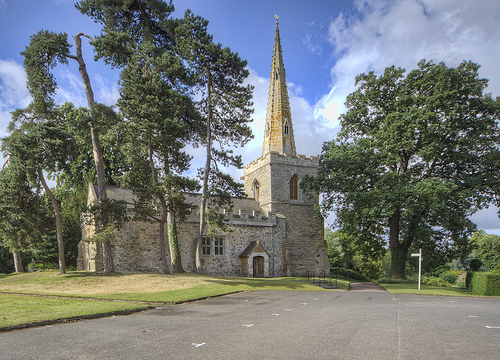 There was a general restoration in 1879 by R. W. Johnson, the nave south window was added in 1911. There is an incised slab to Henry Villiers (d. 1481) and his wife in the chancel. The large standing figures in grey and white marble are Sir William Villiers (d. 1711) and his young wife who died in the same year. This excellent monument is similar to the great monuments at Exton and Bottesford. They are both dressed in the fashion of their time but with Roman style cloaks. One description states that William is looking rather pompous with his wig, but I found both of them to be fine examples of this type of monument. We also have a bust of Admiral Beatty within the nave area.
I believe this church is open summer only at weekends, it is popular for weddings being within walking distance of the Hall and grounds so please take note of this as it can be busy. There is plenty of parking and nearby Hoby has a pub with facilities. Brooskby is a quaint little church set in some very pretty grounds with a fine setting. Although the church is rather plain it has a fantastic monument and has been well cared for, definitely worth a visit.

Malcolm Briton 2012.7.20
This is a very interesting and informative description of St Michael & All Angels Church and the history of Brooksby.
Just two points:
The incised slab in the chancel commemorates another William (not Henry Villiers).
Although the Black Death is likely to have depleted the population in the 14th century, the village survived until the end of the 15th century when the profitability of woll production influenced Sir John Villiers (d.1506) to enclose the fields, driving the villagers out.
Malcolm Britton
(Churchwarden, St Michael & All Angels, Brooksby)