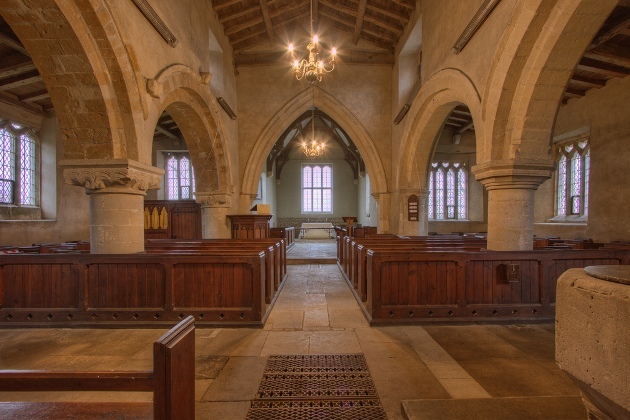 The small village of Bringhurst in the far south-east corner of Leicestershire is sited on a hill which was probably the site of an Iron Age hill fort. In the 11th century the manor of Bringhurst was held by the Abbey of Burg (Peterborough Abbey) and before that the Saxons had a settlement here in the 6th century on this high hill that overlooks the Welland flood plain. There is nothing remaining of the probable Saxon church that sat on the same site and after the Norman invasion it is thought the Norman abbot of Peterborough Abbey had the Saxon church pulled down and a Norman structure was then built. 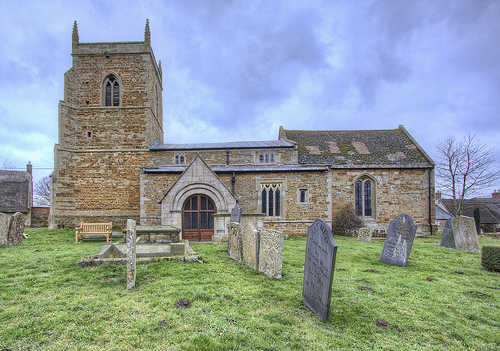 South view of church in this pretty village

The north nave arcade dates from the late Norman period (around 1150AD) as well as some features in the west wall of the nave.
The church consists of a 3 tiered tower, nave, chancel, north and south aisles with a Perp clerestory. As already stated the late Norman north arcade of two bays is perhaps the oldest part of the structure on display and has some nice carved features. Nikolaus Pevsner in his ‘Leicestershire & Rutland’ the buildings of England book describes the later Victorian restoration by Ewan Christian in 1862-63 as ‘drab’. 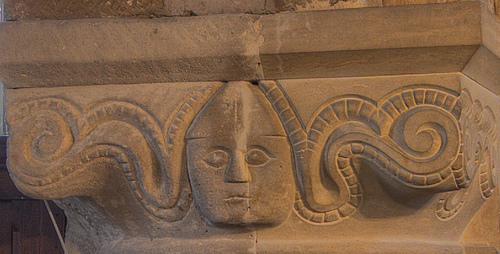 The tower dates from 1180 and the top stage was altered in the 14th century. The tower now houses no bells, these were removed about 1970, probably for safety reasons. The southern aisle was added in around 1200 but the chancel is harder to date due to the Victorian restoration. However it may have undergone several major alterations over the centuries before Ewan Christian completed a poor ‘Victorianization’ of the chancel.
A unique feature of the chancel is a Royal Coat of Arms dated 1814, but which shows the arms current between 1714 and 1801. It is not this which is unique but the palimpset to the arms of a primitive painting containing the opening words of the Gloria and depicting cherubs faces with wings, or in some cases, with one wing attached. It is a fair assumption that this and the Coat of Arms are work of local men. 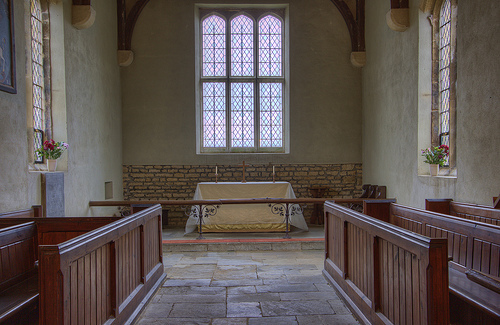 The heavily restored chancel rebuilt during 1862-63

St Nicholas at Bringhurst is set in a pretty ironstone village with some fine views. The church does not have any grand monuments or fabric of architectural interest but it is a pleasant proportioned building set in the middle of the village itself. There are no facilities in the village, the nearest is the Sun in Great Easton nearby but they do not do food, unusual for a pub these days.
Parking is also difficult and access for disabled people could be problematic. I need to check on the opening times of the church. At the moment I will mark this church as locked out of normal service hours until I have checked.