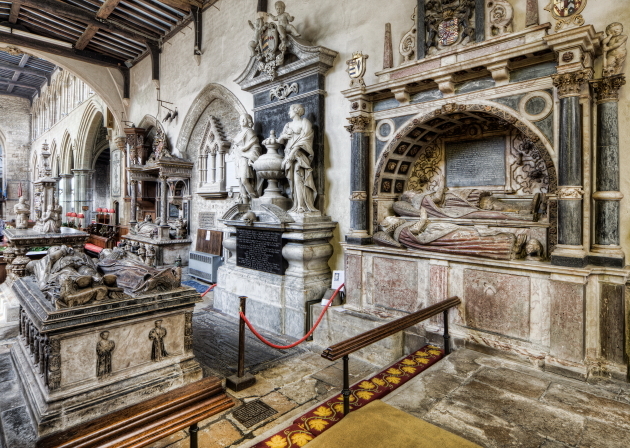 The nave full of monuments at Bottesford is astounding

This extraordinary church is probably nearer to Nottingham than Leicester and is 16 miles north of Melton Mowbray at the most northern limits of the county of Leicestershire. The distance should not stop you at all from visiting this fine church but more on the reasons soon. This large village has a population of over 3,000 and is named after the ‘ford’ over the river Devon. I could write more on the village but if the truth be known I think I ought to concentrate on the church itself, it should be quite apparent by the end of his text why this is so. First of all this church was the parish church for nearby Belvoir Castle where the Lords of Belvoir played an important part in the development of the church and which they founded with a Robert de Roos in the 13th century. Another family called the Mareschall are also recorded in the early churches history and they held manors in Bottesford as well as holding Bishoprics in Exeter and LLandaff. The arms of the Roos and Mareschall’s are displayed above the eastern pillars of the nave.

The most noticeable thing about the exterior is the magnificent spire that rises to a total height of 212ft, the tallest in Leicestershire and one of the grandest, it dates from around 1420. The actual spire is 113ft and crocketed with three tiers of gabled lucarnes. In 1864 the tower was suffering from cracks and emergency work had to be undertaken to shore up and dig new foundations to make it safe and fix the problem.
The nave with its five bay arcades has carvings of the Deadly sins and dates from the 15th century. The aisles are earlier and date from the 14th century as does the porch which housed a priest’s room in its upper floor. There are also the remains of a medieval ‘doom’ painting above the chancel arch in the nave. The north and south trancepts are again 14th century and would have been used as chapels or chantries. 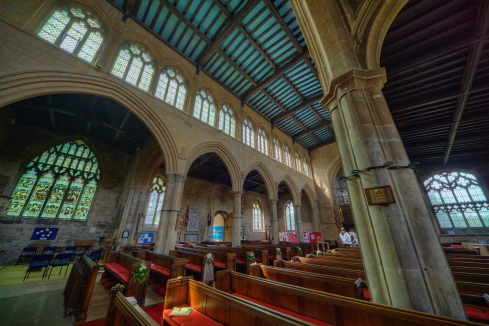 The nave rebuilt in the 15th century has a fine clerestory

So now on to the chancel which dates to the 12th century and is perhaps the oldest part of the present church. The church is closely tied with Belvoir Castle and the Earls and later Dukes of Rutland whose monuments now fill the chancel in a multitude of styles and shapes. In 1538 with the dissolution of the monasteries Thomas the 1st Earl of Rutland moved five family memorials and tombs from Croxton Abbey and Belvoir Priory. On the death of the 1st Earl, all family burials were placed in the church and this lasted until 1828 when a new Mausoleum was built at Belvoir probably due to lack of room at St Mary’s.
Apart from the various monuments there also three vaults which contain at least 50 recorded burials from the Manners and Roos family which became the Earls and later Dukes of Rutland. These are in the chancel area under the high altar, behind the present organ and one vault below the vestry. In fact there was a vestry which was being used as a school around 1700, but as the Duke at the time required more vault space so he built a school in the churchyard (now gone) and converted the vestry into a vault.
The magnificent memorials that fill the chancel grab your attention. You cannot see the altar from the nave due to the alabaster tombs and fine figures, so an altar was moved to the west end of the chancel so the congregation could see the priest. Yes it’s that crowded! 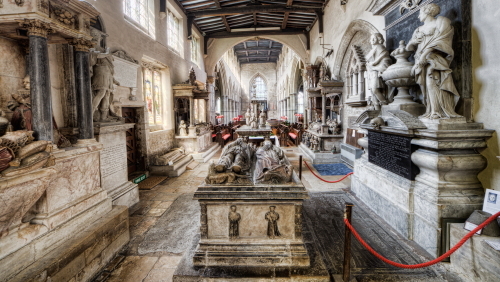 The oldest memorials are by the high altar with an inscription to Robert de Roos and an 18 inch effigy of him. Other memorials include two 15th century tomb chests to William Lord Roos and John Lord Roos (1441 and 1421) some early brass memorials to a Henry de Codynton, rector died 1404 plus others.

The main Rutland memorials are for eight Earls, consecutive from the 1st to the 8th. The 2nd Earl’s tomb has two effigies being displayed under a dining table which represents an altar whilst kneeling weepers appear above. The 7th and 8th Earls monuments were completed by Grinling Gibbons. The 8th Earl and wife are clothed in Roman dress with symbols of death. The grand 6th Earls monument has him lying prone with one wife above him and one below as if on a slope. The canopy touches the chancel roof it is so high and with its columns and projections it’s a wonder they fitted it into the chancel space. It is also perhaps the most famous monument due to its association with witchcraft and sorcery which is mentioned in the inscription. This tells of the Earls achievements and travels and the deaths of his two sons ‘in infancy by wicked practice and sorcerye’. The two boys sit at his feet holding skulls depicting their death in early life. Three women servants from Belvoir Castle were arrested, a mother and two daughters. The mother died apparently after choking on a piece of bread which she asked for to prove her innocence. The two daughters confessed and were hanged at Lincoln gaol in 1618. 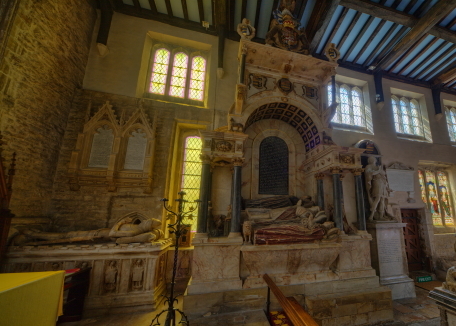 This church is easily one of the most spectacular in the two counties and has much to recommend it. Yes it has a chancel full of fine sculptured monuments and a spire that perhaps is the finest I have so far seen. But if you go to south aisle there lies the recumbent figure of ‘The Fair Maid of Normanton’. Although not a recognised member of the Belvoir family legend has it she is supposed to have been a somewhat ‘flighty’ member of the household and on account of this lay in the churchyard until 1905 when she was brought inside. I quite liked that story.
There is some parking available around the church and there are lots of facilities in the village. If you are visiting the church then there is plenty to do in the area – perhaps a visit to Belvoir Castle, or vice versa? 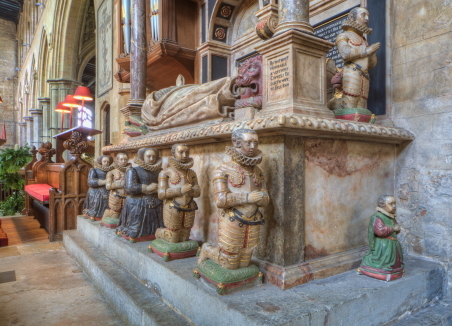 Visit St Mary at Bottesford you will not be disappointed I assure you. They also have some excellent guide books where you can read more on the church and the monuments you could spend many hours there as I did.