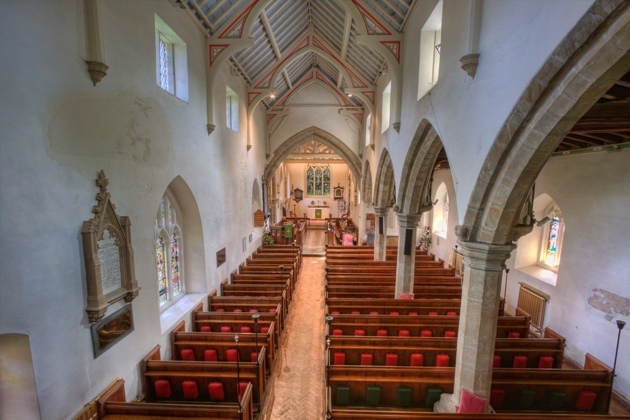 Blaby nave and chancel from gallery

Blaby lies 5 miles south of Leicester in the district of the same name. It is a large village of 6,500 people near to Whetstone and Countesthorpe with Wigston to the north and the suburbs of Leicester. It does have a ‘old village’ conservation area near the church which is attractive, there is the 15th century Bakers Arms which used to be a Yeoman’s house and the old village schools. 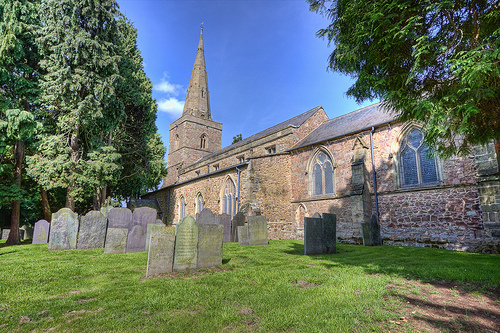 External shot of south side, chancel

Originally a Danish settlement, the first mention of the church was in 1140 when William de Lodbroke built the church in Blaby for the newly founded Abbey of Leicester. Countesthorpe was part of the parish and remained so until 1878. In the 13th century one of whose who held land in Blaby was a John de Blaby of the Lodbroke family. In 1290 the church and chapel at Countesthorpe was valued at £20 in Pope Nicholas’ Valuation.
In 1327 Hugh de Lodbroke built the major part of the present church in Early English style, in the 15th Century the manor of Blaby passed from the Lodbrokes to the Saviles when the last heiress of the Lodbrokes was married to a Thomas Savile. In 1484 the Bishop of Lincoln visited the church, the clerestory windows in the nave date from this period. 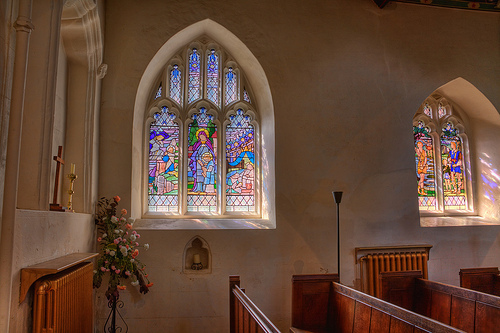 A tragedy occurred in 1739 when a Thomas Staines fell to his death whilst carrying our repairs to the steeple. In 1748 Edward Stokes became rector, blind from the age of eight after a pistol accident, he remained in Blaby for 50 years, he spent much of his own wealth on the schools in the area and on pastoral care for all its residents. He lived on until 1798 and died aged 92. There is a memorial to him on the north side of the east wall.
The church has a west tower and spire, chancel (13th C), nave and south aisle with vestry on the north side. The south aisle (early 14th C) has a fine beamed roof built by a Rob Biggs in 1630, this has been renovated and the date and his mark can still be seen. There is a fine west gallery in the nave which is an interesting feature, installed circa 1740 by Thomas Exon it has fluted pillars and is a very nice design. 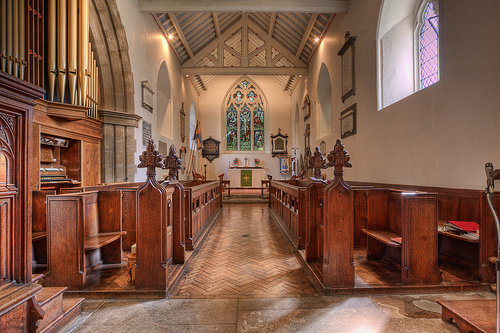 The church underwent major renovation work undertaken by the Revd Henry James Hoskyns M.A using some of his own monies in 1846. The church was reopened in 1847 and the roof was completed by Stephen Fry ( he also worked on Thurlaston church). In 1857 a second phase of work began, the tower which had been in a semi-ruinous state since 1828 when the spire was struck by lightning was re-pointed and repaired, they also installed a lightning conductor. The chancel was restored and the windows replaced for the sum of £220, they also built a new stone porch to replace the brick version. From 1900 to 1914 there were ongoing repairs and renovations, the spire was rebuilt from base to tip during this period. 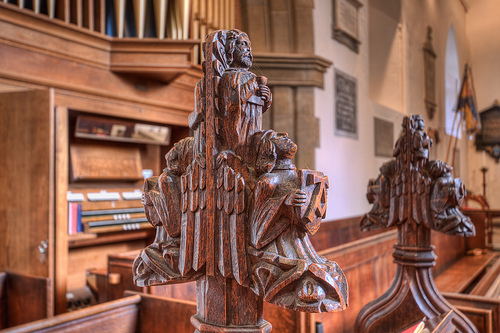 In 1951 new stained glass and tracery was installed in the windows of the nave some of these (if not all) were paid for by public donation. They are very nice examples of more modern stained glass.
Blaby still has some character, more so than some neighbouring villages and the area around the church is very pleasant for such a built-up area. There is car-parking nearby, plenty of amenities and it has easy access. The church is usually locked but services are still held and I am sure you would be made most welcome.