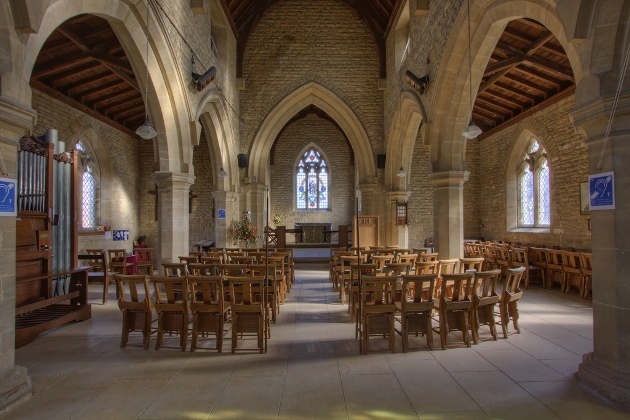 Bisbrooke is a pretty little village that is just a couple of miles east of Uppingham close to the A47. In the 2001 census it had a small population of 219. Most of the writeup for this text is taken from the excellent Bisbrooke History at the Rutnet site.

The church was totally rebuilt in 1871 in the style of a 13th century by a Mr Langley an Uppingham architect. The church of St John the Baptist was built for £1200. The previous church which was built in the 13th century had become neglected by the mid 19th century and so was rebuilt. The old church consisted of chancel, clerestoried nave, north aisle and south porch. There was a bell-cote over the west gable. The present church built of coursed ironstone with lined interior of dressed stone has a north vestry, chancel, clerestoried nave, north & south aisles and west tower with north entrance at base. 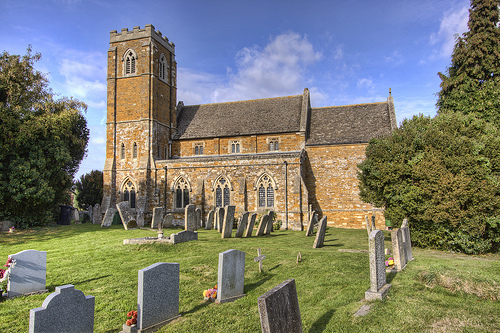 The tower was not completed until 1914 and contains one bell cast by Taylor & Co of Loughborough in 1871. There was an intention to add a spire to the tower but it was never completed. The font and pulpit are modern, the stone floor has been relaid in limestone and there are modern amenities along the west wall of the nave. The organ, by Eustace Ingram of North London, stood for 80 years in a Carmelite Priory near Ware in Hertfordshire before being bought in 1977 for £1000 and removed, transported and installed for £500 more. The organ is dedicated to the memory of Emmy Smith who was church organist for 50 years. 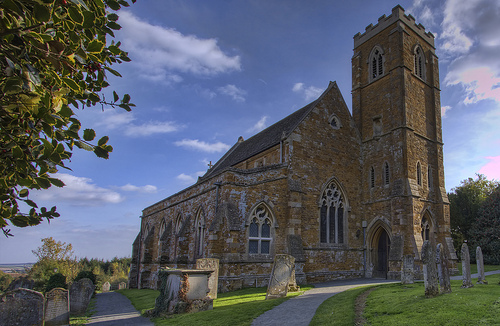 In the East window is stained glass depicting the risen Christ with His symbols of glory, and Alpha and Omega, the signs of eternity and continuity. The window was commissioned by Gwen Strawson in memory of her husband Aubrey, an insurance agent of Craven House, who died in 1962. Above the South aisle are two lights showing Jesus blessing children. Installed in 1911 and costing £51.00, they are dedicated to “the glory of God in memory of Thomas Edwards, Marine Engineer, died 6 January 1910”. 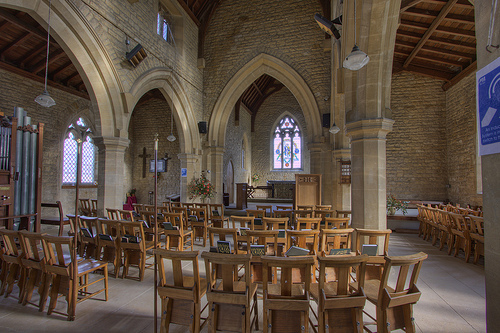 There are a couple of interesting anecdotes found on the British History site (link above and worth a read). Simon Palmer, the vicar of Bisbrooke (1575–78), seems to have been quarrelsome, and in 1578 he and ‘his wife Ellen did lay in the church from Christmas until Candlemas Day last and abused that place too shamefully to be writed.’ It appears, however, that later vicars were non-resident for want of a house. In 1595 ‘Mr. John Ridgley would not receive the Communion when the minister did minister it unto him, unless they received it sitting.

We all enjoyed Bisbrooke, it has been one the best ‘modernised’ churches we have visited, remarkable is also the fact that the Victorians rebuilt it as a 13th century church. There is small car park to the east of the church, access for wheelchair users should be OK. This church is usually open and is well worth a visit, a peaceful beautiful building….

The church at Bisbrooke is usually OPEN. More information here.