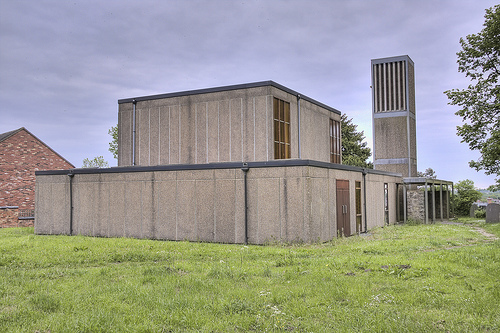 Bagworth Church built in the 1960s

Bagworth is approximately six miles to the west of Leicester and forms a parish with Thornton its neighbour, there is however at present a church in each village. It lies now in the National Forest but was once home to one of the most productive coal mines in Britain, however this came to an end in 1991 and like so many other villages in this area of the county that relied on mining many changes have taken place.
Although Bagworth ended up being a mining village it has a very long history going back to the Domesday book where it is recorded it had a population of 35 and Thornton was part of the manor. Both Lordships belonged to the Earl of Leicester but around 1238-9 they passed to Stephen de Seagrave. By 1347, a Robert Holland was lord of the manor of Bagworth and Thornton, but after his death his wife Maud granted the manor to the Thomas Langley the Bishop of Durham. 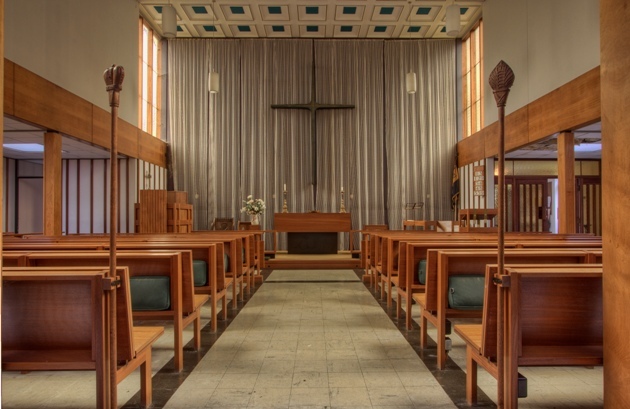 View of the interior of Bagworth Church

On April 17th 1474, King Edward IV. granted Sir William Hastings licence to wall-in and inclose the manor of Bagworth and Thornton with lime and stone, also to fortify and embattle it with lime and stone. This area became known as Bagworth Park and there was built a moated fortified house to the east of the current village which was probably built by Robert Banaster  in 1616 who had purchased the manor of Bagworth from William Harrington. Sir Bryan Cave had possession of the mansion but in 1629 he owed so much money to a Henry Skipworth that the property became forfeit. By 1632 the Park was owned by Frances Manners. She resided here during the Civil War when it was garrisoned with around 50 men. After the fall of Leicester on 31st May 1645 the garrison quit at Bagworth Park and the house was demolished. By 1769 the ruins were taken down and a new farmhouse built on the site where it is still there today. 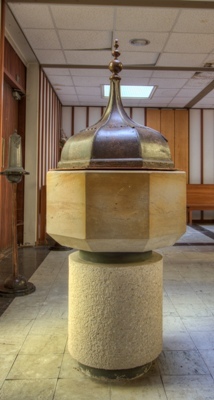 There was scandal in the village during the first part of the 18th century. This was taken from Nichols. “About the year 1707, Matthew Bott, a smith who resided at Bagworth (and who was afterwards executed at Leicester for forgery), having some iron stolen from his shop, a very remarkable discovery took place in consequence”.

” The suspected thief was one Glass, who had lived many years in one house, in an incestuous manner, with his sister, by whom it appeared he had several children; for, on searching his house for the iron, the peace officer and his party found two children in a basket with a cloth sewed over them; and almost immediately afterwards a discovery was made of other two infants, quite dry, upon the side piece of the house. In the dunghill also before the door, which had not been removed for some time, were found the bones also of children. The woman, upon the first discovery, struck a penknife into her throat, and threw herself into a horse-pit in Thornton liberty: she was taken out almost immediately, but dead. She was buried, after the coroner’s jury had sat, in the crossroad, Mary Lees, and a stake driven through her body. The man fled, and it is believed was transported for a theft from Northampton.”
Quite a horrific story and being buried at cross-roads was usual for suicides at this period, they would not be allowed to be buried in hallowed ground. 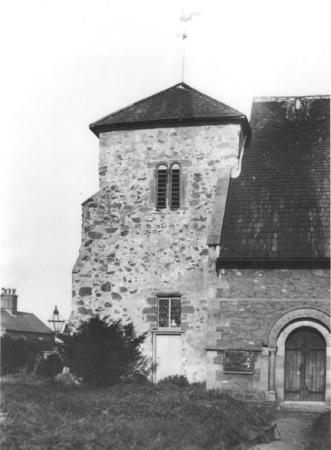 Earlier Church in 1960's before demolition

In 1828 when the colliery was opened the population began to grow, but in 1976 there was a massive decline over a period of eight years – one in three people left the village due to subsidence from the coal mining (above image note the different roof compared to Nichols engraving below). Sadly the subsidence also resulted in the Norman church being demolished in 1968 that had stood in the village for centuries. However a new church was built in its place by Blockley, Goodwin and Warner and this prefabricated concrete building is what we have today. 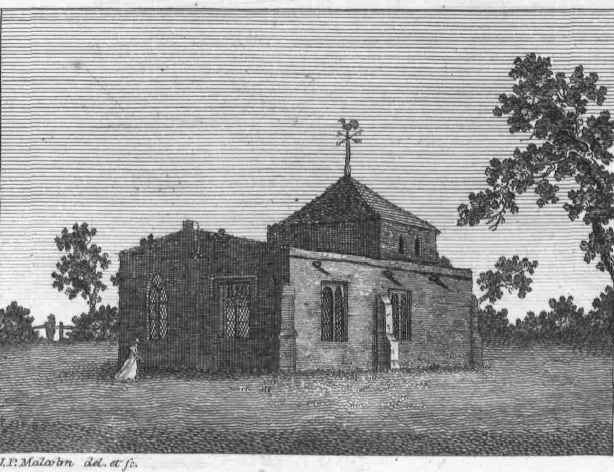 1793 Engraving of the original church from north-east

Nichols reports the original chapel consisted of a nave and north aisle, separated by three arches and built of local forest stone. The short tower housed three bells and the church was entered through the south door with its Norman arch. The south wall also had a ‘handsome piscina’ with pointed arches.  The engraving shows the chapel from this period above. 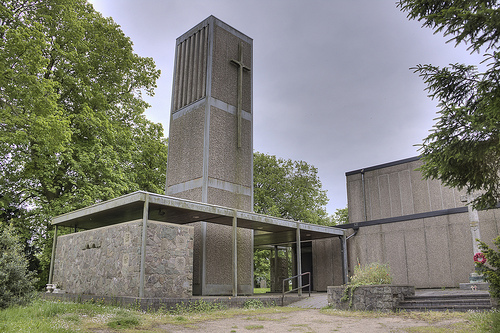 The new church consists of a square building of two tiers and a covered walkway which leads to the separate tower which houses two bells. There are remains of the Norman church built into the walls which you can see in the pictures on this page. One of them seems to be the original Norman arch that stood above the entrance to the original church and there are some other remains cemented into the new walls.
Inside we have a lobby and then the main ‘nave’ as such which is a square room with two ‘aisles’ and a high central roof. The altar is on a slightly raised platform at one end. I did not expect to see much of interest if the truth be known but I was pleasantly surprised by the church and its very symmetrical lines. The font is from the previous church (apart from the base), rest of the furniture  is modern, around the back of the nave are modern facilities with kitchen, vestry and toilet. 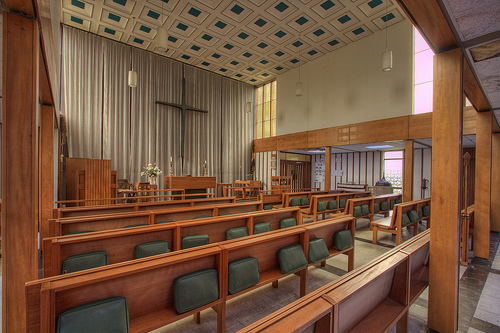 The interior of the modern church

The future of the church now looks in doubt and there are discussions on whether the building should be demolished and a memorial garden put in its place. Although services are still held at the church there are other churches nearby such as Thornton and perhaps the level of communicants at Bagworth itself is not enough to save this modern church. Many other churches of course have little support in the rural villages but these are usually listed and cannot be demolished – but I wonder how they will all survive in the coming decades.
Access is fine with only a few steps but there is a short incline to the churchyard and church. The gravestones are all in situ and there are some walks from here across the fields. I do not think there is a pub, the only one I saw was closed down like so many more in the county but there are facilities in Thornton. The church at Bagworth may not be the most attractive or impressive building but it is worth visiting in order to look at a ‘1960’s designed church’ something which in reality is very rare, and could be ever rarer should it be demolished. We will see what transpires but it looks as though Bagworth may lose its church and be without one for the first time in nearly a 1,000 years and that is a shame.
I would like to thank the churchwarden who allowed and organised access to the church and I am grateful for the information he passed on. The website link has some info the village and sound clips – worth a listen.