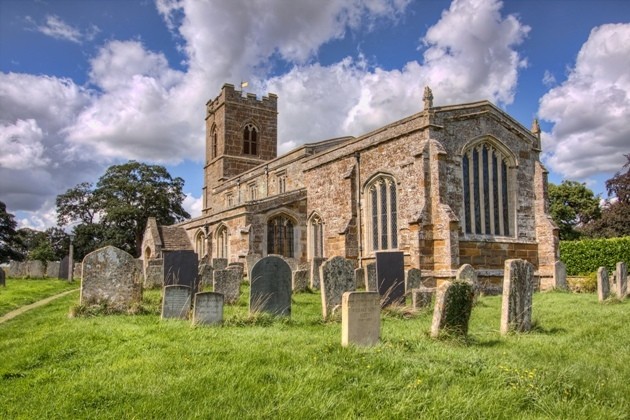 The pretty situated church at Ayston

Ayston is just a mile north-west of Uppingham but some 17 miles east of Leicester just off the A47 in the county of Rutland. In the 2001 census the population was 46.
The village does not appear in the Domesday book, but like other villages in the area was part of the seven hamlets of Riddington (Belton-in-Rutland which is on this site was another such hamlet). Ayston Hall was built in the early 19th century and sits by the church (although not in view but hidden by some awful Leylandii). There was an earlier Hall as Henry I is reported to have stayed there on 23rd Sept 1275. 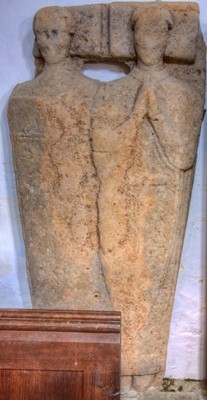 Knight and Lady lying on pillows

In 1203 the manor was held by the Murdac’s then the de Boyvills and by 1510 it had been sold to Sir Robert Brudenell who held it until 1801. It was then inherited by George Fludyer. In 1919 the Finch family inherited the manors of Ayston and Wardley.
The church of St Mary the Virgin is mostly 13th century with some later additions. It consists of a west tower, nave, north & south aisles and chancel. The oldest part of the church is the west end of the nave followed by the north aisle. In the 14th century the south aisle and tower were added. The south porch is 15th century as well as the chancel. The chancel was refitted in 1937 including the east end window, but the nave furniture dates from around 1800 and includes box pews. 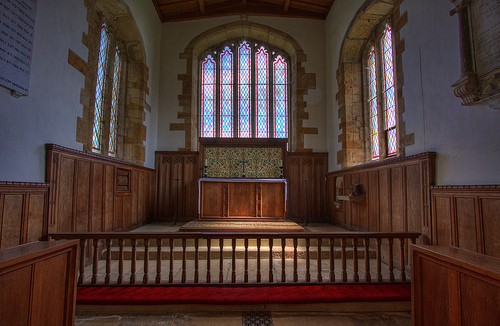 Chancel which underwent major restoration in 1937, I liked the plain east window.

There is a monumental slab in the North aisle which is badly worn, it was originally in the churchyard and probably depicts a Knight and Lady lying on pillows but no other information is known but I would hazard a guess it may have something to do with the earlier Hall. The font is 18th century, the finest window is the late 14th century East window in the south aisle. The window next to the porch contains pieces of old glass including three with the arms of the Brudenell family. 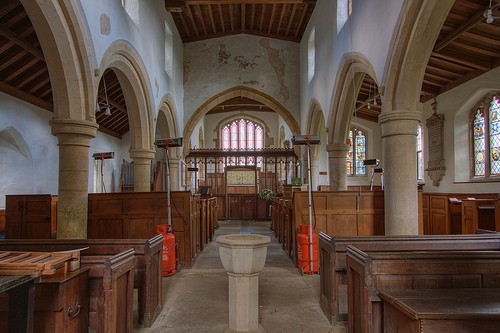 There is some painting discovered on the nave walls which show a Royal coat of arms above the chancel arch (probably 17th century) and some general floral patterns on the north nave wall. 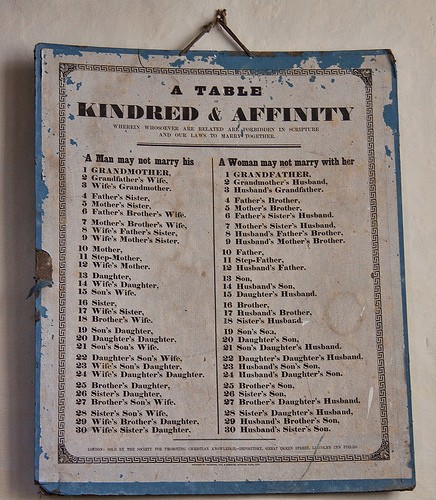 A table of who were you not allowed to marry – is it still correct?

To get to the church is not that clear on arrival in the village, but if you park in the main street of the village you will see a row of cottages with lawns in front opposite a stone wall. This is the grass path to the church, there is a path of sorts. I did not park very well, and a combine harvester could not get past my car and the main road through the village was blocked! They eventually found me in the church, quite embarrassing. The church apart from the ugly gas lighting is quite attractive and set in a lovely village.