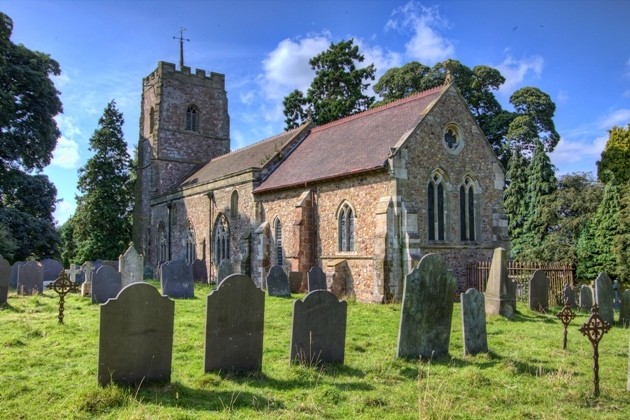 Ashby Magna is recorded in the Domesday book as Asseby or Essebi, in medieval times this was a large village and the population has stayed static at a round 300-400. It is 9 miles south of Leicester and its nearest neighbour is Dunton Bassett which the M1 motorway lies between.
The church lies on the high ground in the village and was built about 1220 by a Robert Esseby, a descendant of William Peveril who held the manor after the Norman Conquest. There was probably an earlier church on the site before but none remains in the present fabric. The church has been restored many times and the oldest parts of the church now reside in the north aisle and arcade which are 13th century. 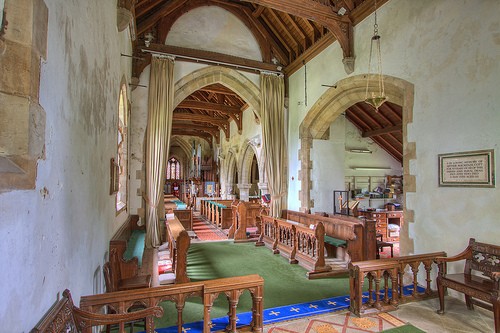 The church consists of a tower, nave, north aisle, vestry and chancel. The tower dates from the 14th century, and the original entrance is thought to have been through the west tower. The nave and south windows were restored in 1860 as well as the removal of a decaying gallery and pews. Also added at this time was a bath stone pulpit and font. The original font’s location and whereabouts are unknown. 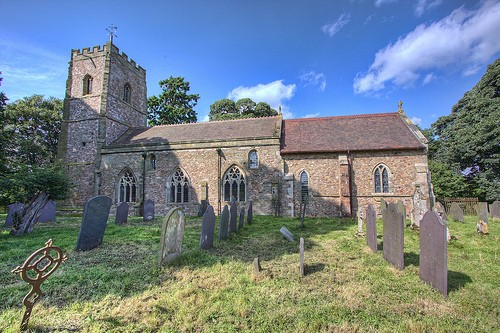 South view of Ashby church, for some reason I took no pics of north side or aisle.

In 1907 the chancel was heavily restored, the floor of the chancel was raised and curiously the Victorians used some tiles with the City of Cardiff’s motif on them, perahps they were unaware of this or someone was from Wales….I jest of course. They also added the wording above the chancel arch.
There is medieval piscina in the chancel and aumbry recess on the north wall. The church has a nice ‘homely’ feel perhaps because of the different carpets and rugs scattered around the floor of the nave and chancel. The organ seems large and out of place in its present location and perhaps resided in the chancel area or against the west tower arch. The engraving in 1795 in John Nichols, History and Antiquities of the County of Leicester, shows an entrance on the south side (as so many churches originally had). 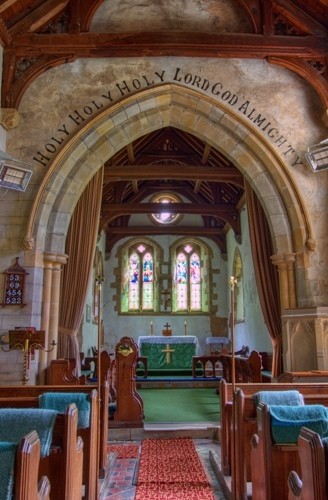 The Victorian stencilling above the chancel arch

The church is worth a visit, it is in a nice location and as can be seen it is still cared for. They are trying to raise funds for some repairs which are required. If you are nearby please visit, I believe it is open during the day.
On our visit, I notice the churchyard had a novel way of grass control – a small team of friendly sheep. Of interest in the churchyard are many iron graveposts, many are badly worn, but they seem to date from late 19th century, perhaps a local blacksmith was making these. I have not seen any others in graveyards so far, hopefully someone can give us more information. For some inexplicable reason I have no pictures of the north side or aisle I will return when passing and complete this entry.

This church is usually open at weekends to visit.