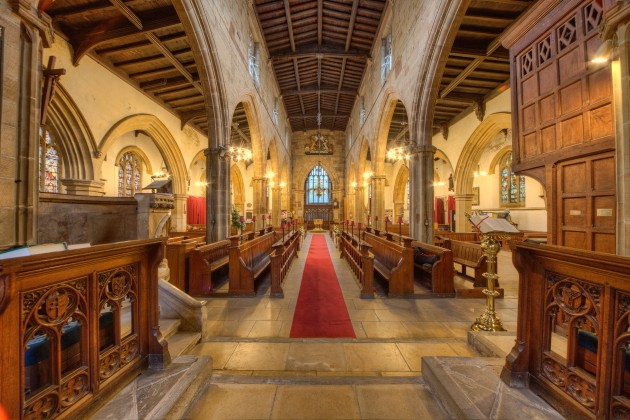 With a population over 12,000 Ashby is a small market town in the northwest of the county of Leicestershire. It was once the largest town in the area but nearby Coalville became its larger rival in the 19th century. It is famous for its fine castle ruins (under the care of English Heritage) and was once a Victorian Spa town.
The name ‘Ashby’ means ‘Ash tree farm’ or ‘Ash tree settlement’ and derives from the Danes who settled in the area from the mid 8th century. The rest of the town’s name is derived from the Norman French when the town became into the possession of the La Zouche family during the reign of Henry III. 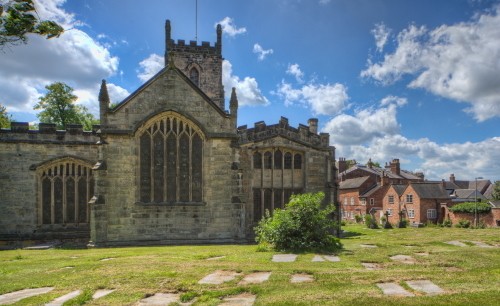 East view of church, the Hastings Chapel can be seen on the left of the picture

The Hastings family acquired the town in 1464, there was already a castle in the town but the Hastings rebuilt the castle with its large keep (you can still climb the ruined tower with fine views over the town and there is an underground tunnel from the keep to the kitchens). During the Civil War the town was one of the major ‘Royalist’ strongholds under control of Henry Hastings 1st Baron of Loughborough, after a long siege in March 1646 the garrison and town surrendered and the castle was ‘slighted’ (basically made ruinous) so it could not be used by any forces. 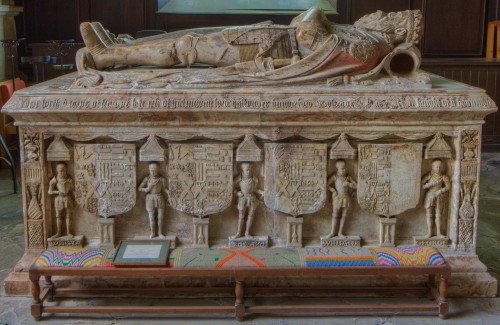 Earl of Huntingdon alabaster tomb who died in 1561 in the Hastings chapel.

The church of St Helen’s is a large church with many interesting features. It consists of a nave, west tower, north & south aisles and the Hastings chapel which sits as a trancept from the chancel. The church was built in the late 15th century by the Hastings family with a Victorian restoration in 1878-80 by J. P. St Aubyn when the aisles were added.
The pulpit and font also date to the Victorian restoration although there is also an earlier font within the church. At the west end of the nave there is a 300 year old finger pillory which would have been used to punish those who misbehaved in church, an unusual and rare find in a church today. 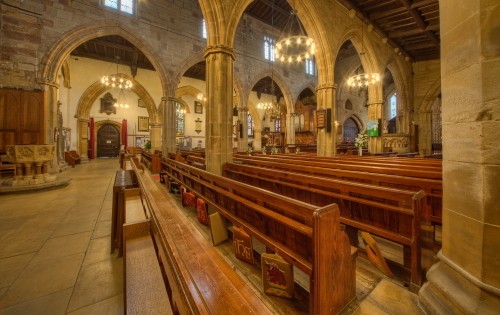 View across nave to north aisle with the high arcades

The Hastings Chapel contains some impressive monuments and tombs to the Hastings family. We have 2nd Earl of Huntingdon (d1561) in an alabaster tomb with two effigies with vases as decoration, there are also mourners separated by shields with a script. A wall monument to the 6th Earl of Huntingdon (d1698) on the east wall with a lion and unicorn holding a shield. Another monument to the 9th Earl of Huntingdon (d1746) designed by Kent and carved by Joseph Pickford and Rysback is a standing wall monument with a obelisk in relief and a vase with a demi-figure of his mourning wife Selina. Selina, the Countess of Huntingdon, who with the aid of the famous preacher George Whitefield introduced a form of Methodism into aristocratic circles. There is also a monument to the 2nd Marquess of Hastings (d1844) in the chapel.
In other parts of the church we have in the north aisle a alabaster effigy of a pilgrim (stated to be one of only two in the country) and in the south aisle on the south wall above the door a really fine colourful frontal demi-figure of Margery Wright 1623 which I really liked. 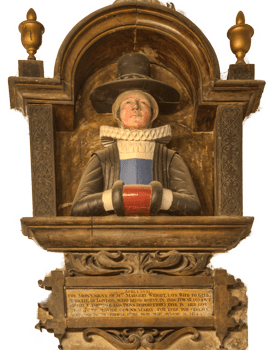 St Helens is in an attractive position with the ruins of the castle to the south and the churchyard enclosed to the west by some old brick built buildings. Ashby itself is a fine town with a small museum, the castle ruins (within easy walking distance of the church) and many shops and places to eat. There is ample parking around the church and it is always open from 10:00 to 16:00 daily.
I also have a connection with Ashby, I am related to the Canner family (on my mothers side) and many of them lived in the town from the 18th century onwards. In fact in the late 19th century a William Canner painted the church of St Helens so it was a special visit for me. This church should be on your list to visit; it has some fine monuments, is an imposing building and with its other nearby attractions is an easy choice to make for an afternoon outing.