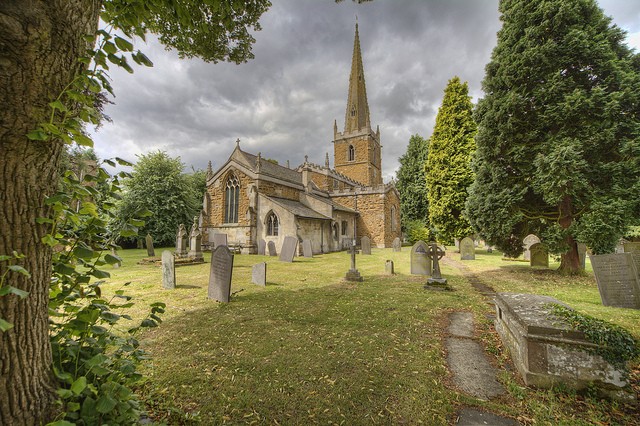 Asfordby Church from the north-east

Three miles to the west of Melton Mowbray is the large village of Asfordby of around 3,000 people. It is thirteen miles from Leicester and sited in the Wreak valley by the Eye river. The village was known for its large scale coal mining operation which started in 1984 but closed in 1997 due to the low price of coal and geological difficulties. 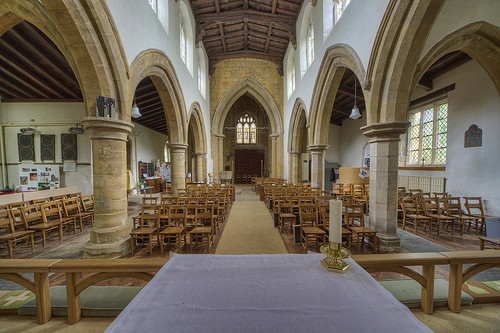 The arcades and west tower arch, there is a kitchen and toilet facilities.

The village has been known as Osseberie, Osferdebie and Offerdebie, it is recorded in the Domesday Book and was given by Robert Earl of Mellent & Leicester to St Mary de Castro in Leicester and then onto St Mary de Pratis. Sir FRancis Gregory of Asfordby was steward to Simon de Montfort, Earl of Leicester in 1240. By 1547 the Bishop of Lincoln passed the manor to Edward VI, and by 1761 during the Enclosures most of the land was held by Thomas Smith Esq. 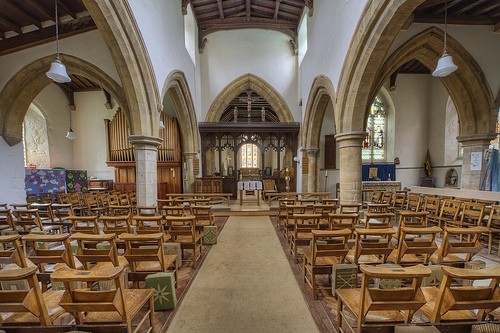 The church consists of a west tower, north & south aisle, nave, south porch and south trancept and a chancel. The ironstone west tower has battlements, pinnacles, great gargoyles and a fine recessed spire and dates to the Perpendicular period (1380-1520). The clerestory windows also date to this period as well as the roof which has supporting wooden angels on corbels along the nave. From the south we have very weather worn sandstone exterior fabric with a south porch which leans against the trancept and its west aisle. 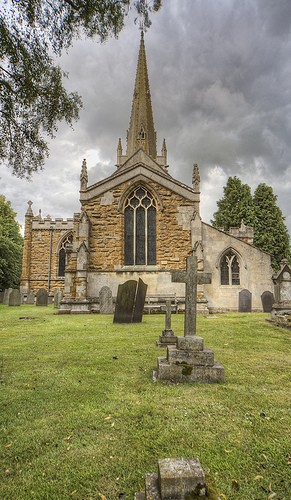 View from east of the slender window which matches the tall elegant spire,

The north arcade has octagonal piers with the south having circular ones with a seat around one of the bases. The chancel was restored by G. G. Scott in 1866-67 and further work was undertaken in 1868-69 in the church. There are Saxon sculpture in the south aisle which may have belonged to a cross. There is a crude figure with a round head holding a cross and giving a blessing surrounded by scrollwork. 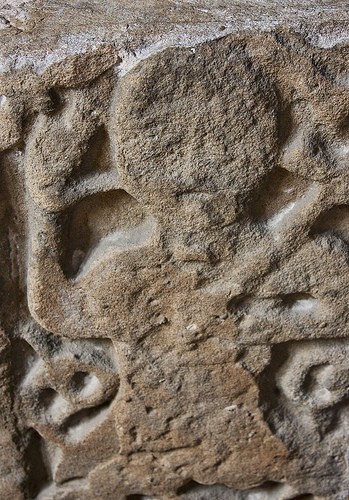 I always complete a internet search on the churches when completing the write-ups and I found the attached below concerning The Rectory Poltergeist;
This is an account of the poltergeist activities in the Rectory now called “the Old Rectory” in Asfordby in 1913.

The then Rector, the Rev F.A. Gage-Hall, was said to have, at last, put into practice his Technical Exorcising Attributes and with due ceremony to have commanded the spirit or spirits to depart. The inhibition was successful and Asfordby Rectory was troubled no more. No longer did residents, visitors and servants find their bedclothes torn away from them in the middle of the night by a spirit whose physical powers defied mortal resistance. The old mansion had peace.
When the present writer curiously enquired at the rectory of Mr. Gage-Hall’s successor he was met with the usual disclaimer “it is all nonsense” and claimed that it was Mr Gage-Hall’s own freakish imagination. There had been, it was true, occasionally easily explained noises but he entirely depreciated any talk or public mention of ghosts at Asfordby Rectory because such gossip made it difficult to obtain or retain servants.
The Rectory is a large mansion of the 18th Century and at the time it was reputed to be actually haunted the Rev H. Strudwick, Vicar of a neighbouring parish, slept several nights in a haunted room and related that on the very first night he was alarmed by a violent tugging of his bedclothes, he held on as tightly as he was able but in vain, the ghost won the tug-of-war and stripped the vicar of his covering. “All I could see” he said “was a pile of disordered bedclothes on the floor. I searched the room thoroughly and everything was in order. The door was locked on the inside and no-one could have entered but when the same thing happened the very next night I was glad to change my room”. A Sister-in-law of the Rector subsequently slept in the same room and h ad the same alarming experience to narrate to a small group of scared folk in the middle of the night.
An extract from the Haunted House by Charles G. Harper. 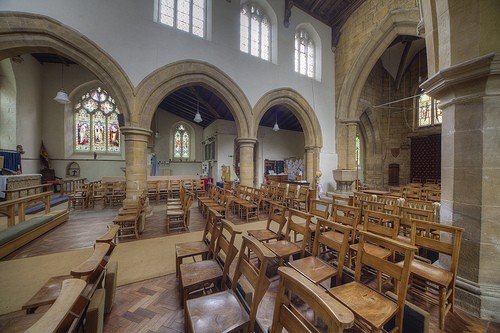 There is parking by the church and plenty of facilities in the village, however the church is locked at present. It is a pleasant church and with its Saxon carvings and other items of interest should you find it open it is worth a visit.