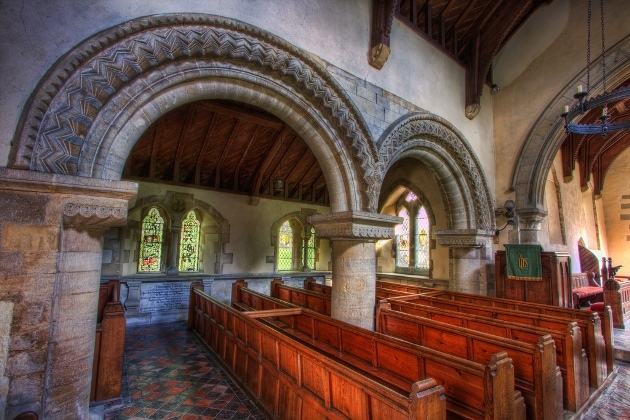 Only just in Leicestershire, this small pretty village of approx 60 people lies off the busy A47 which separates it from its near neighbour Belton-in-Rutland. It lies some 15 miles east of Leicester and 3.5 miles west of Uppingham, separated from Rutland by Eye Brook which runs just north and forms the boundary with Rutland. The area around Allexton had for many years been wooded and was part of Leighfield Wood during the early medieval period. Countess Judith held the manor in 1086. In the reign of King Henry I the forest and surrounding land was used for hunting, he made the greater part of Rutland and some of Leicestershire into a Royal Park between 1100 and 1135 as well as created the barony of Oakham. It was not until the 17th century that the area became finally disafforested.
In around 1248 the area became lawless mostly by the notorious Peter de Neville (the Neville’s held an estate at Allexton in the 13th-14th C). He was forester and his misdeeds and actions went on for many years. It is recorded that he imprisoned some men in his house at Allexton when the prison floor was flooded instead of using the gaol at Oakham. Eventually in 1276 he was hanged in Shropshire for theft. The earthworks of the 13th century manor house of the Neville’s are north of the church by the brook. 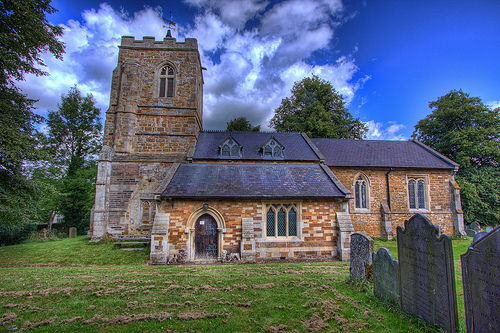 The church of St Peter’s sits on small hill and the earliest parts of the building date from around 1160. It consists of a west tower, nave, chancel, north & south aisles and a vestry. The oldest part of the church are the two arches in the northern aisle with their Norman zigzag pattern on one and a lozenge pattern on the other. These were rebuilt in the Victorian era but they used the original materials. The north aisle was built as the same time as the original building, the south aisle was added in the 14th century by Sir Robert Blount who held the manor at the time, however this was demolished in the 16th century and then rebuilt in the 19th. 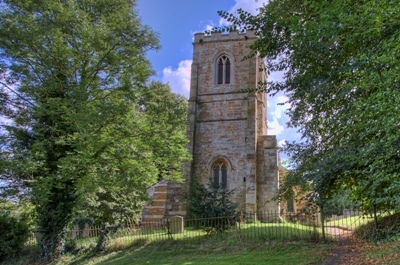 The tower was added in the 15th century, again by the Blount family and topped with a small spire. Because of the hill and shortage of land to build the tower, it was built within the west end of the nave. There were originally three bays to the arcades (you can see the start of the third – just) but this was reduced to two after the tower build. The south porch was added in the 16th century and the two lions by the door were mentioned by Nichols during his tour in 1791. In 1862 major restoration was undertaken and the architect William Millican of Leicester was employed by 6th Lord Berner to complete the works. He fitted the unusual but very attractive dormer windows in the south facing roof to add more light. 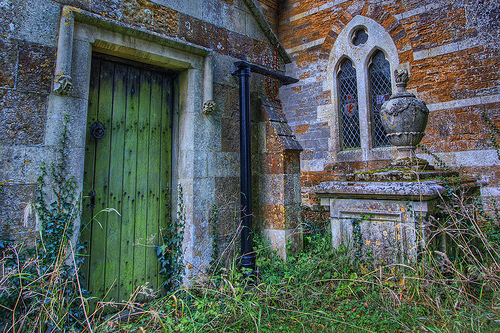 By the old north door near to the vestry stands the grade II listed Hotchkin tomb with urn which originally had iron palisades. Thomas Hotchkin who died in 1774 made his wealth from plantations and slave trading in the West Indies. It is recorded that he said to friends that on his 45th birthday he would stay in bed all day as it would be the apex of his life and it would then forever be in decline.  He was correct as the following day he died  ‘having been most miserably cut and mangled, of a fistula’. 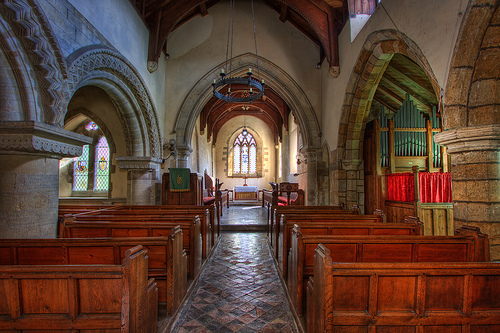 View through nave to chancel showing the aisle arcades

The chancel has a 14th C piscina set in a ogee arch, the plain font in the south aisle also dates from the 14th century but was re-cut in 1862. Fragments of 15th C glass survive, but other stained glass dates from the 17th century. The church struggled for parishioners in the 20th century and eventually in March 2000 the church was made redundant. It was passed to the Churches Conservation Trust who completed essential repairs and it is now open to the public. 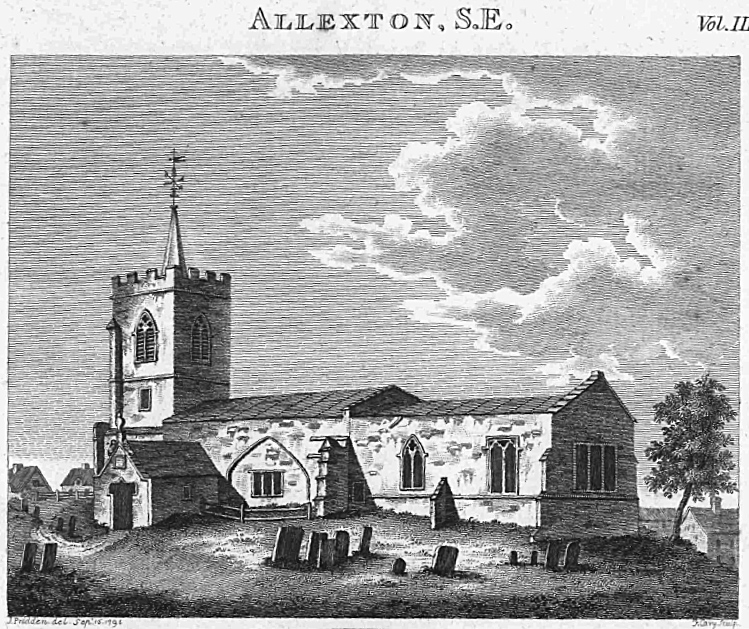 St Peter’s is well worth a visit, the Norman arches are superb and the church is set in a pretty location. The dormer windows and south view are especially fine. There is parking by the church and the nearest public house is in Belton-in-Rutland, many more facilities can be found in nearby Uppingham.
This church is now under the care of the Churches Conversation Trust where you can find details of opening arrangements. On my visits it once was open and once you had to fetch a key from nearby house.

Chris Stafford Notes;
Nestling in a quiet valley close to the Rutland border, Allexton is a small, but prosperous village, the overwhelming smell here was of horses, the fields around the church were full of them, half the Quorn hunt must live within a stones throw!
On pulling up at the crowded layby by the church I knew something was going on, there was a roofing engineers van, an electricians van and a private car already outside. The CCT surveyor, whose car it was, was quite chatty and I soon found out Allexton was undergoing its six yearly check over, thankfully the building was in good order and the surveyor was happy to give it a clean bill of health.
The crowning glory of this small, compact church is its fine late Norman 2 bay N arcade, with lots of zigzag detailing, most pleasing, restored by W. Millican in 1862. Otherwise there is a composite window of medieval bits of glass in the N aisle and some canopy work in the tiny vestry, I also liked the unusual dormer clerestory windows put in by Millican.

ALLEXTON (St Peter) – Stained Glass Information
Wyrley, 1592,
Burton, 1777,10
Gules two bars Argent three horse-shoes Or (Bakepuize).
The same coat with a mullet on the uppermost bar.
Gules three poll-axes Or (Hakluit).
Smythe 1748 : “a figure of a man with arms on his surcoat”:
Azure crusilly of crosses botonny and three fleurs-de lis two and one Argent (Beresford).
Nichols III, i, 11: Part of the Bakepuize arms in the north aisle westmost.
LC, 04.11.1862 :”New 3-light east window.” “Three pieces of stained glass windows of the C14th taken out of the church before commencing the restoration are in the safe keeping of the Rev. Mr Norris, the curate of the parish. Two of them consist of collections of different glass especially rich in rubies. The third is the arms of Bakepuize.
“Or (!) two bars argent three horseshoes in chief Or (ex Ferrers) Rev J Hill.
KD, 1881, 475: Chancel E a modern stained glass window in the decorated style and north aisle fragments.
Pevs, 72, C14 stained glass in the vestry and C15 in a window in the north aisle.

Chancel E
3 lights 1862, possibly by Ward & Nixon or Ward & Hughes
cl A medallion of the Crucifixion set in silver-stained flower-patterned quarries in the remaining lights.
No dedication.

N aisle E
2 lights Thomas Willement
Quarterly of six 1 & 6 Sable a gryphon rampant and in chief a fleur de-lis between two annulets or (Wilson), 2 Argent a bend within a bordure engrailed sable (Knyvet), 3 Argent a cross engrailed gules between four water bowgets sable (Bourchier), 4 France modern and England quarterly, 5 Quarterly vert and or (Berners). Motto: Le bon temps viendra (The good time will come).
As 1 & 6 above with a demi-gryphon rampant issuant from the topmost point.

N aisle NE
2 lights
Armorials:
Sable a gryphon rampant or in chief a fleur-de-lis argent between two bezants (?annulets) impaling gules a chevron between three quatrefoils or.
The same with the impalement reversed.

N aisle NW
2 lights C14 fragments
lhl A male figure with a book, organ pipes, broken inscriptions and an ox-head (from a Nativity scene).
rhl A figure in black holding a flail, thuribles and a bell, two male heads and broken inscriptions.